The Waterkloof Four: It’s water under the bridge, boys 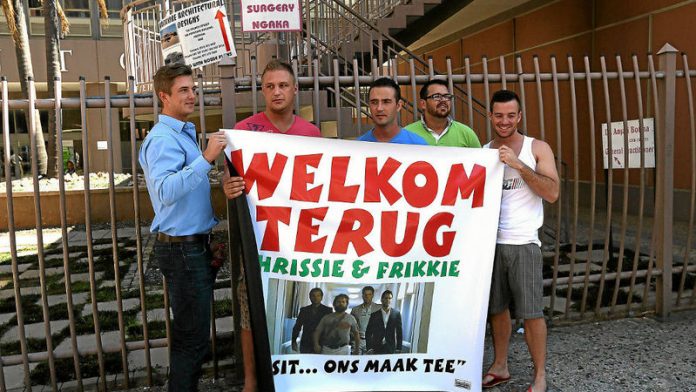 A vendor gives me directions to the ­sloping, triangular park, roughly the size of a football field, in the suburb of Moreleta Park in ­Pretoria East. It is a short, uphill walk to the west of the open-air taxi rank, via meandering, narrow ­suburban streets.

The park is in need of a trim, and is marked by footpaths, one cutting through its centre towards the rank and another one snaking towards the line of pine trees framing its northern edge.

In the week that the Waterkloof Four walked out of jail, in what felt like a strange pilgrimage, I visited the park in which they murdered a homeless man 12 years ago.

A resident on the nearby Tanya Street, who said he moved in after the murder, told me the park was overgrown at the time of the attack. According to vendors and some taxi drivers at the rank, all they knew about the man’s identity was that he was Mozambican.

Although bare and ragged, the park is surrounded by palatial housing, wide curbs, electric fences and sprinklers that spray out into the streets.

These are the houses Gert van Schalkwyk, Reinach Tiedt, Christoff Becker and Frikkie du Preez claimed they were protecting when they accosted their homeless victim on the night of December 1 2001. They became known as the Waterkloof Four, because that is where their ­ill-fated night began.

Victim
The four – aged between 14 and 16 – had been to a party and then to a Hatfield nightclub on the night of their crime. Two cars, with a total of seven teenagers, left the nightclub and drove south east to Constantia Park, where they kicked and beat a man outside a gym, according to media reports at the time. They then drove to the park, where they encountered their eventual victim and a number of other men. At their trial, the four said they believed the "suspects" to be in possession of stolen goods.

They caught their victim hiding behind a tree, and proceeded to beat, stab and kick him.

The man later bled to death, having suffered a deep stab wound to the leg and two gashes to the head.

The incident came to light only about 18 months later, after the other three teenagers told their parents what had happened. The parents called the then deputy head of the National Directorate of Public Prosecutions, Jan d’Oliveira, who ordered a full investigation.

The other teenagers turned state witness, but Van Schalkwyk, Tiedt, Becker and Du Preez first appeared in court on August 2003.

At their court appearance, prosecutor George Pieterse alleged that he had been followed by unknown young men in a car, who demanded that he give them the docket. The men, said Pieterse, chased him for about 15km, but he eventually evaded them. Later that night, he had received a call from a man ­offering to buy the docket.

On their first court date, it also emerged that the boys had threatened witnesses, and Becker’s father was asked to leave the court after making threatening gestures from the public gallery. Still, the boys were granted bail. In June 2005, all four were found guilty and, in May 2008, their Pretoria high court appeal was turned down.

Weapons
In his appeal judgment, Judge Willie Seriti said: "When one takes into account the weapons that the appellants used [including a ­hammer] and the fact that they failed to get him to hospital despite the fact that he was injured and he asked them to assist him, they had ­intention to murder him.

"When he asked for medical assistance, accused number two [Du Preez], instead of assisting the ­victim, kicked him. Furthermore, the first appellant [Becker], when he telephoned the police, gave them the wrong information. If he had given them the correct information, their victim could have survived.

"Appellants one [Becker] and three [Van Schalkwyk] argued about whose fault it would be if the man died. They argued because they realised that the man was seriously injured and that his wounds could cause his death. Their actions were so brutal, they realised that the victim could die from the injuries he sustained."

During their trial, Van Schalkwyk and Tiedt continued to believe that the man who bled to death from his stab wound was not the man they had beaten in the park.

According to a report on the Independent Newspapers website iol.co.za, advocate Johan Kruger, the state prosecutor during their Pretoria high court appeal, said that none of the four had got in touch with him to enter into plea bargains.

Magistrate Len Kotze, in the Pretoria regional court where the matter was initially heard, called Becker "a self-confessed liar" of "astounding arrogance".

Nameless man
The man the Waterkloof Four murdered has never been identified. If a body is not identified, the state ­mortuary stores it for a minimum of 30 days while trying to ascertain its identity. The body is then buried at a municipal burial site.

The four emerged from the ­correctional services head office in Pretoria on the afternoon of Tuesday February 11. Their eligibility for parole was brought forward by six months, in terms of the special remission of sentences announced by President Jacob Zuma on Freedom Day in 2012. They served five and half years of their 12-year sentences in prison.

Tiedt and Van Schalkwyk’s 18-month reprieve from jail under correctional supervision was to be taken as time served.

The four were greeted by journalists enraptured in particular by Becker’s sculpted pectorals and department store chic. Their newly acquired muscular physiques were mentioned in reports, with some claiming Becker’s quads were visible beneath his jeans.

Some of the men’s friends brandished a banner with a photograph of the four stars from The Hangover movie franchise, with the words "Welkom terug Chrissie and Frikkie. Sit … sit, ons maak tee [Welcome back, we’ll make tea]". The Times newspaper quoted Jean van der Schyf, a friend of Becker’s for 11 years, as saying that he hoped the public would forgive the four as they had paid the price and learned their lesson.