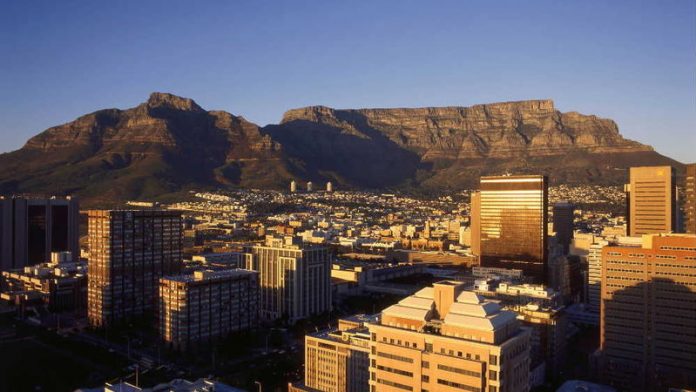 Today, the Cape Town city centre has half a dozen substantially taller buildings, with the latest, the Portside Tower, standing 139 metres tall. Not that you would notice all this hubris, so dwarfed is the city by the eternal edifice of Table Mountain. Approaching the coast from the north, it is only on the rare occasions when cloud completely obscures the mountain that Cape Town suddenly seems to have miraculously acquired a skyscraper city, and locals stare in wonder at their built environment.

The foreshore, where the building is located, has seen dramatic changes since the Cape Town International Convention Centre (CTICC) was erected in 2003. There are also ambitious redevelopment plans afoot for the surrounding properties, notably Artscape and the expansion of CTICC, as well as the new 15-storey high Christiaan Barnard Medical Centre adjacent to the building. The opening of the main MyCiti Bus terminus nearby has also given renewed importance to the area.

It is with all this in mind and a centenary year starting in December 2014 that the current owner of No 40 Heerengracht Street since 1981, Media24, has decided to give its 26-storey building a makeover. With only 70% of the north and south facades paned, and the east and west facades windowless, the surface is very different from today's glass towers, and provides ample canvas for designers to reimagine.

Speaking at a press briefing held on the 22nd floor, humorously known as the Nasdak (punning the Afrikaans word for roof – "dak" with Nasdaq), Media24 chief executive Esmaré Weideman said it was a good time to "spruce up this proud landmark" as the city celebrates a year of design as the fourth World Design Capital.

Winnings
This would be done through a competition open to South African designers from all disciplines with the winner receiving R200 000, and the runners-up receiving R80 000 and R40 000.

An implementation budget of R15-million has been set aside to see the design concepts become a reality.

Rashiq Fataar, founder of Future Cape Town, supported the concept and said it is time to "tell a new story of the foreshore". The rejuvenation should not just "be a new pretty face". Designers should consider "how it will speak to people" about the "possible future face for the city", said Fataar.

Indeed, the building was inaugurated by HF Verwoerd as "a monument to faith in the future". He said at the time: "Sanlam would not have erected such a building if they did not have faith and confidence in what lay ahead."

Confidence in the future proved well founded, though the future worked out rather differently from what Verwoerd envisaged.

The design brief for the competition refers to the entire exterior of the building, and states that the elevation of the building facing the traffic intersection on Coen Steytler Avenue and Heerengracht Street will become the most prominent vantage point of the building.

Preservationists can take some comfort in the knowledge that according to the rules of the competition, no alterations to the existing structure of the building will be considered, implying that proposals should "focus on additions to, installations on and visual solutions for the existing structure".

Submissions should also demonstrate relevance across all four World Design Capital 2014 themes and need to address key issues such as sustainability and broader community involvement in the realisation of the design initiative.