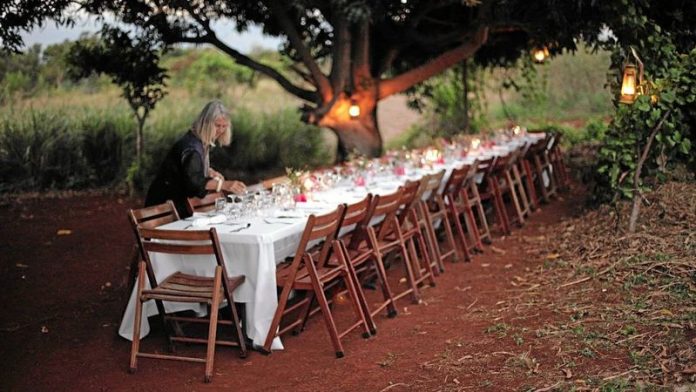 I am sipping a mango bellini at sunset under a full moon, beneath the very tree the fruit was picked from, about to have dinner on Dool's organic farm, where much of the food we will eat was grown.

Poncey food journalism is so peppered with words like "organic" and "locally sourced" that they barely register but this place couldn't be truer to these principles. And Dool's, in Pedro Plains, an area known as "the breadbasket of Jamaica", is anything but poncey. There is no big farmhouse on this organic smallholding – the dinner table is in a clearing beneath a tree.

By the light of the rising moon, I can make out the tops of the Saint Elizabeth hills in the distance and the dirt track that leads to our table – a short stroll down a lantern-lit path through a field of shoulder-high yam vines.

The table is simply laid with white linen, silver cutlery and small wildflower arrangements; the gnarled fruit tree above is festooned with hanging lights. Against a backdrop of murmuring wildlife, such humble surroundings demand that guests relax into the gentle, unpretentious mood.

It's impossible to resist the convivial goodwill – and the family-style seating will always throw up a surprise dining partner or two, a mix of islanders and tourists.

This farm-to-table dinner is held every month, on the closest Saturday to full moon, and features organic ingredients grown at Dool's and on other small farms in the area, prepared next to the table.

Sophisticated
Food is passed round in traditional Jamaican dutchies (metal cooking pots) but what is in them is far more sophisticated than the usual Caribbean tourist fare of jerk chicken and rice.

The menu varies according to season and each course is paired with wine. We had penne with lime-basil pesto, a goat's cheese crostini with a pea-and-mint salad – so fresh you could almost taste the farm – followed by lamb in a rich coconut and spice sauce.

The following day, I went to meet Dool (real name Rudolph McLean), who proudly showed me his crops – breadfruit, coconut, banana and cashew trees, and fields of mint, scallion, pumpkin, sweet potato and gungo peas – all covered in an organic mulch rather than chemical fertiliser.

The sixtysomething farmer is passionate about his style of farming. He only eats organic, he boasts. "Healthy and strong!" he says, thumping his chest.

The event is run by Jakes, one of the most progressive hotels in the Caribbean (although non-guests can attend) and is one of several community projects it supports.

It's a boutique hotel in the fishing village of Treasure Beach and cultivates a shabby-chic vibe – supermodels and New York hipsters can be spotted lounging around its beachside pool – but it is firmly rooted in the local community.

Sustainable fishing, farming and community projects are driven by the hotel's owner, Jason Henzell, who takes me on a whirlwind tour of the area.

Infectuous energy
It's Saturday morning and he has had just three hours' sleep after being up half the night at a Beenie Man gig but he's a ball of infectious energy. One minute we're drinking beer and talking to old boys in a roadside rum shack; the next we're meeting the Jamaican prime minister, who's in the area to open a well.

Henzell ups the patois with the rum-shack boys but I'm impressed when he talks to politicians on the same level – he winds down the car window and greets the prime minister with a breezy "Hi there PM!".

We then stop to look at the four new classrooms his community-action group, Breds, has built at a local school and to chat with a group of teenage boys about whether Treasure Beach could spearhead Jamaica's bid to host an international beach-soccer championship. (It clearly can't, lacking the tourist infrastructure and photogenic white beaches of, say, Montego Bay, but that won't stop Henzell trying.)

Jamaica is great fun and there was a lot I loved about the country, but it has a post-colonial air that is difficult to define (certainly on a two-week holiday) and feels rather heavy at times.

I felt it in the all places I stayed at or visited; everywhere, that is, except Jakes, which felt like a microcosm of how you would like modern Jamaica to be, as both a country and a destination. – © Guardian News & Media 2014

For more information on holidays in Jamaica, see visitjamaica.com