This is the work of a revolution 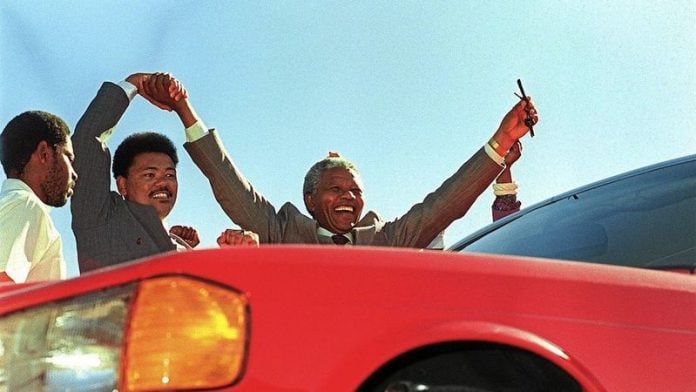 It was on a Sunday, a day of stalled alarm clocks, church and braai smoke across the land, when a grey-haired Nelson Mandela walked out of prison in his starched suit.

"It was crazy," recalls Groom in a new documentary film – part of an exhibition titled Red – by artist Simon Gush and collaborator James Cairns. "People were dancing, singing, ululating. It was basically a party."

"What now?" Groom and his co-workers wondered as they returned to the assembly line. Gush's documentary, which functions as a kind of informational guide to his three sculptural objects on show at the Goethe Institut in Johannesburg, chronicles the optimistic response by Mercedes-Benz workers.

It was Groom who first mooted the idea of producing a car for Mandela when workers assembled in a room christened Geneva to flesh out "What now"?

"Some wanted the day off," says Groom, who still works for Mercedes, albeit in Gauteng. "I said, you know, Mandela offered up 27 years of his life. Let us do something for him." The assembled workers clapped. A mandate had been agreed upon. The next step was notifying the factory's owners and management.

Statement
"It wasn't an approach, it was simply a demand or statement about building Mandela a red car," Ian Russell, formerly a human resource manager at Mercedes Benz, recalls in the documentary.

The German-owned company saw merit in the proposal and agreed to supply the raw materials. Workers in turn agreed to an hour of free overtime to enable the car's production. The style of the luxury sedan, like its eventual colour, was the source of some deliberation. "We wanted the best for Mandela," says Groom.

As any Mercedes fans will attest, the best necessarily means a two-door luxury rocket on wheels. Workers thought a high-end sports model inappropriate. Mandela, they reasoned, was a statesman: it was unlikely he would ever pilot the car bearing the famous three-pointed star emblem. Instead they proposed making the W126 series 500 SE luxury sedan, which included patented innovations such as airbags, along with heated seats and traction control.

When he was released in 1990, Mandela was not a rich man, something plainly visible in Peter Magubane's photos of the former political prisoner enjoying his first home-cooked meal in his bare Vilakazi Street residence.

Mandela nonetheless paused when he was offered the luxury car. Five months later, on July 22 1990, the origin of the gesture duly confirmed, Groom personally handed Mandela the keys to his new car at the Sisa Dukasha stadium in Mdantsane.

Gush's exhibition, entitled Red, includes body panels from a 500 SE. They are not from the original car, which is owned by Daimler, the parent company of Mercedes, and currently on loan to the Apartheid Museum. In 1998, when Daimler announced a R900-million investment in their East London operation, they presented Mandela with a new S-class Mercedes.

There is a tendency, whenever Mandela's name is invoked, to slip into a warm and fuzzy place. While Gush's exhibition allows for this, it sets out to challenge simplistic readings of our recent past. Red also explores what happened after Mercedes-Benz workers answered the question "What now?".

Ugly
In short, things got ugly. On August 16 1990, workers embarked on a nine-week wildcat strike. The strike, which Gush first heard about through his father, Labour Court judge David Gush, was largely prompted by worker dissatisfaction with the car maker's agreement to participate in collective bargaining at a national level. In 1989 the National Union of Metalworkers of South Africa negotiated a R5.50 an hour national wage for car workers – a meaningless figure in a factory where workers already earned R5.62.

For two of the nine weeks, striking workers occupied the Mercedes-Benz factory, sleeping on beds made of scaffolding, foam, upholstery and car headrests.

Gush, whose neo-conceptual practice exploits the suggestive power of objects as metaphors of broader historical and social contexts, has recreated these beds. Like the series of worker uniforms he asked fashion designer and style icon Mokotjo Mohucar to make for his show, the beds are imaginative props – or "speculative reconstructions", as Gush prefers.

Art about politics is a high-wire act. It must balance creative expression with a diagnostic function.

Ayanda Mabulu and Brett Murray's recent paintings about President Jacob Zuma were both adequate in diagnosing a condition, but poor examples of creativity.

Gush – who has previously worked on a series of speculative proposals for a new Congress of South African Trade Union logo based on his research into the current, artist-designed logo – is an entirely different proposition.

He may just be our Vladimir Mayakovsky, an art worker for the revolutionary avant-garde.

At least, that's my diagnosis.