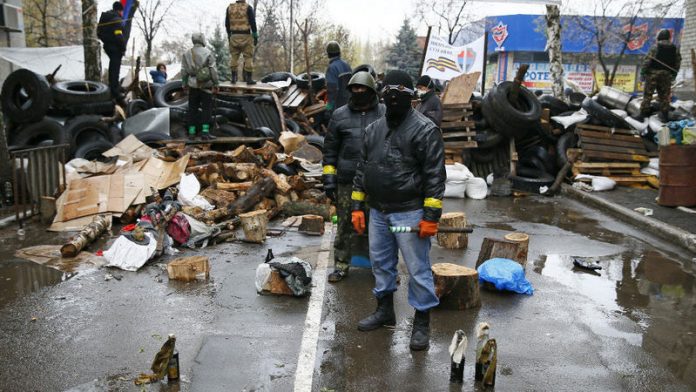 Ukraine's government said on Sunday it was sending security forces into the eastern city of Slaviansk where pro-Russian militants have seized control in what Kiev describes as an act of aggression by the Kremlin.

Any operation to dislodge the armed militants risks tipping the stand-off into a new, dangerous phase because Moscow has warned it will act to protect eastern Ukraine's Russian-speakers if they come under attack.

Interior Minister Arsen Avakov said security units from across the country had been brought in to launch an "anti-terrorist operation" to re-assert Kiev's control in Slaviansk.

A Reuters reporter in the city, about 150km from the Ukraine-Russia border, said two military helicopters were flying over the town's police headquarters where militants were holed up.

"Pass this on to all civilians: they should leave the centre of town, not come out of their apartments, and not go near the windows," Avakov wrote on his Facebook page.

In the nearby town of Kramatorsk, militants exchanged gunfire with police late on Saturday, though there was no confirmation any one had been hurt.

Novosti Donbass, a local internet news site, said that government forces had taken down two rebel barricades at entry points into Slaviansk, but there was no independent confirmation of this.

Residents in the town did not appear to have heeded the appeal by Avakov and families were out on the streets on their normal Sunday business.

Relations between Russia and the West are at their most fraught since the end of the Cold War, the result of a row over Ukraine that began when the Moscow-backed president was pushed out, and Moscow annexed Ukraine's Crimean peninsula.

In Washington, the White House expressed concern that the seizures of public buildings in eastern Ukraine could be a prelude to a Russian military incursion, though Moscow has strenuously denied any such intention.

"We call on President [Vladimir] Putin and his government to cease all efforts to destabilise Ukraine, and we caution against further military intervention," said Laura Lucas Magnuson, spokesperson for the White House National Security Council.

US Vice President Joe Biden will travel to Kiev on April 22, becoming the most senior US official to visit the country since the crisis began there.

Moscow justified sending its military into Crimea, on Ukraine's southern tip, by saying the Russian population there was under threat, and some in Western governments believe the Kremlin is preparing a similar scenario for eastern Ukraine.

Russian Foreign Minister Sergei Lavrov has denied any such intentions and said instead it was Ukraine's Western-leaning government, viewed by the Kremlin as illegitimate, that was stoking the tensions.

Any use of force against Russian speakers "would undermine the potential for cooperation" between Moscow and Western powers over Ukraine, Lavrov said in a statement after a telephone call with his US opposite number John Kerry.

United Nations Secretary-General Ban ki-Moon said in a statement he was deeply concerned about the deteriorating situation in eastern Ukraine and "the growing potential for violent clashes".

The crisis over Ukraine could trigger a "gas war", disrupting supplies of Russian natural gas to customers across Europe. Moscow has said it may be forced to sever deliveries to Ukraine – the transit route for much of Europe's gas – unless Kiev settles its debts.

For now though the focus of the crisis was in eastern Ukraine, the country's industrial heartland where many people feel a close affinity with neighbouring Russia.

Nato says Russian armed forces are massing on Ukraine's eastern border, while Moscow says they are on normal manoeuvres.

On Saturday, in what had the look of a coordinated action, pro-Russian militants, some of them armed, seized public buildings in several towns, challenging Kiev's already shaky control over the region.

In Kramatorsk, about 15km south of Slaviansk, gunmen seized the police headquarters after a shootout with police, a Reuters witness said.

Website Novosti Donbass said armed men had also thrown up barricades at a military airport there while others continued to occupy the town council building as well as the police headquarters.

The attackers were a well-organised unit of over 20 men, wearing matching military fatigues and carrying automatic weapons, who had arrived by bus. Video footage showed the men taking orders from a commander. Their identity was unclear.

Their level of discipline and equipment was in contrast to the groups who have occupied buildings so far in Ukraine. They have been mostly civilians formed into informal militias with mismatched uniforms.

Ukrainian police appeared powerless to intervene, and it was not clear if local security forces were still taking orders from Kiev. The police chief for the Donetsk region, which includes Slaviansk, resigned after pro-Russian protesters picketed his headquarters.

In Slaviansk, militants blocking the road leading into the city from the north set fire to tyres and trees, hoping the smoke would hamper any operation by government forces.

By the side of one road leading into the city, a group of women were praying with a priest. Not far away, a group of about 12 armed men in combat fatigues, helmets and balaclavas and carrying automatic weapons appeared to be monitoring people on the road.

"We want to join Russia. We would be very grateful if Russia helps us," said a gunman in the centre of Slaviansk who gave his name as Alexander, wearing camouflage fatigues and a black balaclava mask. "We will stand until victory. Honestly, it's not scary for me to die for freedom."

Ukrainian commentator Sergei Leshchenko said the burst of activity by pro-Russian groups was an attempt by the Kremlin to secure a strong negotiating position before international talks about Ukraine.

Representatives of Russia, Ukraine, the United States and the European Union are due to meet in Geneva on Thursday for the talks.

Russia is expected to argue for a revamp of Ukraine's Constitution to give a large degree of autonomy to eastern Ukraine, something Kiev and its Western backers reject.

"Russia will come to the talks with the position that 'Donetsk and several neighbouring regions are already ours – now let's talk about federalisation'," said Leshchenko, a commentator with the Ukrainska Pravda newspaper. – Reuters