Long and the short of it: How Africans have shrunk 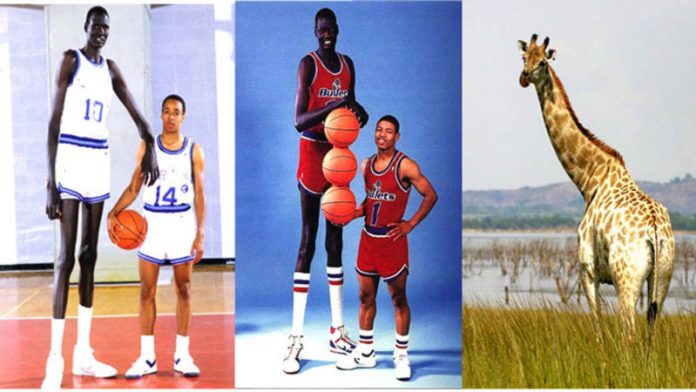 If South-Sudan born basketball player and political activist Manute Bol were alive, he would have celebrated his 52nd birthday on October 16.

But that won’t be. Bol died on June 19 2010 in Charlottesville, Virginia, in the US. Perhaps Bol, at 2.3m in height, is most famous for being one of the tallest men ever to play in the National Basketball Association (NBA).

He might have stuck out in the modern age, but in ancient Africa he might not have been noticed as much.

The Africans of days gone by, who were supposedly “primitive” or “backward”, did much better than us today in one area – they were taller, suggesting that they had more nutritious diets than we do.

The tall shall rule the world
Africa was actually taller than the world average until the 1960s, when the gap closed and the trend began to reverse. Now, the average 24- to 35-year-old in Africa is 1.4cm shorter than his age mates around the world.

Height shouldn’t matter – but it does. Numerous studies show that tallness, particularly in men, does confer many social and economic benefits. Tall men have better success with women and are more likely to be married and have children.

Employers have been shown to prefer tall candidates in job interviews, and are likely to offer them bigger salaries. One study showed that for each inch in height, a person earned about $789 a year more in pay; so a six-foot (1.8-metre) tall person would earn $5 525 more each year than someone who is five-and-a-half feet (roughly 1.5m).

Tall men apparently also have higher self-esteem than short men, and this confidence is often interpreted as innate leadership qualities (whether deserved or not), and this has sneaked into our lexicon – we “look up” to people we admire but “down” on those we despise.

Malcolm Gladwell, in his book Blink, quoted a study that indicated 30% of American chief executives were 6.2ft (1.9m) or taller, but only 3.9% of American men in general were 1.9m or taller.

A stunning report by the Organisation for Economic and Co-operation and Development (OECD) titled How Was Life: Global Well Being since 1820 gives the trends of human stature among different populations around the world since the 19th century – and gives us a hint on how people fared in the past.

The OECD study reveals that Africans born in the 1870s all the way to the 1940s grew up to be one to two centimetres taller than the world average, suggesting that despite a high infant and child mortality, and a heavy disease burden, things weren’t so bad – as Europe and America were battling the squalor and overcrowding of the Industrial Age, African children in the villages were happily getting their bellies full.

But the trend began to reverse in Africa starting with children born in 1930s; by the 1950s, they grew up to be just 0.2cm taller than the rest of the world.

From the 1960s, children born in the rest of the world had caught up with Africa, and in the subsequent decades the downward trend continued, such that African 25- to 34-year-olds – those born in the 1980s – are now 1.4cm shorter on average than their age-mates around the world.

Africa loses it
The data also indicates that Africa is the only region in the world where average height has been declining since the 1960s. (The 1990s and beyond is not included in the data set because those born in these decades have not yet achieved their full adult stature).

Looking at the differences between three countries – Kenya, Nigeria and South Africa – also reveals some intriguing trends. In Kenya and Nigeria, average height has increased steadily since the 1880s, with Nigeria experiencing slightly more fluctuation.

There was a slight dip in the three countries in the 1920s, when a severe drought ravaged much of Africa, creating local food shortages and at times extensive cattle deaths.

But Kenyans born in the 1980s are now the tallest of the three as adults at 171.2cm, nearly as tall as Egyptians and Chinese, and taller than Indians, Indonesians and Mexicans.

In the 1890s, South Africans were the tallest of the three, hitting 170.4cm, which made them among the tallest in the world at that time, even taller than the average European or American.

But from the 1930s and 1940s – coincidentally or not, as apartheid came into force and the society became more and more unequal – the downward trend had begun such that by the 1980s, South African children born during that decade have grown up to be shorter than their counterparts in Kenya and Nigeria.

It would seem that height is one of those things hard-wired into the genes; one is either tall or not, and there is nothing much that can be done about it.

Society’s standard
However, although individual difference between people is largely genetically determined, differences between groups of people is much more influenced by the quality of nutrition and healthcare during the first three years of a child’s life, so much so that scientists use height as a proxy indicator for health and by extension, a society’s biological standard of living.

(There are exceptions of course, the “Pygmies” of Central Africa are genetically shorter than average, and the South Sudanese – like Bol, tend to be very tall – but generally, nutrition makes the difference in height between groups of people).

Height is also a good indicator of well being because it is straightforward to measure, and difficult to “dress up”; other parameters such as school enrolment, GDP, wages and national income are easy for governments to fudge.

According to the researchers, the most important determinants of how tall a population is likely to be are the disease environment, and the availability of high-quality proteins (chiefly meat and dairy products).

This is because humans need large amounts of protein to grow in stature and create antibodies that will fight off disease, and the human body reduces its growth if it does not have enough food beyond a certain minimum. Therefore by measuring height, we can tell the nutritional quality of a society.

Even though there is a moderate influence on height during the teenage years, the impact on height is greatest from birth to age three, so the birth decade is used as the reference point in measurements.

Male heights are used in the dataset for two reasons – one, male heights are historically more available, as more men were in situations where measuring was done – for example, when enlisting in the military.

Secondly, there are those who argue that for evolutionary reasons, females are more resilient than males to adverse nutritional conditions, so male heights give us a better indicator about how well a society was eating.

This goes way back
In general, women prefer tall men for the evolutionary advantages that being tall brings: one theory is that a tall man is likely to be strong, too, and so able to be a better hunter and protect his family from attacks.

Being fit and physically imposing were arguably important leadership qualities in ancestral human environments – perhaps especially for males – where being a leader entailed considerable physical risks.

But other thinkers say that there is no evidence that height is necessarily correlated with weight, strength or leadership qualities, it just seems so. In any case, just the perception that tall men are stronger – and so better mates – appears to be enough to give them an edge over their shorter counterparts, a kind of self-fulfilling prophecy.

Evidence even shows that taller women are more likely to have twins; the likely reason is a hormone called insulin-like growth factor, which has been positively linked to both height and twinning. The US study showed that multiple-birth mothers averaged 5.5ft (1.5m) tall, more than an inch taller than the US average for adult females of about 5.3¾ft (1.6m).

But the data also shows that although globally, height increased from the 1880s as societies became richer, the differences also became more pronounced, particularly within social classes.

One study quoted in the OECD report indicated that the height gap between rich and poor populations within Nigeria was wider than between an average low-income country and the US, and rich African children are as tall as American children. By the 1980s, the gap between poor and rich countries was as small as it has ever been in the 20th century, with the biggest differences now between social classes within the same country.

This article first appeared on mgafrica.com