‘The fight is not over’ – Numsa to fight Cosatu expulsion 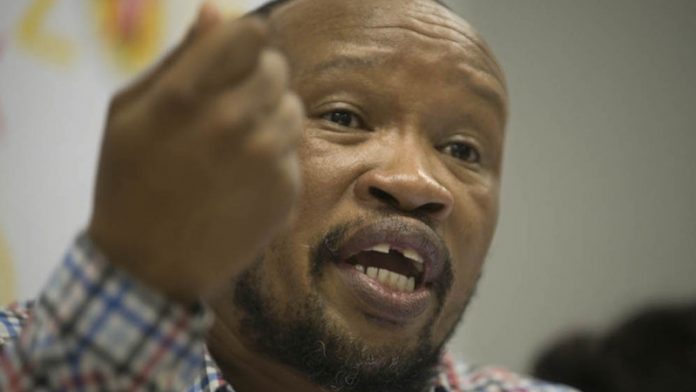 The National Union of Metalworkers of South Africa (Numsa) has promised to fight its expulsion from Cosatu, through the mobilisation of workers around the country, with the possibility of court action still on the table.

Numsa was expelled by Cosatu’s central executive committee late on Friday night. Numsa’s general secretary, Irvin Jim, at a press conference on Sunday said the union would lobby both Numsa and Cosatu members to reject its expulsion in the form of countrywide meetings. He said the Numsa would use the meetings to “educate” workers about the political situation within Cosatu. Numsa will also forge ahead with its plans to launch a “united front” in December this year.

Jim said it would be this united front that would decide whether or not to participate in the 2016 local government elections. Jim said the Economic Freedom Fighters, “like all leftist forces” would be invited to join in discussions about launching its united front.

Numsa launched an unsuccessful court action last week in an effort to stop its expulsion. But the matter remains on the court roll and Numsa has not ruled out the possibility of pursuing it. “We might end up in court very soon … there is absolutely no basis for Numsa’s dismissal,” Jim said.

‘The fight is not over‘
According to Jim, Numsa would organise around all workers in the federation to defend Numsa. “The fight is not over,” Jim said. “We have been rejected by Cosatu, but we have not been rejected by workers.” Jim was adamant on Sunday that the reason for Numsa’s expulsion was tension within Cosatu between those loyal to the ANC and the South African Communist Party on the one hand, and those loyal to the working class.

Jim accused Cosatu president and ANC NEC member S’Dumo Dlamini of being the “kingpin” of a plot to “liquidate Numsa in the federation”. And, Jim said, ANC secretary general Gwede Mantashe was responsible for “pulling the trigger” against Numsa.

“Mantashe can look for the nearest cliff and jump.” “Publically Mantashe likes metalworkers, but he’s got a project against them. “It’s only a moron that can’t see that the strategy is to drive wedge between Numsa’s leadership and its members,” Jim said.

“NUM lost members massively. Do they care about the fact that they lost members? We don’t think so,” said Jim, who called Baleni a hypocrite. “He led the fight against Numsa. Now he is saying that a mere apology would have saved Numsa. We reject his fooling of the public,” Jim said.

Jim added that other union affiliates had also violated Cosatu’s constitution but they had not been expelled. Cosatu’s leadership has taken serious issue with Numsa’s decision to recruit members belonging to other industries.

Jim said this key point of contention between Numsa and the NUM had led to the latter’s pursuit of Numsa’s expulsion. He said that when the Association of Mineworkers and Construction Union started recruiting NUM members in the mines, Numsa had raised the possibility of increasing its scope to bring mineworkers back into the federation.

But NUM, Jim said, did not like the idea.

Meanwhile, Cosatu’s secretary general, Zwelinzima Vavi, was “next” on the “list”, said Jim. But he would not be drawn on Vavi’s plans following the expulsion of Numsa. Numsa was Vavi’s key ally during his suspension from Cosatu, which was subsequently overturned by the courts.

At the heart of the conflict, Jim said, was a “project” led by members of the ANC/SACP alliance to protect capital and undermine a workers’ agenda. Numsa rejects key policies of the ANC, in particular the National Development Plan, which it calls a “cut and paste” document stolen from the Democratic Alliance’s policies.

Jim said on Sunday that these policies have replaced the Freedom Charter. “Cosatu is consumed by internal battles between those who support the ANC and those who consciously fight for independent, militant federation which stands for the working class,” he said.

“We know there is a special project of individuals, many of whom who have been rewarded by positions in Parliament; they are working to liquidate Numsa. “It’s a well-coordinated, reactionary attack on workers. This Cosatu boardroom struggle is not about the interests of workers. “They have managed to achieve what apartheid failed to do – to destroy the federation.”