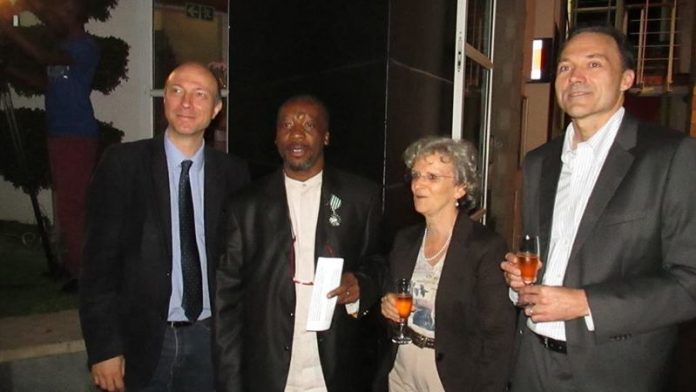 Filmmaker Ramadan Suleman’s eldest brother had a knack for memorising movies; each scene and dialogue. He would argue with his friends over a movie they had all watched at the cinema outside their Durban home.

The filmmaker recalls overhearing the arguments, which become the fuel that ignited his love for film.

He has since given us films such as Zulu Love Letter (2004), which was selected in major international festivals such as Venice and Toronto, and his first feature film Fools (1997), which is regarded as South Africa’s first all-black feature film.

His work has received numerous accolades that include the Silver Leopard award for direction at the 50th International Locarno Film Festival in Switzerland in 1997, Pan-African Film and Television Festival of Ouagadougou in Burkina Faso, the Fespaco in 1999 and the Special Jury prize for Best Script 2001 for Zulu Love Letter, at the Grand Prix du Meilleur Scenariste in Paris, France.

But it’s the different papers written by academics on his work that he feels are his highest achievement. “I’m humbled as a filmmaker that when you type my name into Google, you’ll be able to see the amount of theses written on my work. I’m humbled by that, not by box office numbers,” says Suleman.

His recent achievement was an order from France. The French ministry of culture from the French embassy of South Africa recently awarded him with the Order of Arts and Letters (Chevalier des Arts et des Lettres), which honours the significant contributions to the arts, literature in France and abroad, made by an individual.

“It’s an honour to have the French and your peers recognise what you have done. Whereas where you are there is no specific recognition for what artists do in our society.”

His relationship with France dates back to 1984, when he received a scholarship to study film in Paris. He also continued his studies in London. The renowned director called the City of Lights home for eight years before returning to South Africa. Fools, which is an adaptation of a Njabulo Ndebele short story, was produced by a French producer and since then, he has been collaborating with producers from France, with his films often being screened in the European country.

Transformation in SA
Even though his work is viewed and appreciated internationally, he still would like to see the South African film industry transform into an enterprise, something it’s struggling to become, and for South Africa to cultivate consumers who’ll consume culture.

Sitting in his offices at Youth Filmmaker Project in Milpark, Johanneburg, Suleman shares his views with the Mail & Guardian on the current state of the country’s film industry. Today, he dons a sweater, beanie and scarf; an outfit appropriate for the cold and grey-sky weather of Johannesburg. If one had to describe Suleman’s films in weather terms, the word “sunny” would not be one of them. His work zooms in on social problems and South African’s history.

Ready to talk about the world of film, he sits down, crosses his legs and with his red-framed spectacles hanging from his neck, he begins to share what he is working on. He is currently producing the feature film Russian Princess, which is based on a short story by Mozambican writer Mia Couto. The film doesn’t have a release date yet. Suleman says: “My team and I are now busy editing feature films made by the filmmakers that we mentor.”

He is currently a mentor to young upcoming filmmakers enrolled into the Youth Filmmaker Project, an initiative by the National Film and Video Foundation. When he began his career, he didn’t quite have someone holding his hand, but having a background in theatre prepared him for a life behind the camera.

Not only did he study theatre at the Action Centre in Newton in the 1970s, but he is also one of the founders of Dhlomo Theatre – the first black theatre in South Africa.

A lonely world
The artist’s world, according to Suleman, is a lonely one. “When you are writing or working on a film there is no crowd. Your mind is constantly functioning and you spend so much time perfecting your work. You spend about a hundred hours for a two-hour applause.

“The loneliness makes you vulnerable because the focus is on you and on what you have done and at some point you panic that nobody is interested in your work.” The loneliness, he says, can be dangerous.

“Hence we have seen our young people committing suicide because they are not prepared for that harsh world.” But he thanks his wife Marie Chantal and his children for supporting him.

In order to support young talent, the Youth Filmmaker Project takes aspiring film graduates through a six-month programme where they taught all there is to know about the art and business of filmmaking. The ambassador of France to South Africa, Madame Elisabeth Barbier, referred to Suleman during the prize giving ceremony on November 13, as a leading figure in South African cinema and a man of character and conviction.

Suleman indeed does not bite his tongue on issues close to his heart.  His work often deals with self-identity, and as writer Rory Bester puts it: his work focuses on social responsibility and the struggle for “meaning and identity”.

These themes are also found in the works of celebrated African filmmakers Med Hondo (Mauritius), Sembéne Ousmane (Senegal) and Souleymane Cissé (Mali), who Suleman greatly admires and has meet and worked with. “Their perspective of dealing with the issues of identity and history was paramount to them.”

According to the paper “Manifestation of Traditional African Cultural Performances in African Films” by Delphine Cosmas Njewel, African filmmakers have symbolised the cultural struggle in Africa by researching the African identity and concerned themselves with retying the broken thread of African history and its memory.

Hondo, Ousmane and Cissé also made use of symbolism addressing identity in their films, an aspect he feels current local films are lacking. “Look at a South African film. There are symbolisms. Which symbols help us understand who we are? We just put things on the screen without any sense of what is the symbols or metaphors. Philosophy is what’s missing,” he says.

Long way to go
In an interview with Dr Alan Taylor, Suleman said: “There is this false perception from South African directors who assume that making the dumbest uncreative crime movie is a key to Hollywood recognition. It’s sadly unfortunate.” His dissatisfaction with the action genre should not be mistaken for a dislike of the genre. He would just like to see local action-packed movies beefed up with meaning.

The local audience according to him is not challenged or questioned enough by local filmmakers; but it knows what quality and a “R15-million film looks like”.

Through his spectacles, the South African film industry has a long way to go before it can become an enterprise. Countries such as England and France already have a middle-class that consumes culture.

According to Suleman, South Africa’s middle class would rather spend their earnings on luxurious cars and fast food, than on theatre productions.

In order to build a middle-class that will be willing to spend R40 on a movie ticket, the government needs to introduce high school learners to local films and filmmakers, as a way of cultivating a culture consuming generation. “This will create an interest in young people. They’ll want to go see the latest film by a local director they know.”