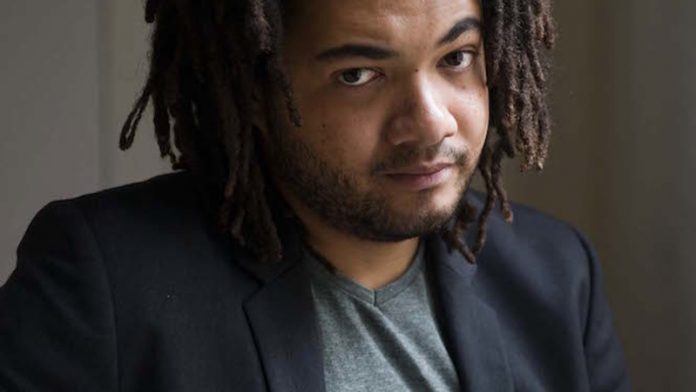 The Vortex Jazz Club is packed. In fact, it’s a sold-out Thursday night and people are sardined in the first-floor venue – sitting around low tables, standing at the back, half-seated on the window sill or leaning against the wall.

We’re barely in but anxiously wait for the show to begin. Just after starting time, the band arrives and squeezes through the crowd, bringing the heckling and laughter down as the five musicians take their places.

South African pianist Bokani Dyer breaks the silence as he leads the band with Meditation Suite from his sophomore album Emancipate the Story. Drummer Shane Forbes and bassist Neil Charles trickle in, to later be followed by Chris Williams on alto saxophone and Soweto Kinch on tenor. There is harmony.

This is the first day of the EFG London Jazz Festival (LJF), an annual event that has been held for the past 22 years.

Unlike traditional jazz festivals that take place in one venue or area, the LJF happens all over London – from Brixton to the Barbican Centre – as it showcases jazz, film and panel discussions and more. This makes it quite costly and, at times, inaccessible. But there are free events that take place during the 10-day festival.

As the Cape Town-based, Botswana-born Dyer strides between older and new, unreleased songs, opening the festival is quite a feat for the young musician.

“When I was putting together the set list of the show, I felt that I needed to present myself musically. So I’m playing stuff that spans from the very beginning. From my first album to stuff I haven’t recorded yet,” Dyer says, while sitting alongside British rapping saxophonist Kinch at the restaurant below, hours before the show.

The two run me through what to expect. Kinch tries to decide between buying jerk chicken from the vendors outside or ordering a burger from Vortex’s restaurant. His choice of food serves as a metaphor for the gentrified area of Dalston Kingsland, where we find ourselves, with its traditional Afro-Caribbean cuisine and commercial burger and pizza-slice joints.

Intuitive music
“Tonight’s going to be an eclectic dynamic meeting of different artists and voices,” Kinch jokes at first, then catches a serious tone to talk about working with the Standard Bank Young Artist of the Year award-winner for jazz.

“Bokani’s music feels so intuitive to play and the musicians he’s selected are quite open. So the good thing about us being fresh to the music is that we don’t have too many preconceived notions of how the music should sound.”

The two have been playing together since 2011. “The first time was in Grahamstown when I won the young artist award and I had a meeting with [Standard Bank Jazz Festival programme director] Alan Webster and he asked me who I’d like to work with … I mentioned Soweto,” says Dyer.

As they remember their years of playing in each other’s bands and talk about wanting to, one day, record an album together, the brotherhood and understanding between Dyer and Kinch is felt. It is apparent even as they play with the other musicians. Each musician bringing their repertoire to the Dyer-composed tracks.

With its name and sound, the second song of the night – an undulating unreleased song titled Vuvuzela – plays out like a precursor to a South African-focused weekend at the LJF.

These events at LJF form part of the SA-UK Seasons 2014/15, an initiative between the British Council and the South African departments of arts and culture, with the aim to showcase local musicianship at the LJF.

“It’s easy for people to have this perception of jazz as an American art form, but there’s been this strong lineage between South Africa and the UK for a good 40 years,” Kinch says, referencing musicians like late pianist Bheki Mseleku and the Blue Notes band, both of whom feature in various tributes during the 2014 LJF programme.

Sounds of acclaim
London-based South African flautist Gareth Lockrane tributes a concert to Mseleku, who died in London in 2008 after going into exile during the 1970s.

South African composer and harmonica player Adam Glasser was a guest at the Junior Academy Jazz Course at the Southbank Centre.

Louis Moholo-Moholo, the only surviving member of the Blue Notes, sat on a panel commemorating the band’s legacy and led a 24-piece Dedication Orchestra in a packed Queen Elizabeth Hall. Later in the day, Dyer paid a tribute to, the Blue Notes in a performance alongside UK saxophonist Shabaka Hutchings, Kinch, trumpeter Percy Pursglove, drummer Mark Sanders and Karim Rasheed-Abel.

“I once heard a radio documentary [on the show of Bush Radio presenter] Nigel Vermaas about the Blue Notes and when they came to London … they made quite an impact on the scene here,” says Dyer.

Kinch adds: “In terms of lineage, music like [band leader] Chris McGregor’s Brotherhood of Breath band inspired [UK saxophonists] Courtney Pine and Steve Williamson, and I’m receiving the baton from those elders. Think of Mseleku’s first album, Celebration, and the people he recorded with. That’s the first time I heard Courtney and Steve Williamson.”

An esteemed SA legacy
On the panel discussion titled “South Africa 20 years on and the legacy of the Blue Notes”, academic and saxophonist Jonathan Eato waxes lyrical about the impact the legendary South African outfit had on London when band members Moholo-Moholo, pianist and leader McGregor, bassists Harry Miller and Johnny Dyani, Mongezi Feza on trumpet and Dudu Pukwana on the sax travelled there.

“Blue Notes pitched up in the UK in 1964 and changed the face of jazz.”

In a 2001 piece on Moholo-Moholo and the over 20-year-old Dedication Orchestra, John Fordham writes how the racially-mixed band attracted young British musicians from the mid-1960s onwards, quoting founding member and drummer of UK band Soft Machine Robert Wyatt.

The Blue Notes “filled a vacuum of meaning in music for me after [John] Coltrane died in 1967. They had that accessible soulfulness you associate with black popular music, but with the edge of something new being made”.

“The last American I had heard doing that was Charles Mingus, so I was overwhelmed with gratitude that they had come along,” Wyatt said.

“The other thing that got to me was that music was clearly not a side issue for them – they clung to it for survival.”

More than 50 years later, ahead of the concert where he leads the Dedication Orchestra, Moholo-Moholo effuses that the band “left South Africa to reserve the music” and to escape the apartheid government that wanted musicians to work on potato farms, not create music.

But the Blue Notes weren’t the only music acts who escaped living beneath an oppressive regime. Trumpeter Claude Deppa – who also features on the LJF line-up – moved to London in 1970s, and has stayed there. More famously, musicians like Miriam Makeba, Letta Mbulu and Hugh Masekela were among a large entourage of South Africans in exile who protested against the apartheid regime.

Struggle notes still ring
Back at the Vortex, Vuvuzela comes to an end after its whirlwind through sounds bleeding gospel melodies, Latin blends and traditional township rhythms. Dyer jokingly quips that the mic hitting the piano strings while he was playing “made it sound like an early Dollar Brand recording”.

As the SA-UK Seasons and the LJF shine a ­spotlight on the 20th anniversary of democracy in South Africa, I ask Kinch and Dyer if protest in contemporary music is as prevalent in the jazz scene as it was when Abdullah Ibrahim recorded the unofficial Struggle anthem, Mannenberg, or Masekela and Makeba lamented the 1976 riots in their song Soweto Blues.

“Protest music is still relevant and potent. It’s more about the connection people make to what lies behind the music instead of the obvious in music,” says Kinch.

Dyer questions how I phrase the start of my question: “We’re celebrating 20 years of democracy …” He interjects: “Are we really celebrating? Did you see what ­happened in Parliament two days ago? It’s in shambles.” He was referring to last week’s clashes in the National Assembly.

Phrased differently, I pose the same question to Ibrahim, who is celebrating his 80th birthday with a celebration at the Royal Hall later that evening. “Jazz was always political,” he says at a small press conference in his dress room in the Southbank Centre. “And music is a means of communication with people.”

At the jazz festival opening on Thursday, Dyer’s music talks to the Vortex crowd and they intermittently respond with “ah!”, “yeah!” and rounds of applause.

He eventually leads the band to a monumental climax with his unreleased song Waiting, Falling, saturated with moving solos and improvisations, the performance invokes Ibrahim’s words at the press conference: “Improvisation gives you this courage to be fearless … it’s scary. But if you equip yourself, you will get there.”

Stefanie Jason’s London trip was sponsored by the SA-UK Seasons.

Bheki Mseleku: ‘He could play anything in any key’