Embrace the things we share in this scary, polarised world 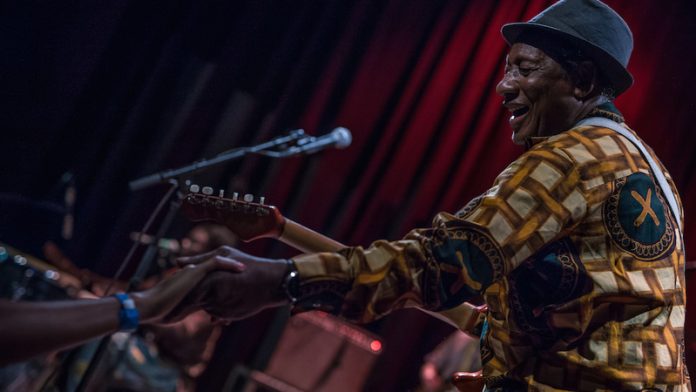 In July 2011, right-wing extremist Anders Behring Breivik detonated a bomb made from a mixture of fertiliser and fuel oil in front of a government building in central Oslo, Norway.

The explosion killed eight people and injured hundreds of others. After the blast, Breivik, dressed in a home-made police uniform, took a ferry to the nearby island of Utøya and killed 69 people, mostly teenagers, in a shooting spree before he was apprehended by an elite task force and taken into custody.

The day after I arrived in Norway on an invite to attend the Oslo World Music Festival, I went for a run through the central parts of the city. It’s autumn there at this time of year – September through to November – and the leaves on the indigenous maple trees change into a sublime, luminous yellow.

I jogged past the government building where Breivik’s bomb had exploded. Staring at the disused office block, in the grey light of the early morning, I remembered the epigraph from Michel de Certeau to Ivan Vladisavic’s Portrait with Keys: “Haunted places are the only ones people can live in.”

This was my first visit to Europe and I was unsure what to expect. Most of what had piqued my interest in the news was the financial crisis and the rise of the far right. Still, anyone who follows current affairs, even cursorily, knows that these are uneasy times. And not just in Europe. From the streets of Libya to the United States, the world is in crisis everywhere you look.

Musical icon
The theme for this year’s festival was “The soundtrack of a nation” – a nod to the role music has played in historical and contemporary struggles for freedom, with a line-up of artists from all over – South Africa, Iraq, Algeria, Ghana, Lebanon, Mali, Nigeria and elsewhere.

Hugh Masekela, one of the musical icons of South Africa’s anti-apartheid struggle, was the headline act. Freedom is the heartbeat of jazz, in both content and form, and Bra Hugh reminded everyone of this when he opened the festival on a bitterly cold night.

Despite his age, the legendary 75-year-old trumpeter and flugelhorn player is still a showman par excellence. Backed up by a quintet of poised, brilliant musicians – most notably Cape Town-born guitarist Cameron John Ward – Bra Hugh effortlessly ran through a selection of compositions from his extensive catalogue – Stimela, Chileshe, Thanayi, Lady and others. And before bringing the curtain down, he invited Norwegian jazz luminaries Ole Edvard Antonsen and Mathias Eick on stage for a performance of his 1968 Billboard hit, Grazing in the Grass.

Deep truth
Sometimes random events have a way of speaking to each other. A funny thing happened when I returned to my hotel room after the morning run. I turned on the television and there was a BBC report on immigrants sailing to Europe from the Libyan coast. Migration charities believe that as many as 20 000 people may have perished at sea trying to reach Europe in the past two decades.

The BBC report carried a strong anti-immigrant sentiment; there was no mistaking that. For instance, it said the United Kingdom would not be spending any of its fiscal reserves supporting search and rescue operations because – and I’m paraphrasing here – it might encourage more people to make the journey. The alternative, left unsaid, is that they should be left to drown at sea.

In between songs, Bra Hugh had filled the silence of the sold-out auditorium with his philosophical musings on the importance of valuing each other as human beings. It all sounds a little Kumbaya and naïve, but it doesn’t make the message any less meaningful. In fact, in its simplicity it expresses a deep truth about how individuals and societies can live an ethical life.

Transcendence
The day after the opening night was billed as a festival within a festival – “Beirut and Beyond” – showcasing music and artists from the Middle East. These are uneasy times in the region. The Islamic State is carving up the map of the region and redrawing the boundaries and US drones fly overhead everywhere. The net result of all this and more has been death, destruction and suffering of the worst possible kind.

“The soundtrack of a nation” may have been the theme for this year’s Oslo World Music Festival, but a different one began to suggest itself organically on this night – transcendence. A collective yearning for a more compassionate politics in the midst of a contrary, confused and troubled world.

Alif Ensemble, a musical collective with members from Syria, Lebanon, Egypt, Palestine and Iraq, embody this idea. Fusing traditional instruments (oud and buzuq) and harmonies from the Arab world with contemporary influences, their music sidesteps any kind of reductive genre pigeonholing and it oozes with soul and intellect.

Alif Ensemble sings about many things. They sing about war but also about the ordinary aspects of life – relationships gone sour, desire, insomnia and all that other stuff. And I guess there is something revolutionary in this embrace of the totality of human experience.

Lost faith
The next day I played truant and went searching for art of a different kind. I visited a bookstore in the city and left downcast. Among piles and piles of books, the “Africa section”, barely filling up a single shelf, only seemed to contain books on war, poverty and Somali pirates.

It was still early and the sun was shining for the first time since I had arrived. So instead of returning to the hotel room I made my way to the Edvard Munch museum. Once inside, I sat through a rather bleak biographical film on the painter.

Born in 1863, Munch’s mother died from tuberculosis when he was still a boy. There was history of mental illness in the family and, in later life, Munch struggled with addiction. He filtered all of this and more into his paintings, most remarkably in his most famous work, The Scream. But the one fact I found staggering and was unsure of what to make of it is that Munch lost faith in humankind and became a recluse, foregoing any kind of human contact for years. In the end he died alone, surrounded by his paintings.

The following evening I went to a performance by the Ghanaian highlife legend, Ebo Taylor. Like Bra Hugh, the veteran guitarist and bandleader is in his late 70s but shows scant signs of slowing down; though he did have to sit down on one or two occasions to catch his breath. Still, the band’s generous blend of jazzy horns, guitars and rhythm instruments kept the party going well beyond the allotted time.

Quest for healing
The Brother Moves On, the Johannesburg-based collective, brought an end to that night’s proceedings with a soulful performance. Thematically and sonically, their music is as much academic as it is soul, combining insightful social commentary and folk narratives with a hybrid of musical influences and ideas that speak to where they’re at and where they’re from.

Even if you don’t understand the lyrics, the music, imbibed as it is with a quest for healing, takes you places. It’s like a religious experience.

It was drizzling on the morning of my departure and I went for another run through the central parts of the city.

Again, I jogged past the government building where Breivik’s bomb had exploded – the hotel I was staying at was about 100m away.

Looking at the building in the light rain, it struck me that the festival and Brievik’s bomb are a response to the same phenomena: a rapidly globalising world in which all kinds of borders are collapsing. Breivik responded with a bomb and a 1 518-page white supremacist manifesto; the Oslo World Music Festival was about embracing the things we share.

Slowly, Norway reclaims the land where it lost its innocence

Complicit in a tide of hate and violence

Ubuntu lifted Norway, so why not South Africa?