Selma: a reminder that 50 years on, #blacklivesmatter 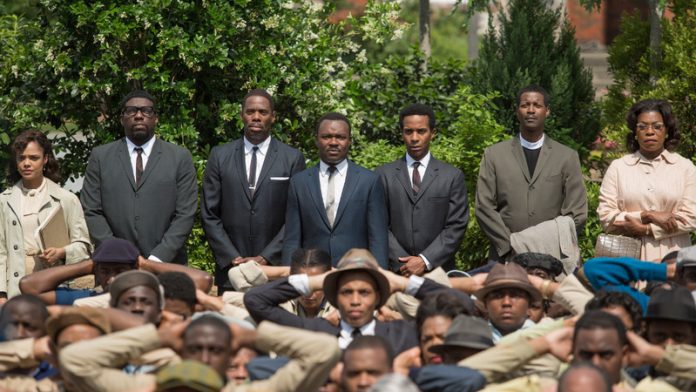 The hashtag #blacklivesmatter was voted 2014’s word of the year in the United States by linguistic experts from the American Dialect Society. The hashtag was a campaign and rallying cry for protests in response to the deaths of two African-American men, Michael Brown in Ferguson and Eric Garner in Staten Island, at the hands of police officers. The social movement has morphed into a project that hosts a national conversation around police and vigilante violence.

The timing of the Oscar-nominated film Selma, based on the 1965 marches from Selma to Montgomery to demand voting rights for African-Americans in the South, highlights this present-day social movement that is, unbelievably, still necessary half a century later.

Human rights issue
“#BlackLivesMatter is an ideological and political intervention in a world where black lives are systematically and intentionally targeted for demise,” writes Alicia Garza, founder of #BlackLivesMatter, on the organisation’s website.

“When we say black lives matter, we are talking about the ways in which black people are deprived of our basic human rights and dignity.”

In the first scenes of Selma, Annie Lee Cooper, who is played by the film’s producer, talk show queen Oprah Winfrey, attempts to register to vote in the state of Alabama. But a white official refuses to put her name down on the voters’ roll because she is not white, despite having all the required documents.

Civil rights leader Martin Luther King Jr had been part of numerous protests against racial discrimination in the US. However, Selma zooms in on one particular protest and movement in Selma, led by King and fellow activists James Bevel, Hosea Williams and John Lewis of the Student Nonviolent Co-ordinating Committee.

That black lives matter is central to Selma’s narrative. Arguing that the right to vote is a basic human right. (Supplied)

The march eventually resulted in the Voting Rights Act of 1965 being passed, prohibiting racial discrimination in voting.

A life not forgotten
That black lives matter is central to Selma’s narrative. Arguing that the right to vote is a basic human right, the film tackles the movement that resulted in three protest marches from Selma to the Alabama state capital of Montgomery.

The protests were organised as a plea for black American citizens to be granted the right to vote – which, despite the existence of the Civil Rights Act of 1964 that outlawed discrimination based on race, colour, religion, sex or national origin, was still a point of contention.

Jimmie Lee Jackson was a 26-year-old activist who was shot by an Alabama state trooper in 1965 as he tried to protect his mother from being beaten in a café where they had taken refuge from attacks. His character is portrayed honestly and beautifully by 23-year-old Keith Stanfield.

The scene depicting Jackson’s death in the film is a tear-jerker, drawing a painful comparison between the ruthless behaviour of the state troopers in the 1960s South and the present-day deaths of Brown and Garner at the hands of police.

Art with an edge of topicality
Selma director Ava DuVernay told the Independent in the United Kingdom: “It’s an honour to have a piece of art that meets this cultural moment in this way and kind of aligns so beautifully to illuminate truths, questions and ideas about how to move forward.”

Selma runs for two hours and seven minutes. Its director and writers stuck to telling the story and stayed clear of romanticising the events, which is commendable. So don’t expect to see love or sex scenes – the usual Hollywood blockbuster recipe – or any other storylines that divert from the main narrative.

Although snubbed for a best actor Oscar nomination, David Oyelowo delivers a solid and convincing portrayal of King. Oyelowo has also appeared in films such as The Butler and Rise of the Planet of the Apes.

You’re not sure what to expect when he appears for the first time in the film, but when he takes to the pulpit to deliver a speech he immediately commands attention and fits comfortably into the legend’s shoes.

Legendary shoes to fill
Oyelowo’s challenges in playing King were both physical and emotional.

“There was the weight gain; there was trying to look like him as much as I could,” he said. “But the actual really tough thing was the spiritual work that had to take place. When he’s giving those speeches, he was taken up with something beyond himself – and to try and put myself in that headspace was the biggest challenge,” he said at the UK premiere of Selma, at London’s Curzon Mayfair cinema.

Selma illuminates truths, questions and ideas about how the condition of blackness in history and in society can move forward. (Youtube)

Not only do audiences get to see King the visionary, the activist, the pastor and the leader, but Selma peeps into King’s fractious relationship with his wife, fellow civil rights activist Coretta Scott King, played by Carmen Ejogo.

King’s marriage takes strain in the film and we are shown how he tries to devote his time both to the movement and to his family.

Oyelowo reveals a vulnerable side to King, contrasting with the public face of the global icon known for his fiery public addresses such as the “I’ve been to the mountaintop” speech, delivered a day before his death.

“We see him [King] as a strategist as well as a moralist, a man who is constantly calculating both what is possible and what is necessary and not always succeeding,” the Guardian writes.

Diversity matters
In 1965 the Selma marches raised awareness around equality, but in 2015 we see Selma reminding the entertainment industry that diversity matters at awards shows such as the Oscars.

Selma is nominated for Academy Awards for best picture and best original song, but the acting nominees are all white and there are no women ­nominated in the directing and writing categories. The hashtag #OscarsSoWhite trended on Twitter after the nominees were announced.

“I knew I wasn’t going to be ­nominated. But I was hoping for a nomination for David because he did extraordinary work,” DuVernay told the Independent.