US ‘holds key’ to peace in Colombia 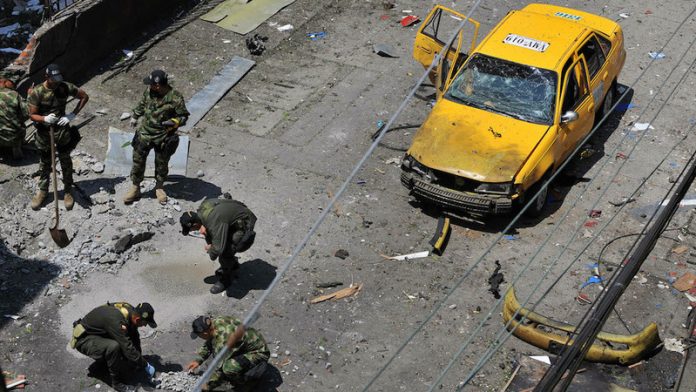 When Washington appointed a special envoy to peace talks between the Colombian government and the left-wing rebels of the Revolutionary Armed Forces of Colombia (Farc), it was billed as a show of support for the process and for President Juan Manuel Santos.

There is no love lost between Farc and the United States: Washington put the guerrilla group on its list of terrorist organisations in 1997 and poured billions of dollars of military aid into a campaign to defeat it.

The rebels accuse the US of imperialist meddling and consider Americans among their most prized hostages. But according to several sources close to the peace talks, the presence of a high-ranking US envoy may actually be the key to ending nearly five decades of civil war in Colombia.

Following repeated requests from Santos, President Barack Obama appointed veteran diplomat Bernard Aronson to accompany the peace talks in Havana, which began in 2012. “The US realised the process is on its last and most difficult leg,” said Sergio Jaramillo, Colombia’s peace commissioner and a member of the government negotiating team. “We were reaching the time for critical decisions.”

And many of those decisions, according to several sources, hinge on the US, including whether Farc members will face extradition to a US supermax prison and the security of former rebel fighters in a post-conflict Colombia.

Aronson does not participate directly in the negotiations, but has been to Havana on three occasions, meeting separately with the government and rebel sides. His open presence at the talks was made possible by the thaw in relations between Cuba and the US, that resulted in travel and business restrictions being after more than 50 years.

Not a mediator nor a neutral figure
Aronson, who participated in peace talks to end civil wars in El Salvador and Nicaragua in the 1990s, underscores that he is not a go-between. “The United States is not playing the classic role as mediator, nor is it a neutral figure,” he said. His role, in part, is to help the government reach a deal with the rebels by explaining US policy to Farc.

Farc wanted to have a conversation with the US on a number of issues, said Aronson. That request might have seemed unexpected: US officials describe rebel fighters as “narco-terrorists”, accusing them of crimes including drug trafficking, kidnapping and murder. Covert aid from the CIA and National Security Agency has reportedly helped Colombian government forces kill dozens of rebel leaders.

But Farc welcomed Aronson’s appointment, saying that a US voice in the process is “a necessity, given the permanent presence and incidence that the United States has had in the political, economic and social life of Colombia”.

Rebel commanders are seeking assurances from Washington that if they sign a peace deal with the Colombian government, the US will not be an obstacle to implementing agreements reached at the table.

Farc and the government have agreed on three of five negotiating points, including fighting the drug trade. But Farc needs US input on the thornier subjects now on the table, such as what sort of punishment – if any – the group will have to pay for its crimes.

A life-sized cardboard cut-out that accompanies the Farc negotiation team in Havana is a symbol of their worst fears: it shows an image of rebel commander Simón Trinidad, who was captured in 2004 and extradited to the US, where he was convicted on terrorism charges. Trinidad is serving a 60-year sentence in a maximum-security prison in Colorado.

At least 60 other living Farc members – including the top tier of the negotiating team in Havana – have been indicted in the US on charges ranging from drug trafficking to the kidnapping and killing of US citizens.

Concerns about Farc’s legal status
“The Farc have expressed concerns about their legal status as pertains to the United States,” said a source close to the peace process. Santos is sensitive to that concern. “I don’t believe that any guerrilla is going to turn in his weapon only to go and die in a US jail,” he said.

It is ultimately up to the Colombian president to decide whether to agree to an extradition request, and Santos has already denied the extradition of the brother of Farc leader Fabián Ramírez, a member of the rebels’ negotiating team.

Several US officials have suggested privately that diplomatic relations would not be affected if Colombia chooses to desist from extraditing demobilised guerrillas.

Michael Shifter, president of the Inter-American Dialogue, a Washington think-tank, says the US position on such a sensitive issue is crucial. “For the Farc it’s the one issue that really matters,” he said.

Farc has publicly demanded that Trinidad, one of its top ideologues, be allowed to participate in the peace process in Havana. Though US officials have denied that a pardon or commutation of sentence for the convicted rebel has even been discussed, Jaramillo told the BBC that Trinidad would have to be part of any agreement with Farc.

Aronson said the issue of Trinidad’s future has come up in his encounters with Farc negotiators but that the rebels haven’t dwelled on it and the US is not prepared to discuss it. “It’s an issue, but from our perspective it isn’t on the table,” he said.

Another option would be for Trinidad to serve out his sentence in Colombia or a third country, such as Norway, one of the countries that is accompanying the peace process. Even if they aren’t shipped off to a US prison, Farc worries about the security of its members in Colombia once they give up their guns.

And with good reason. As part of an attempted peace process in the 1980s, Farc created a left-wing party called the Patriotic Union. Those talks soon fell apart, and more than 3 000 members of the party, including two presidential candidates, were murdered by right-wing paramilitaries linked to the armed forces. Many of those who escaped death went into hiding or exile.

Because of the Americans’ long-running ties with the Colombian armed forces, Farc hopes the US will help ensure that this time the military, or its proxies, don’t hunt them down and kill them. – ©?Guardian News & Media 2015

Alan Winde admits he is in a vulnerable group when it comes to contracting the virus, considering he is 55 years old, and a diabetic
Read more
Coronavirus