Nigerian military: Stars on their shoulders, blood on their hands 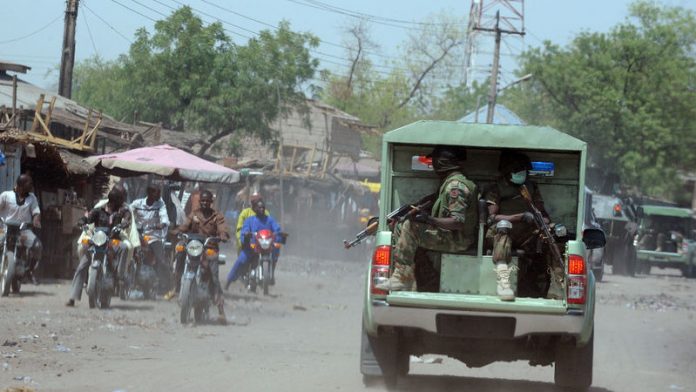 That is the shocking reality of life in north-east Nigeria, where a population terrorised by the brutal armed group Boko Haram is also facing unspeakable violations at the hands of the very military whose duty is to protect them. A place where human rights violations are being committed in the name of “peace” and at the expense of thousands of lives.

Having spent most of my life documenting human rights abuses across Africa, and having been imprisoned for more than two years in an Ethiopian jail because of my work, I’m not easily shaken. But the evidence of war crimes and possible crimes against humanity committed by the Nigerian military that we are revealing in a ground-breaking report today makes for shocking reading.

And evidence that military commanders either ordered the abuses or ignored the overwhelming evidence that they were taking place, just adds insult to injury.

The figures are terrifying enough by themselves. But they tell only half of the story. The tales of those who survived these horrors – and of the relatives of those who didn’t make it out of the military detention centres alive – are nothing short of scandalous.

‘Welcome to your place of death’

Thousands of young men were rounded up in towns across the north-east, often “outed” as Boko Haram members by the arbitrary point of a finger. The military detention centres where they were taken to resembled death houses where thousands perished of starvation, thirst, preventable diseases or the spraying of dangerous chemicals in poorly ventilated cells. Hundreds of desperate family members traipsed around detention centres, prisons and mortuaries in the tragic hope of finding their relatives. Often not even allowed to make inquiries and almost never receiving any official confirmation of the fate of their loved ones.

One of the survivors is 26-year-old Ahmed Maima (not his real name). He was arrested on May 2 2013 in Gwange, Maiduguri, Borno state, along with another 121 local men.

“All of you are Boko Haram,” the soldiers told them.

Ahmed and the others were taken to the now infamous Giwa barracks in Maiduguri, where the conditions were so bad and torture was so rampant that thousands never made it out alive.

Soldiers there would cruelly greet the incoming inmates: “welcome to our die house, welcome to your place of death”.

The father of two spent four months in detention, until his relatives managed to secure his release by paying a bribe. Out of 122 men initially arrested alongside him, only 11 survived.

Ahmed was interrogated only once, when he had to state the date and location of his arrest. He said that throughout his detention he and others were held chained in pairs, with up to 400 people crammed into a cell of approximately 8m by 8m.

“They started to die after three days [in detention], more died after one week. In the morning you go and collect small food, breakfast, they open the cell, have breakfast of rice, a small amount, they put it in one hand. Later in the day they give you water once. It is in a jug and you drink and pass it to another inside the cell. In the evening it is rice and stew, small. There is no washing, no showers. No sleep. You just sit down only, the place is very tight, just sit on your bottom.”

Conditions were so extreme, thousands didn’t survive. When a prisoner died, the military would make their cellmates load their bodies into sanitation trucks before they were taken out of the barracks.

It is undeniable that Nigeria’s armed forces face a massive challenge in stopping Boko Haram– with thousands killed and brutally abused by the armed group since 2009. However, arbitrarily arresting, killing, starving, suffocating and torturing to death anyone they think may be a member, sympathiser or alleged sponsor of the group will not make anybody safe.

On the contrary, this twisted campaign is grossly backfiring.

Civilians are still in danger from both sides.

So far, the official stance on the abuses has been shameful. We have repeatedly brought our findings and concerns to the attention of Nigerian military and civilian authorities – sometimes in writing, sometimes in face-to-face meetings, calling for an independent and impartial investigation. But hardly anything has been done. No one has been held accountable for the thousands of civilians who have died or disappeared at the hands of the military.

These commanders must be investigated. War crimes and crimes against humanity are among the most serious crimes in the world.

Newly inaugurated President Muhammadu Buhari is seen as the man with a golden opportunity to lead actions to break with the past.

During his inaugural speech, he spoke of the need to “overhaul the rules of engagement to avoid human rights violations in operations [against Boko Haram].”

The hopes for justice and accountability of thousands will depend on whether his government keeps to these promises.

But this is not only Nigeria’s problem. The horrors taking place across the north-east of the country are everybody’s business. World leaders – particularly those in Africa – also have a duty to use their influence on Nigeria to ensure justice for the thousands of victims of human rights violations.

Those responsible for ordering or ignoring reports of abuses must face justice.

The stakes are too high to ignore.