Who’s who in Johannesburg’s zoo 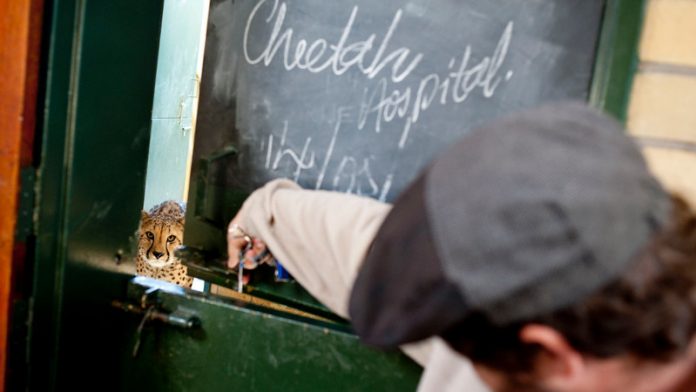 It sounds like a breakfast buffet for a sultan: four apples, four pears, a punnet of strawberries, bananas. These are some of the ingredients on the recipe list for the exotic South American fish at the Johannesburg Zoo.

According to Tshepang Makganye, acting head of the zoo, this diet has been specifically formulated to meet the fish’s nutritional requirements. “A zoo is a technical environment – anything and everything you do needs science,” he says, sitting in his wood-panelled office in the zoo’s admin building. Outside the window, a flamboyance of flamingos plays in a water hole.

When the zoo first opened its doors 110 years ago, its residents consisted of one lion, one leopard, one giraffe, two sable antelope bulls, one baboon, one genet, one pair of rhesus monkeys, one pair of porcupines and one golden eagle. Today, there are more than 2 000 animals and 360 species in the 54-hectare zoo, which costs about R100-million a year to run.

Every morning at 6am, staff in the animal kitchen, a face-brick single-storey building near the Jan Smuts Avenue entrance, prepare meals for the zoo’s inhabitants – peeling vegetables, dividing up bags of pellets, setting aside lucerne or cutting up meat. The zoo’s chefs are some of the 132 employees involved in running the zoo.

“Between 7am and 8am, the keepers from the different sections come and collect the food,” Makganye says. “You need to know how often to feed [different] animals and how much to feed them. Some animals you have to feed three times a day, others – like snakes – you feed once a week.”

Science factor
Science informs the activities of the zoo, from what the animals eat to the habitats designed for them, he says.

The zoo is separated into sections that include the reptile house, the lion enclosure, “Madagascar”, which houses animals native to that island, the “Heart of Africa”, and “Amazonia”, the zoo’s latest installation that includes a faux temple housing South American animals. This section, which opened two years ago, has a price tag of about R21-million.

Aquarist Erica Welgemoed tests the water in the aquariums to ensure its quality is good enough for fish. (Photos: Delwyn Verasamy, M&G)

On the second floor of the temple, a tunnel has been transformed into a fish tank. Exotic South American fish stare down at you from above and flank your sides. Backstage, pumps filter the water and regulate the temperature. On the third floor, a laboratory looms over the tops of the tanks that resemble huge swimming pools.

Erica Welgemoed, one of three aquarists at the zoo, is on duty when we visit. Welgemoed, who trained in Port Elizabeth and worked at the national zoo in Pretoria, says that every day they “test one or other of the tanks for pH, nitrates, nitrites and ammonia”. These chemicals are an indicator of the “health” of the water and the fish’s environment. Charts on the walls instruct the aquarists as to the frequency with which the water must be changed.

Sensitive system
Makganye, who has a background in conservation management, chips in: “The aquarium system is sensitive. If we get it wrong, a number of animals die.”

The animal hospital is another simple red-brick building and permeates that distinctive antiseptic smell characteristic of vets all over the world. Senior veterinarian Francois le Grange says the zoo’s animal mortality rate is not high. “Our animals mainly die of old age. As a general rule, animals become older in captivity [than they would in the wild].”

Young visitors to the zoo are mesmerised as Cornelia Wolmarans handles a ball python ahead of feeding time.

Le Grange, who trained as an exotic animal vet at Onderstepoort in Pretoria, cites the example of a female puma: “She is five years older than she should be [in terms of her lifespan in the wild] and she has developed arthritis. The human guys [in this case, an orthopaedic surgeon who treats people] come in and help us. I think they like that it is something different.”

He says that, in general, the work is “not just about reading [and knowing the science]. A lot of the work is hands-on experience.”

One of the hospital’s jobs is caring for new animals that are in quarantine for a month. The day before the Mail & Guardian visited the zoo, two wild dogs had been brought in.

Endangered species
The African wild dog is an endangered species, with the total population estimated at less than 7 000 adults. The hospital’s two vets and two veterinary nurses are watching the new arrivals’ behaviour closely.

“Behaviour [monitoring] is a big part of what we do. Elephants, for example, are not like humans – they cannot tell you what is wrong.”

It is also sometimes difficult to get blood samples from large animals and “to anaesthetise an elephant is a big job. You need a number of people with experience, so you [rather] monitor them via behaviour,” le Grange says.

Running a zoo is all about science, including inhabitants’ behaviour, says the zoo’s boss, Tshepang Makganye. And it’s a good place for people too.

Conservation and protecting endangered species is an important part of the zoo’s function, Makganye says. “Zoos have evolved – they are not just a facility where you put animals for watching. We do in situ conservation, and have breeding programmes to introduce species back into the wild.”

He cites the wattled crane conservation project, managed by the Johannesburg Zoo in co-operation with the South African Crane Working Group, Ezemvelo KZN Wildlife and the African Association of Zoos and Aquaria. It is estimated that there are fewer than 250 wattled crane left in the wild.

“Wild wattled cranes occasionally lay two eggs but will only raise one chick, abandoning the second egg once the first egg has hatched. Members of the wattled crane conservation project collect and hand-rear the remaining egg. Offspring of the ex situ breeding flock will be released to supplement the wild population,” the zoo says.

Education
Another important function is education. “[Many] previously disadvantaged children can’t go to the Kruger National Park to see the big five,” Makganye says. The Masibambisane project, run by the zoo and the City of Johannesburg, gives these children free entrance to the zoo and, in some instances, provides buses to transport pupils to and from the facility.

But the Johannesburg Zoo has not been without its problems. Last October, its accreditation with the World Association of Zoos and Aquariums was revoked and its membership of the Pan-African Association of Zoos and Aquaria was suspended for a year. At issue were eight sitatunga antelope, apparently donated from the Prague Zoo to the Johannesburg Zoo. The outcome of an investigation found that the buck, which had to be euthanised on arrival, had not actually been destined for the zoo, but for a private buyer.

Makganye, who has been in the position of acting head since April this year – he was previously the conservation manager – said that, following the independent forensic audit, one person had resigned and internal disciplinary processes were underway regarding others who were found to be complicit.

“We are in the process of getting re-accredited,” he says.

Despite these concerns, people continue to flock to the zoo. From about 220 000 visitors in 2009-2010, more than half a million are now passing the zoo’s doors every year.

“This is a friendly, safe, healthy environment for the people of Johannesburg, and even the North-West and Limpopo,” says Makganye. “It’s a family-orientated business and contributes to the city’s goal of healthy living.”

Ban on sending wild elephants to zoos a step closer

NSPCA to take action against Joburg zoo over elephant