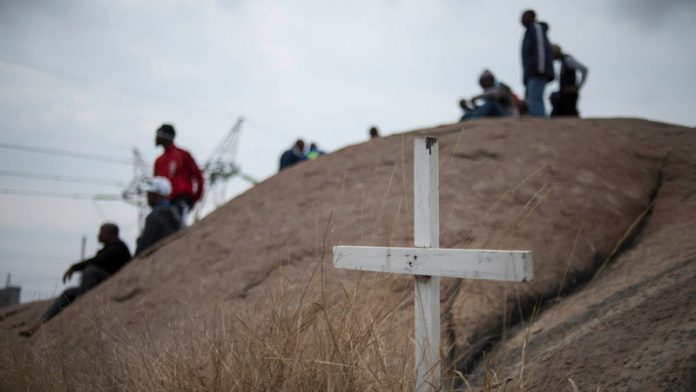 Two days after the Marikana massacre, Julius Malema, without a political home since the formal end of his disciplinary proceedings in April 2012, pounced on the grieving and defiant striking Marikana miners before a prevaricating Jacob Zuma did.
Appropriating the massacre, Malema told the mineworkers that they had no president and that “many people will die as we struggle for economic freedom”.

Dali Mpofu submits email evidence linking Cyril Ramaphosa to the Marikana massacre.
October 23 2012
A month into the commission, legal counsel for the arrested and injured mineworkers, Dali Mpofu, submitted evidence of email exchanges involving Lonmin non-executive director Cyril Ramaphosa. Ramaphosa, in emails to Lonmin executive Albert Jamieson, described the strikers’ actions as “dastardly criminal” and requiring “concomitant action” to solve. In further emails to Lonmin executives, Ramaphosa revealed how he would call on senior government officials to intervene on behalf of his company. Long before Mpofu argued that Ramaphosa should be charged with murder, the revelation of the emails cast Ramaphosa, at least in the eyes of the mineworkers and those sympathetic to their cause, as Marikana’s number one instigator.

Miners Shot Down is released.
February 14 2014
Filmmaker Rehad Desai’s documentary on the days leading up to the Marikana massacre drove the point of the mineworker’s ambushing in compelling fashion. The film’s climax, detailing the corralling and cold-blooded shooting of the strikers (courtesy of al-Jazeera footage) as they descended the koppie, laid bare the brutality of the event for audiences that had paid only casual attention to the commission.

AIDC calls for Lonmin to be investigated.
September 18 2014
The Alternative Information and Development Centre (AIDC) called for Lonmin to be investigated following the testimony of Lonmin executive Mahomed Ismail Seedat. Seedat had obfuscated Lonmin’s offshore capital transfers to tax havens, claiming for example that the Bermuda-based Western Metals Sales Limited, was shut down in 2008.  Between 2007 and 2012, the company had transferred R1.5-billion in sales commissions from its South African operations to Western Metal Sales and a further R1.4-billion to its own head office in management fees. The AIDC eventually released its report on June 2 2015. The report, according to the AIDC, showed that had Lonmin not been involved in transferring vast sums of money to tax havens, the rock drillers could have had their demand for R12 500 met in 2012.

Zuma still ‘processing’ the report.
May 10 2014
Following mounting pressure to release the report that had been handed to Zuma in March, the presidency released a statement saying the president was still processing the report and would release it publicly in due course. “The Commission has made some serious recommendations that require careful consideration. Therefore, it is important to apply my mind carefully so that our response ensures that the events that took place in Marikana are not allowed to happen again in our country,” the statement read.

Zuma calls the Marikana miners killers who had to be stopped.
June 23 2014
A few days before abruptly announcing he would release the Marikana Commission report, Zuma made public pronouncements at the Tshwane University of Technology suggesting he has already made up his mind about the mineworkers’ culpability. In response to EFF member Napoleon Webster, Zuma said the Marikana workers were murderers and the police had killed them to stop them from killing more people.