Danaë – a goddess gets her due, at last 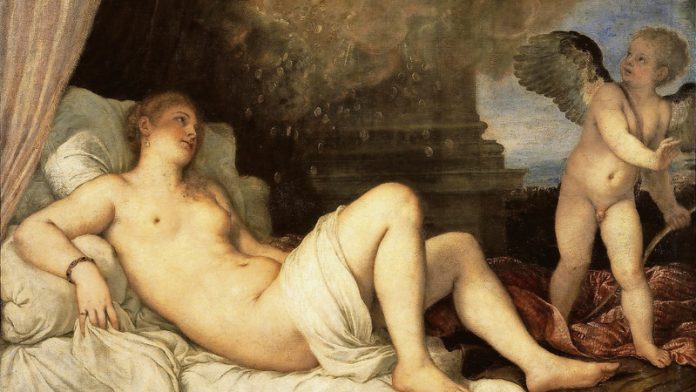 Britain’s sexiest art treasure is the centrepiece of a new exhibition at Apsley House, home of the Duke of Wellington and now in the care of English Heritage. This is a painting about love and money – and it is priceless. But until recently, it lay almost unnoticed among Wellington’s paintings.

He was there to paint a lavish nude for the pleasure of Cardinal Alessandro Farnese, one of the richest men in Italy and someone who didn’t let clerical office restrain his libido. In fact, the model for Titian’s painting has been identified as Farnese’s mistress, Angela, a famous courtesan.

That would make sense, for the painting Titian created is, among other things, a joke about prostitution. It is a picture of Danaë, mother of the Greek mythical hero Perseus, receiving her lover Zeus.

In one of his trademark transformations, Zeus takes the form of a shower of gold. As Danaë reclines on her richly furnished bed, displaying a body that Titian makes both grand and sexy, gold coins fall from above. Is this the money Farnese paid his professional lover?

Britain’s greatest art treasures
Danaë was so famous – even Michelangelo paid a visit to Titian’s studio to see it – that other wealthy art lovers paid Titian to create more versions of it. The first version, the one for Farnese, is in the Museo di Capodimonte, in Naples. Another is in the Prado, in Madrid, and yet another in Vienna’s Kunsthistorisches Museum. Arguably, the most significant of them all is in Apsley House, at 149 Piccadilly, London.

The first mythological picture Titian sent Philip II was a new version of Danaë. This was once thought to be the work in the Prado. But one art historian – Paul Joannides of Cambridge University – suggested it was a later work by Titian, and that the one he sent Philip is in Apsley House. This was dismissed as eccentric.

Then, in 2013, the Prado borrowed the Apsley House painting, cleaned it, analysed and proved it actually is Titian’s original. A painting regarded for the whole of the 20th century as a fake is now considered one of Titian’s key works, and therefore one of Britain’s greatest art treasures.

That’s why Apsley House is one of Britain’s great, if lesser known, art museums. Wellington’s stash included The Water Seller of Seville, by Velázquez, and now Danaë, the most glamorous of old master paintings.

If looking at naked women is not your thing, you may prefer Canova’s colossal nude statue of Napoleon in the Apsley stairwell. Wellington knew his art. He also knew his enemy – in explicit detail. – © Guardian News & Media 2015

One Movie, Two Takes: The Man from Toronto