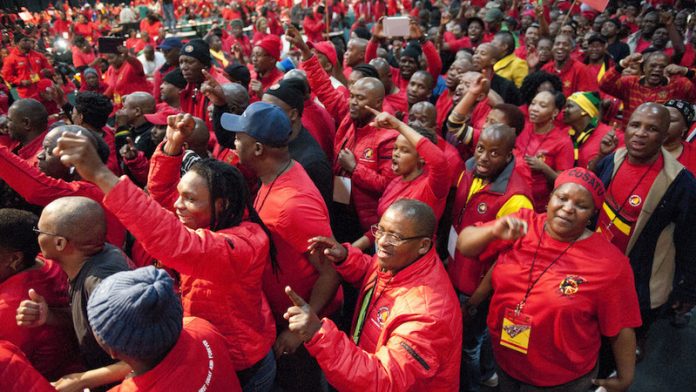 If there was any doubt, this week’s acrimonious special congress of labour federation Cosatu has made it clear that it will split very soon and that no amount of intervention by the ruling ANC will help to avoid this.

The heated and protracted dispute about credentials was symptomatic of the malaise afflicting Cosatu. But you will not find an understanding of the origins of this crisis of unparalleled internecine hostility and rivalry in the combustible heat generated by developments since its largest affiliate, the National Union of Metalworkers of South Africa (Numsa), was expelled last year, followed by its general secretary, Zwelinzima Vavi, earlier this year.

No, we need to start with the tripartite alliance between the ANC, Cosatu and the South African Communist Party (SACP) after the 1994 elections. As has been made indisputably evident since then, Cosatu has not been much more than convenient electoral fodder for the ANC for 21 years, which is a long time given the huge expectations of Cosatu members had in 1994.

This criticism is especially relevant because the black working class, especially organised labour, was regarded as the “motive force of the National Democratic Revolution”. This led to legitimate expectations that black labour would be the biggest beneficiary after 1994.

Nobody has shown more clearly than Vavi how the conditions facing Cosatu members and the broader working class steadily deteriorated over the years, despite being a part of the ruling alliance, especially as a result of economic policies that had adverse consequences.

Though more favourable labour laws benefitted Cosatu, wages and working conditions have been under sustained attack, especially since the onset of the global economic crisis in 2008. As a result, the triple scourges of unemployment, poverty and inequality have worsened. We have for a while now been the most un-equal society in the world, a most devastating indictment of ANC rule since 1994.

I have written many articles since the 1990s pointing to the inevitability of a split in the ANC alliance only because it could not be sustained by broken promises. It was largely only useful for the ANC in elections and the ANC has been pulling in a fundamentally different direction from Cosatu on key economic policies, which has always been the Achilles heel of the ANC alliance. The unprecedented social crisis we have today can be directly traced to these differences. The lot of the unemployed and unorganised workers is worse.

But there is a massive contradiction at play in the supposedly reconciliatory interventions of the ANC in the crisis tearing Cosatu apart. It is an indisputable fact that Cosatu first became afflicted with factionalist divisions during the second term of former president Thabo Mbeki. This is when the ANC became seriously concerned with the consequences Cosatu’s militancy was having on both the ANC alliance and the ANC government and especially on investments in the country.

ANC leaders began to make approaches to certain Cosatu leaders they thought would be more amenable to their views than others, to leverage greater influence on Cosatu to toe their line. At that time the president of Cosatu was Willie Madisha, who was later expelled. The current Cosatu divisions can be traced back to that period.

It was reported that Madisha was close to Mbeki and Vavi to the current president, Jacob Zuma, whose victory in Polokwane he said was an “unstoppable tsunami”. It is true that Madisha did tend to be closer to Mbeki than was Vavi. Hence, even before Polokwane, factionalist divisions with a distinct political overtone began to take shape in Cosatu. Inside Cosatu you were either with Mbeki or Zuma, with Madisha or Vavi. While such divisions were coalescing around these ANC leaders, the ordinary rank and file sat in silence and hardly knew what was happening.

But the point is that, because the ANC was the leader of the ANC alliance and government, it wielded huge and disproportionate influence on what happened in Cosatu and it expected its consistent support, especially at election time. This inevitably placed Cosatu under enormous conflicting pressures, coming not only from the ANC but also from its other key ally, the SACP, whose leadership was always close to Zuma, especially in his battles with Mbeki prior to Polokwane. Here lie the real roots of a palace politics that inevitably led to the interests of ordinary members being neglected.

Cosatu’s orientation towards ANC alliance politics and the divisions in the ANC itself, especially between Mbeki and Zuma and, at one stage, even between Vavi and Madisha, when they were at war with each other, had a distracting, alienating and debilitating effect on it.

The role of the SACP contributed to the challenges Cosatu faced in the sense that it became even more vocal than the ANC in condemning Numsa and others in Cosatu who were justifiably critical of the ANC and its policies and of the SACP itself. This served to aggravate the already deep tensions and differences in Cosatu and in the ANC alliance, especially since its leaders were appointed to the Cabinet in 2009.

However we look at it, there is little prospect of preventing a split in Cosatu. It is too late I believe, especially as Numsa is now firmly moving along a fundamentally different trajectory. It is leading the formation of the United Front and it is the anchor around which an alternative socialist workers’ party is being projected, in direct opposition to the ruling ANC, a process that is now unstoppable.

However, if the split gives rise to another trade union federation, it might be better for workers, whose member unions will now have to compete seriously for their support rather than to take it for granted, as appears to have been the case thus far.