Naledi is our spirit, not simply old bones 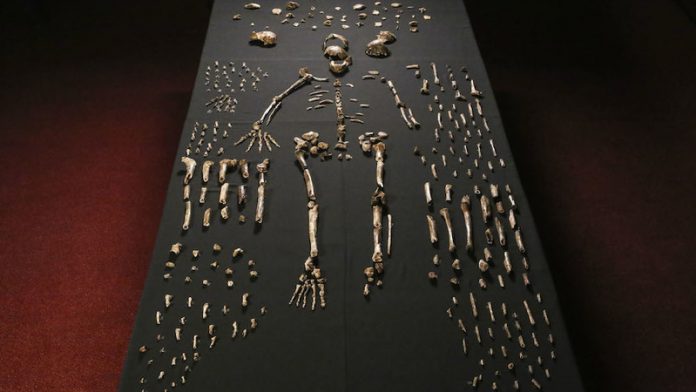 The global fight against patriarchy and the treatment of women as inferior has witnessed the rise of the use of the term humankind instead of mankind, used in earlier times to denote both men and women.

It was during the Enlightenment era of scientific positivism that pseudoscientists appropriated Charles Darwin’s work to justify and perpetuate racism to serve the economic interests of the Empire.

Given the centuries of evil racist exploitation and dehumanisation of African people on the African continent and in the diaspora, we suspect that a scholarly lens of the future will reveal a specific period in our recent history when our use of the term humanity was very much a big part of the liberatory discourses to negate the myths of superiority of the so-called Caucasian races who, through Social Darwinism, sought to justify their conquest of our continent, the enslavement of Africa and the vulgar exploitation of the continent’s wealth.

Knowing all too well that they could not maintain their hegemony and legitimacy through the barrel of the gun or repressive state apparatus, the conniving colonialists sought to control Africans through ideas, committing what decolonial philosophers such as Unisa’s Sabelo Ndlovu-Gatsheni call epistemicide – the killing of African knowledge systems.

At schools, in newspapers, in cinemas, at workplaces – everywhere – African belief systems were distorted and presented as backward, sub-human and outright superstitious.

States sanctioned physical and psychological violence to render Africans as devoid of any humanity, self-worth and dignity. Settlers were on a “civilising mission”, apparently to bring African subjects to the same level of modernity as citizens of the Empire. Being at the bottom of the ladder, the “negroids” were likened to apes and chimpanzees who had not developed fully into reasoning beings like the Caucasian race.

We have a long history in South Africa where there were concerted efforts to alienate Africans from animals through insults that they were monkeys, baboons or donkeys.

Although evidence pointed to the contrary – that Africa was the cradle of humanity and civilisation, that Africans built the pyramids in Egypt, that Africans were not just an oral society, that we had universities long before the Europeans did – white supremacists committed one of the biggest fossil frauds in modern history by “revealing” to the world their Piltdown Man in 1912. This “fossil” was touted as the missing link between human and ape.

Four decades later, scientists, including Professor Phillip Tobias, showed that the Piltdown Man was a hoax – a skull and a jawbone had been glued together to justify the Eurocentric hierarchy of races, with Africans at the bottom of the reasoning ladder. In other words, this hoax was meant to mislead the world and position the West as the apex of human civilisation.

At the height of apartheid, Tobias, the sage of evolutionary science, proved beyond reasonable doubt in a laboratory, and presented in his publication The Meaning of Race, that it was a fallacy that there was anything inferior about the genetic make-up of Africans.

He built on mountains of evidence, which had proven over centuries that race and racism were a social construct justifying the exploitation of people on the basis of darker skin colour and place of origin.

The great Senegalese historian, anthropologist, philosopher and physicist Cheikh Anta Diop, working on Egyptian mummies, demonstrated beyond any measure of doubt that ancient Egyptian civilisation and culture were an authentically black African achievement, and that our continent is the cradle of all humanity. Today, billions spent on the Caucasian superiority project have failed to disprove Diop’s work.

Leap to 2015: a few weeks ago local and international scientists announced to the world the find of Homo naledi at the Cradle of Humankind World Heritage Site in Gauteng. This discovery and the narrative surrounding it is fascinating as it is likely to shake the human family tree. Evolution has always generated debate.

But there are individuals who are not keen on the merit of this science because it is unthinkable or unpalatable that we have evolved from other species, the chimpanzee-like species to be specific.

Mathole Motshekga of the Kara Heritage Institute was among the first to dismiss H naledi. He is insistent that our ancestors did not evolve from baboons or apes. To suggest that, in his view, is to reinforce colonial and racist views about African people. For him, humanity predates the animal kingdom.

A careful study of the conclusions of the researchers suggests that they were saying the opposite – that this hominid, among many others in the past, is another proof that Africa is the birthplace of humanity, of all human beings – and that even whites carry the traits of the African genome, and are not a superior race.

We need to interrogate our assumptions, as the human species, about animals, and why we consider ourselves superior or advanced to them.

The history of humanity reveals that humans are worse predators than animals themselves. For years, we may have been deceiving ourselves that we are smarter and better than animals, when we are merely different from them.

Much of African thought shows that people and animals coexisted in relative peace in times gone by. Many of these animals, including monkeys and baboons, are revered, and some African societies take their totems from animals that they identify with. It is said, for instance, that the name of the Venda sky god and creator, Raluvhimba, is derived from luvhimba, meaning eagle, or the bird that soars aloft.

Although there are many things that connect and unite Africans, Africans have never been a homogenous group. Not long ago, when there was a public outcry over horse meat in our butcheries, Cope leader Mosiuoa Lekota reminded the country that this was an insult to him, because horse meat is a delicacy in his Sotho tradition.

Many African societies have a number of stories regarding their origins. There is no single one that is dominant. If indeed oratory is part of the indigenous knowledge systems that we need to preserve, protect and promote, we need to revisit these many stories of origin and, in a transdisciplinary fashion, see to what extent they can enrich the narrative surrounding H naledi rather than dismissing it outright because we think it projects Africans as subhuman, as some have suggested.

Being no experts in this field, we turn to aspects of Bushmen stories as explained in Venus Rising: South African Astronomical Beliefs, Customs and Observations, by PG??Alcock. What has fascinated us in these stories are the hints of how the Bushmen appear to have been at peace with the idea that they may have originated from other living species, like animals.

Even more fascinating is the idea of creatures in their distant past that had both human and animal characteristics. The “evolution” in these stories is not just one of transformation from half-human to full human, but also from animal-people to full animal.

This surely must interest scientists in palaeoanthropology and may offer insights into the suggestion that H naledi appears to have developed a culture or ritual associated with burying the dead, a phenomenon that people like Motshekga should investigate.

There is a body of literature that proves that, before the advent of racism, Europeans admired Africa and Africans for a variety of reasons. When they eventually decided to use pigmentation and physical attributes to justify slavery and colonialism, they created myths that they were superior and looked to science to justify their claims.

Scholars such as Diop, Basil Davidson, Bernard Magubane, Martin Bernal and Molefi Kete Asante have written tomes on related subjects. A closer look at Credo Mutwa’s Indaba, My Children also reveals facts about Africans and the evolution of our culture and identify.

In our collective attempt to refute bigoted claims that Africans are inferior and backward, we must be cautious that we do not behave like those who exploited, degraded and denigrated us by assuming that we are inherently superior or better than animals. At worst, we should avoid religious zealotry, which reduces the history of humanity to few hundred years of biblical Adam and Eve.

Today our knowledge is getting better. The sky will not fall on anyone for believing in what the white scientists have found regarding H naledi. But this scientific advance risks being divisive if it is used to advance the othering of Africans, as has been the case throughout slavery and colonialism.

H naledi is not a holy cow. The findings must be debated, but no one should suggest that any thought about a relationship between animals and humankind is taboo and an insult to Africans, or suggest that H??naledi is proof of the racist theories about Africans.

We can relate to the Bushmen stories of origin and the possibility that there are some in our kinship who may have been obliterated from family and social memory. We must satisfy ourselves that we know enough about this past in our own pursuit to know where our heritage may be in millions of years to come.

Apart from popular memory, today science and technology are powerful tools at our disposal to fill gaps in our incomplete world.

We must remain open to all the possibilities that will still unfold as the story of H??naledi is further investigated in all its manifestations to get beyond the bones and start listening to its spirit, which seeks to be heard.

Sluggish snails prevailed, but Homo erectus may have died out because, honestly, why bother?
Read more
Environment

Ancient DNA changes everything we know about the evolution of elephants

Although it is totally discredited, its pervasive influence still colours perceptions because of its long association with empirical validity
Read more
Education

Storytelling an evolutionary tool of our humanity

"Sharing stories is an evolutionary tool that alters our minds," says the author.
Read more
Sci-tech

Science continues to shift the boundaries of what we think we know and 2016 will be no exception. Sarah Wild highlights the fields to keep an eye on.
Read more
Advertising
Continue to the category
Coronavirus