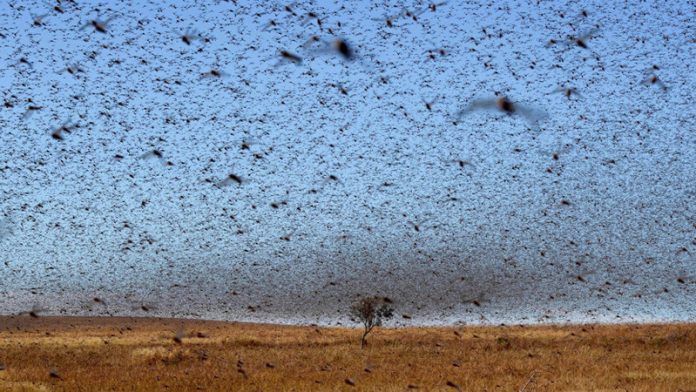 She had never heard of Facebook, so when shocking photos of her emaciated children and grandchildren were posted there, Njomasy could little guess the ripples of anger they would send all the way to the president. The ­family’s plight brought rare ­public attention to the “silent killer” of child malnutrition.

Nearly 1.9-million people in southern Madagascar do not have a secure food supply and 450 000 face severe shortages, according to government and United Nations figures. This ­follows three successive poor ­harvests hit by drought.

One of the worst affected areas is the Ambovombe district, where few places feel as remote, dry, hot and dustblown as the village of Satrie. There Njomasy and her husband, Lahie – they are known by single names only – are among 12 people crammed into a small house.

Their twin sons, three-year-old Fanampesoa and Vorito, and their grandchildren, Rasoa, five, and two-year-old Lovasoa, achieved notoriety in March when ­photos showing them severely malnourished were uploaded to Facebook and went viral. Amid wild rumours that hundreds of children had starved to death, they came to the attention of President Hery Rajaonarimanpianina, who visited the region bearing rice and cash.

“I noticed they were very tired and one was unconscious,” Njomasy told the Guardian during a media visit organised by the the United Nations Children’s Fund (Unicef). “I thought they might die. I took them immediately to the health clinic and they explained it was acute malnutrition.”

The children received Plumpy’nut, a peanut-based paste credited with saving thousands of children in ­similar circumstances.

Rows of cacti cling to the landscape but little else can grow in the sun-baked soil. The family go without breakfast and eat a lunch and dinner that consists of cassava leaves and red cactus fruits.

Njomasy said: “There was no harvest here so there was no food. I always feel hungry and the children do as well. ”

Simeon Nanama, chief of the nutrition section of Unicef in Madagascar, said: “The photos were really shocking. They’re the kind of photos we would have expected from the Horn of Africa crisis way back.”

Nanama has a daunting task in a coup-prone country where nine out of 10 people live on less than $2 a day, according to the 2012-2013 millennium development goal survey, and a quarter of children are out of school and nearly half of rural dwellers practise open defecation.

The former French colony is exposed to cyclones, droughts, floods, locust plagues and the sharp end of climate change, with a long-term uptick in temperature and decline in rainfall.

Almost half of children under five suffer chronic malnutrition, the fourth highest rate in the world, yet less than 0.5% of the national budget is spent on the problem.

Malnutrition not only stunts children’s growth and increases their risk of obesity but can also impede brain development, causing irreversible harm to memory, learning ­ability and IQ.

Stunting reduces school performance, equivalent to two or three lost years of education, and diminishes earning power, Unicef says, while a stunted girl is more likely to give birth to an undernourished baby. But only 12% of malnourished children have access to treatment. Experts warn that raising a damaged generation will have far reaching social and economic consequences.

“Most of the damage happens in the brain,” Nanama said. “[It] is not reversible after two years. This form of malnutrition is affecting half of Madagascar’s children under five.”

In Bevala, a village of 1 580 people in the Anosy region, a child died from hunger earlier this year. Dust blows in eyes and swirls in clouds beyond the cacti. Small houses of concrete or bamboo crouch in the hot sun.

There is no electricity and the nearest water source requires a half-hour round trip on foot. A woman pounds corn in a hollowed out tree trunk.

The modest marketplace sells beans, cassava, corn, peas, rice, spring onions and sweet potatoes. Sevasoa Maho (31), a single mother of seven, who earns R133 a month for weeding at a sisal plantation, said: “The kids cry from hunger. I don’t find anything to eat. I just rush to get them fruit – at least it’s something.”

The children stopped going to school this year because Maho cannot afford the yearly fee of R105 each.

“The kids are not going to learn anything anyway. All they think about is to eat. At school, nothing goes in.”

Edwige Rasoa (52), the community’s nutrition worker, said the food insecurity situation began in January because of the lack of rain and exceptionally strong winds.

“Most people are working in the sisal field but for the past eight months they have not worked and not been paid,” she said. “Those who have money eat cassava or maize for lunch and dinner but now, because of the drought, people are just surviving on cactus fruits.”

At the nearest clinic in Amboasary, a tape measure was wound around the arm of nine-month-old Jimmy Lambo, who was then dropped into a blue sling hanging from a scale on a bare wood frame. The results were worrying.

Medical worker Beatrice Razana-mazava said: “All the parameters have stabilised since last week. It’s not good news because they should have increased … He’s severely malnourished.”

Jimmy was believed to have lost weight because of complications including a respiratory infection. His mother, Julia Vaha (19), whose other son is also receiving treatment for malnutrition, said: “I saw he was ill about a month ago. He was ­getting weaker and his arms were getting thinner. He had bad diarrhoea and vomiting so I was frightened. We don’t have enough to eat at home and I don’t have enough milk.”

The clinic, which is supported by Unicef, has treated 209 malnourished children in the past year, up from 120 the year before, and last year screened more than a million children for acute malnutrition in Madagascar and referred 6 000 cases for treatment.

Yet Madagascar rarely features on anyone’s list of urgent global causes. Its quiet desperation falls into that forgotten category of poor but not-quite poor enough, perpetually hovering just above the red zone that triggers a glut of aid, nongovernmental aid organisations and cameras.

It cannot claim for famine, only severe food insecurity and, as an island of little strategic importance on the world stage, it remains better known for its lemurs.

The government remains fundamentally unstable and financially broke; the economy was ranked the worst on the planet by Forbes magazine in 2011. The outside world is familiar with Madagascar from animated films and nature documentaries but knows little of its population or their poverty.

As the fourth biggest island in the world, it lies 400km off the coast of mainland Africa and does not threaten its borders with refugees.

Elke Wisch, Unicef’s country representative, said: “We have a lot of other countries where, for children, the situation is not good but for some reason those countries get more attention than Madagascar. This is an island. There is no terrorism. There are no geopolitical interests. We are very much off the map. There is a need for an urgent priority list but Madagascar will probably never attract donor aid like Malawi or Tanzania or Uganda.” – © Guardian News & Media 2015

After years of data processing at the Wits laboratory, one evolutionary scientist has constructed a 3D model of a baby Massospondylus
Read more
Advertising
Continue to the category
Coronavirus