The City of Cape Town has settled a legal dispute that would have resulted in the airing of serious allegations in the high court that councillors manipulated council processes to favour a Democratic Alliance donor.

The metropolitan council did so after commissioning a forensic investigation into a whistleblower, costing Cape Town ratepayers thousands of rands.

Haywood’s allegations would have been tested under cross-examination if the city had not settled a fortnight ago.

A group of neighbours objected to the plans and took the city and Carol Strong to court to have the council’s decision set aside. But ensuing events have led to accusations of a council cover-up and attempts to “intimidate and neuter” Haywood.

AmaBhungane has  previously reported that mayor Patricia de Lille ordered the city to defend the matter in court. In February this year she did so – against the advice of a number of senior officials.

Now that the city has withdrawn its court action, Cape Town ratepayers will have to pay the city’s and the neighbours’ legal fees.

The Strongs’ house is one of a number of historical bungalows in the suburb of Bakoven, south of Camps Bay, and as their planned extension went well beyond the area’s strict heritage laws, they applied to the council for permission.

Several neighbours objected that the plans would block their sea views and impinge on the area’s character.

Before deciding on the application, officials and councillors visited the property in May 2014. Haywood later made the stunning claim that, at this meeting, fellow DA councillor Errol Anstey said: “Strong is a big donor for the DA and the application should therefore be approved.”

Dixie Strong “was an old associate of Colin Eglin, who was an MP and … a donor to the Progressive Federal Party” 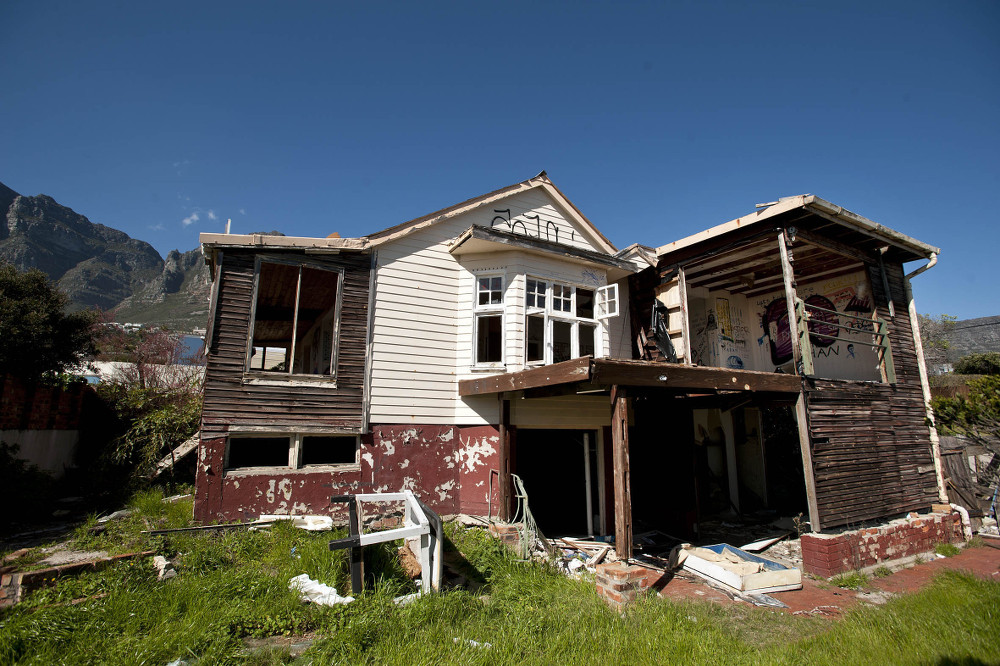 This surfaced in court papers in which McCain’s lawyer, Brian Aronoff, quoted his conversation with her.

Haywood later said the same thing to KPMG, the forensic investigators appointed to investigate her. She told them Anstey made a similar statement a month later at a meeting of DA councillors before the area’s subcouncil 16 was to decide on Strong’s application.

When amaBhungane first reported on the claims in August, Anstey denied making the statement. But he told KPMG that his words to Haywood were that Dixie Strong “was an old associate of Colin Eglin, who was an MP and … a donor to the Progressive Federal Party”.

The late Eglin founded the PFP, a precursor to the DA, which he later represented in Parliament.

Anstey’s version raises serious questions of political bias, which he denies. He told amaBhungane: “It is not unusual, when considering an application, to share information on what is known about an applicant or objector. Since I was not aware of whether or not he is a donor to the DA, I would not have mentioned that when the matter arose.”

In August, a person representing Carol Strong’s interest told ama­Bhungane off the record that Dixie Strong was not a DA donor. But Dixie has since admitted in court papers that he donated R24 500 to the party between 1999 and 2005.

AmaBhungane has heard a recording of subcouncil 16’s meeting on June 1 2015, when it approved the application. Strong’s case was discussed for 10 minutes. Anstey voiced his support for the application, Haywood said nothing and DA subcouncil chairperson Demetri Qually concluded that the application was approved.

“There was definitely an error because it is still a huge issue with my constituents.”

Haywood has since told KPMG that she missed the item in error because the agenda items had not been addressed in order and it had been wrongly labelled.

Later in the meeting, she voiced her confusion, objecting: “This is the item that I was opposed to … This is the one we discussed in caucus … I noted my concerns about this issue this morning [in the DA’s caucus] comprehensively and I had a huge concern about it. But I think there could have been a problem because it says [incorrectly] that the ward councillor is Beverley Schäfer, so I don’t know when this item came up. There was definitely an error because it is still a huge issue with my constituents.”

Qually dismissed her objection and closed the meeting.

Shortly after the meeting, Haywood tabled a motion to rescind and review the decision, as she believed it had been made in error.

Documents before the court show that City of Cape Town legal adviser Susan Mosdell agreed with Haywood. In an official memorandum, Mosdell said: “There is no doubt that the decision is capable of challenge in terms of the provision of the Promotion of Administrative Justice Act.” But she said that, because the decision had been finalised, the city’s only recourse was to apply to the high court for it to be reviewed and set aside. She recommended that this be done.

An email chain in the court file suggests that there was no disagreement with Haywood that the decision needed to be reviewed. For three weeks in August, city officials deliberated in the correspondence only about whether the council could review the decision or whether it needed to be taken to court.

It was eventually agreed that the city would have to apply to the court. The decision about whether to do so was referred to Smit.

But in a letter to Haywood, Mosdell said: “Obviously it is not a process which should be embarked upon lightly as it has reputational and damages implications.”

It appears that Smit stalled because no decision was made for six weeks, and in December the neighbours, led by Mark McCain launched their own high court application for the decision to be reviewed.

AmaBhungane has previously reported that a number of officials then met and decided that the city would not oppose the application, subject to De Lille’s approval. In an email, an official told McCain’s lawyer, Aronoff, that it was unlikely De Lille would oppose it.

Five senior officials signed off on this decision, but the document then languished for a month before De Lille finally signed it, ordering the city to fight the case in court.

She previously defended her action, telling amaBhungane: “It was decided that it was most appropriate to defend the systems of a structure of council.”

Then, eight months after Haywood had tabled a motion to have the decision reviewed, Smit commissioned the KPMG investigation.

In a court affidavit, the DA’s Qually said: “When councillor Haywood’s ‘motion to rescind’ came before the speaker’s office, there was a concern that [she] had transgressed the subcouncil rules and code of conduct.

“As a result, KPMG was appointed to conduct a forensic investigation into her conduct in relation to the application and the motion she attempted to introduce.”

KPMG’s investigation eventually cleared Haywood of this allegation, but found “grounds for disciplinary action against Haywood” because she had reported Anstey’s alleged statements to Aronoff.

But Aronoff complained that it was only after he had demanded that Haywood provide evidence to the court that Smit and other subcouncil 16 councillors “sought to cover up what had actually transpired by inventing the misconduct narrative”.

He said the councillors were “fictitious and vague” when they alleged under oath that there were concerns about Haywood’s conduct.

He said the forensic investigation was commissioned “with the aim of intimidating and neutering Haywood, as she is the only person at the city who was not prepared to hide the truth of what had actually transpired”.

“I need closure so that I can move on.”

Haywood said: “I confirm and have proof that I informed KPMG that I have no objection to making a sworn statement [about Anstey’s comments]. I do not know why I was not required to do so.

“I was also willing to testify under oath in the high court and to be cross-examined in this regard.”

Asked whether she thought Anstey’s comments were acceptable, De Lille said: “We will have to wait for the legal processes to be concluded before we determine which actions, if any, need to be taken.”

Correspondence between Haywood and Smit, which is in the court file, seems to suggest that Smit was considering disciplining her for tarnishing the city’s reputation.

He told amaBhungane: “I do not debate disciplinary investigations of councillors in the media.”

Haywood said: “Because I stood up for what I perceived as a miscarriage of justice, I have suffered occupational, reputational, psychological and financial detriment.

“I need closure so that I can move on.”