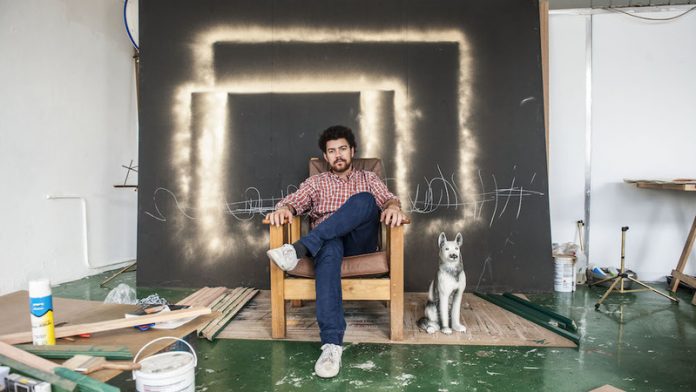 When I was young I overheard a gangster threaten to kill someone who had kicked a stray dog, his logic was that dogs were ancestors. This would mean that the stray dogs in the townships were once black people who lived in those very townships or maybe elsewhere. What a way to live. Live like a dog and be recycled as a dog. If karma does have a dog then the curator of karma definitely has not only a lamentable but sadistic love for black people at large.

Kemang wa Lehulere is tired in more ways than one a day after his opening at the Stevenson Gallery in Braamfontein. The exhaustion of celebrating the opening of his third solo show for the Stevenson, The Knife Eats at Home, is compounded by what he terms “the fatigue of history”, an idea that runs through his work.

The exhibition, coinciding with the 40th anniversary of June 16, is, among other concerns, about the meaning of education. But, as the artist says, he wanted to uncover ways of “speaking differently about ourselves, not just as victims or survivors but as people who lived regardless of this moment”.

In honing this new conversation, Wa Lehulere returns to threads found in previous works of his such as History Will Break Your Heart, which is on show at the Standard Bank Gallery until Saturday, and To Whom It May Concern, his 2015 Stevenson solo show.

Using sculpture, paintings and drawings, Wa Lehulere creates purposeful yet luminously ambiguous work that is simultaneously playful, contemplative, mournful and, yes, horrific. Several installations mark the exhibition on the ground floor, the first of which is a parrot in a wooden box set up at eye level. A voice recording of an American English language tutorial (which the artist found in Bangkok in 2014) plays while the bird presumably “parrots it”.

Wa Lehulere says what we see is a failed attempt to bring a live bird into the gallery. Although the parrot is immobile and the tape drones instructions nonstop, his point is made with cunning intelligence, plugging into the conversation about the national broadcaster’s calls for a 90% quota of local content on all its stations.

“I was reflecting on South Africa, it’s so fucking American,” he says. “If you look at Braamfontein, that [Neighbourgoods] market is quite a Brooklyn thing. People are emulating things, which is not necessarily wrong, but when a culture dominates to the extent that it has been dominating in South Africa, I think that’s very wrong in my opinion.”

Having said that, the artist thinks little of the SABC’s chief operating officer, Hlaudi Motsoeneng, and his autocratic tactics. His point is that the damage has been done and will take a huge effort to undo.

Further into his exhibition, desks (another recurring motif) take the shape of paper planes, suggesting the paradoxical nature of life in a classroom — repressive but with moments of self-created transcendence.

Wa Lehulere translates this duality eloquently by, and his other installations speak back to this theme.

For instance, the exhibition sees the use of tyres with wooden crutches slotted within them — suggesting the way in which children use sticks to roll them along — to convey ideas of horror and playfulness. The tyres, simulating motion, stillness and abandonment, are watched by porcelain dogs, another motif that has appeared in several of the artist’s works, most recently in History Will Break Your Heart.

Dogs occupy an interesting corner of the artist’s imagination. For many South Africans, they convey ideas of repression and access but, Wa Lehulere told those who attended a pre-opening walkabout, for him they signify ideas of escape. According to a legend, the rheum from a dog’s eyes rubbed into a human’s can facilitate astral travel and other intuitive experiences.

An exchange of letters between the artist and a trusted friend and colleague, Khwezi Gule, reveals just how powerful a connective thread the symbol of the dog has become in his oeuvre. Gule explained that Wa Lehulere is interested in ideas of travel (or displacement?), the inner workings of memory and in what he calls “the hidden archive”.

In History, for example, the porcelain dogs’ “hard and brittle” nature, as Gule describes them, speak directly to this idea of lost archives. A video placed at the far end of the exhibition space shows how Wa Lehulere worked with an art restorer and his aunt, Sophia Lehulere, to unveil Gladys Mgudlandlu paintings hidden under seven layers of paint and two layers of plaster in a Gugulethu house she once lived in.

Still on the ground floor of the exhibition, Wa Lehulere uses the symbolism of swings, some with schoolchildren’s shoes on them, some without shoes, and fewer still with shoes lying upturned on them or on their sides beneath them. The shoes, specked with golden “mud” on their soles, evoke many things, not least of which are displacement and untimely death.

As Wa Lehulere explained to a group of wide-eyed art students from the University of the Witwatersrand, he could also be referencing the idea of uncompensated physical labour, the staple of the mining industry.

On the top floor, the dominant installation is one of suitcases shot through with crutches at all angles, overlayed with unravelled balls of coloured wool. Once again porcelain dogs stand guard.

A student described it as her experience of trying to get an education at Wits. Wa Lehulere scratched his ginger beard and listened attentively.

This visceral installation is complemented by framed drawings of column and pillar stumps from classical architecture. Sometimes the pillars emerge from suitcases splayed open, and in others they stand naked with open tomes balancing on them.

But the particularly moving parts are the unexpected ones. There is Green Cloud, a drawing that forms part of a pair, featuring rows of the letter “a”, transcribed in cursive script with a green Koki pen. The rows occupy only a part of the drawing, framed as it is by lines and other doodles. This allusion to the beginnings of a child’s schooling cycle is a particularly resonant moment when considered alongside the exhibition. There are also drawings done in collaboration with his aunt, Sophia; small paper drawings dominated by spheres and lines. These represent Kemang’s personal ruminations on memory and the unspoken.

In the week of Wa Lehulere’s opening, tensions over the Black Modernisms in South Africa exhibition at the Wits Art Museum were still simmering and had perhaps peaked a few days before at a gathering, titled Black Artists White Labels, an open discussion about the overwrought relationships between black artists and academics and the white-controlled institutions they navigate.

Wa Lehulere sat in the front. He has previously lamented the strictures of the gallery and he told the students who had come to hear him talk about his work that he was nobody’s master — three times in an hour. Perhaps he was overcompensating for something, I thought.

Later on, he spoke about how that system can facilitate relationships with clients who are willing to pay handsomely for his work. He has benefited financially and grown artistically from holding both positions. His gallery work reflects these tensions and contradictions but it goes much further.

When each piece is seen as part of a collective whole, Wa Lehulere is not opting out of the conversation but instead is interjecting timeously and signifying lyrically.