Teachers found guilty of sexually assaulting pupils or having relationships with them could be named and shamed in the Government Gazette — if a proposal by the South African Council for Educators (Sace) is given the green light.

Research commissioned by Sace reviewed disciplinary cases reported to it over a five-year period. It found that the most frequent sanction handed down to teachers by provincial education departments was a final written warning “despite the nature of the transgression”.

Parents and pupils should also know that sexual offences and corporal punishment are crimes and should be dealt with by the police and courts, stresses the nonprofit Sonke Gender Justice.

The Employment of Educators Act states that a teacher must be dismissed if found guilty of theft, bribery, fraud or seriously assaulting a learner with the intention to cause grievous bodily harm. Teachers found guilty of committing sexual assault on a pupil or of having a sexual relationship with a pupil at the same school must also be dismissed, in terms of the Act.

The report looked into 1 002 sanctions handed down to teachers after disciplinary hearings were finalised, for the period 2008 to 2012. It revealed that only 55 teachers were dismissed by provincial departments and 99 were struck off the teachers’ roll by Sace. In contrast, 263 teachers got off with a fine and a final written warning.

The issuing of final written warnings was the “leading” sanction meted out to teachers. Offences included insubordination, absenteeism, meting out corporal punishment, committing fraud and theft, and illegally promoting or expelling pupils.

Sace spokesperson Themba Ndhlovu said sanctions referred to in the report were meted out by departments and not by the council. If Sace found a teacher guilty of a sexual offence, the punishment was to strike them off the teachers’ roll for an indefinite period.

The departments are compelled by law to report only finalised cases to Sace, but Ndhlovu said they will now report complaints to the body immediately after receiving them. 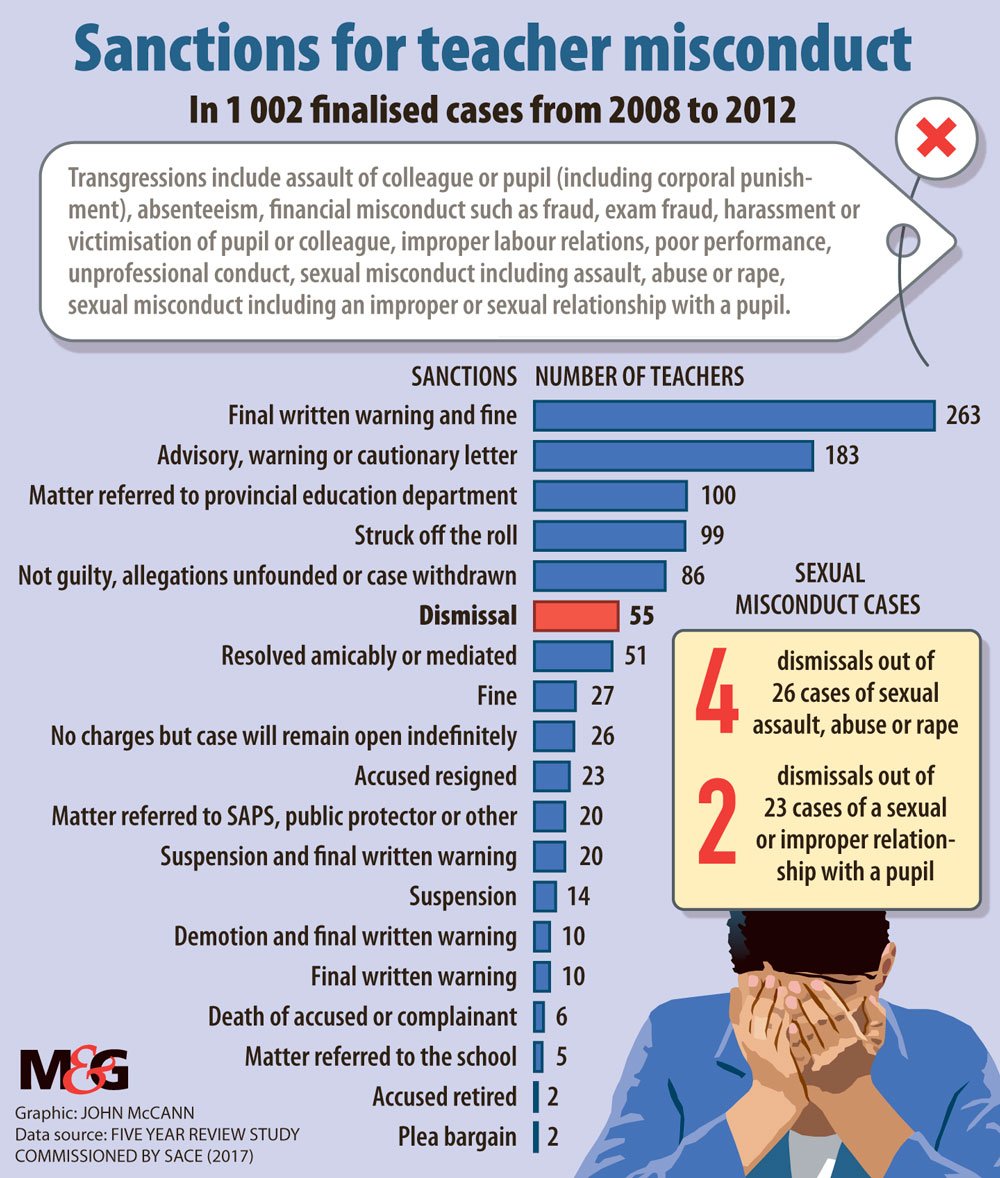 The aim of the investigation, conducted by a management training company, was to help Sace understand why these offences were being committed and whether the sanctions dished out “fit the transgression”.

According to the report, Sace received 2 233 cases of teacher misconduct from 2008 to 2012, which included reports of finalised cases from provincial departments. The report sets out what happened in 1 002 cases where there was an outcome. Of these, 49 related to cases of sexual misconduct and having sexual relationships with pupils, and 209 cases dealt with corporal punishment.

Ten of the 49 teachers accused of sexual misconduct were found not guilty and four cases were referred to the police or the national basic education department to resolve. Four were not charged, three resigned, two received advisory letters, one died and one case was resolved amicably.

Only six teachers of the teachers found guilty of inflicting corporal punishment were dismissed and another 130 got off with a fine and a final written warning.

Ndhlovu said Sace had raised concerns during previous council meetings about the leniency of the sanctions meted out by some provincial departments: “We have noted that the provincial departments are not uniform in the application of their sanctions. There are always anomalies. For example, we are shocked when a fine is given in a sexual case. How do you give a fine in such a case?

“Whether these concerns [about the leniency of the sanctions] were acted upon, I will not know. The intention was to take it to the minister [of basic education, Angie Motshekga].”

Kate Paterson, an attorney working for Section27, a public interest law centre, said Sace was “undercapacitated” and there were often failures in communication between Sace and the provincial departments. Another problem was that the processes require separate investigations and hearings.

Paterson said she was surprised by the leniency in sexual misconduct cases. “Sexual misconduct in school has such a serious effect on a learner’s ability to learn and their sense of dignity that strict sanctions should be imposed on teachers found guilty of a sexual offence.” If teachers were not appropriately disciplined when found guilty of sexual abuse, pupils would be dissuaded from reporting it, she added.

Ndhlovu said the provincial departments’ failure to apply sanctions uniformly had prompted Sace to send out mandatory sanctions in 2012. “Presiding officers [in misconduct cases] are forced to give us valid reasons if they want to deviate from the mandatory sanctions. Of course, it is not a given when you are in a hearing because things happen that change everything. So it’s what will be at play at the hearing that guides the decision of a presiding officer,” Ndhlovu said.

Commenting on Sace’s plans to name the teachers found guilty of misconduct in the Government Gazette, Ndhlovu said they had drafted a proposal that would be sent to Motshekga for approval.

Lisa Draga, an attorney based at Equal Education’s law centre, said some provincial departments displayed a lack of transparency when reporting on teacher discipline. Some departments took independent action against employees in terms of the Employment of Educators Act and this may not always be reported to Sace.

“Where referrals by PEDs [provincial education departments] occur, the completeness and quality of those reports differ by province, which impacts on Sace’s ability to conduct a thorough hearing,” she said.

“Even where proper referral takes place, Sace has massive capacity constraints, both personnel and budgetary, making it near impossible for it to fulfil its mandate.”

Wessel van den Berg, children’s rights and positive parenting unit manager at Sonke Gender Justice, said parents and pupils should be told that they also have recourse to the criminal justice system.