Shivambu apologises for scuffle with journalist

Economic Freedom Fighters deputy president Floyd Shivambu has apologised for a ‘scuffle’ where he assaulted a multimedia journalist inside the Parliament precinct on Tuesday morning.

Video evidence shows Adrian de Kock, who works for Netwerk 24, being cornered by Shivambu and a man who appeared to be his bodyguard. Shivambu then appears to grab De Kock by his throat and holds him down against a wall.

The incident was filmed by Independent Newspapers journalist Jason Felix.

He noticed Floyd Shivambu arriving and took photos of the EFF MP as he pulled up in his car. When Shivambu exited the vehicle, De Kock asked him for comment on the De Lille hearing.

But he says Shivambu reacted violently.

“As I walked up to him, he said: ‘No, why did you take my picture? You have no permission to take my picture,’ so he said I must delete it,” De Kock said.

De Kock told the EFF MP he could not delete the photo. “So, he grabbed my camera and tried to delete it himself,” said De Kock.

He said three people then surrounded him and attempted to take his cellphone.

“And the next thing Floyd grabbed me by the throat and said: ‘You don’t have my permission’.”

The incident took place opposite the Marks Building. The assault ended, De Kock said, when other journalists rushed towards them and began taking photographs and video.

Shivambu then released De Kock, the journalist said, and went inside the Old Assembly building.

De Kock says he will open an assault case against Shivambu.

In a statement released after the incident broke on social media, the EFF deputy president admits that his “impatience” was inappropriate.The scuffle, according to Shivambu, was not an assault on the journalist nor on media freedom. Shivambu also mentioned in his apology statement that he will not be granting media interviews about the incident as there are more important matters to discuss. 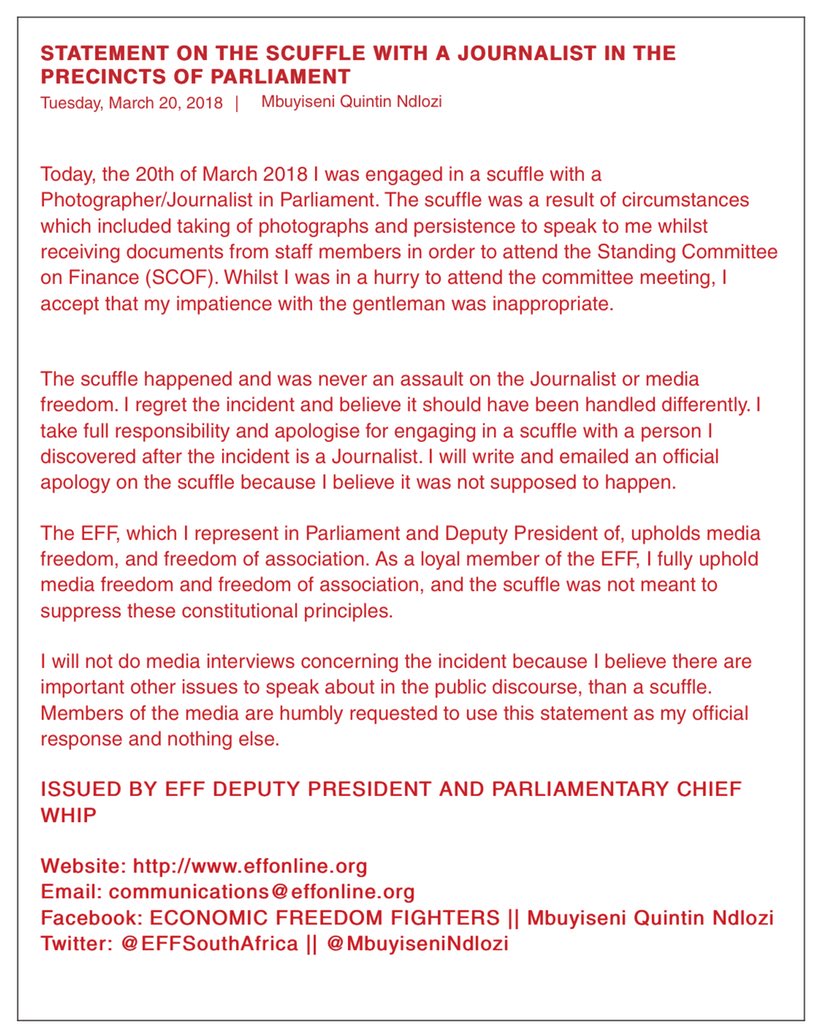 This content of this article has been updated  to reflect information provided after publication.