Breakdown: Why is petrol so pricey?

Wondering why petrol is so pricey? Because the Automobile Association (AA) feels this is something every motorist should be informed about, it has published a breakdown to educate consumers on how the fuel price is determined, and where the money from fuel levies is allocated.

The money collected through this tax is administered by the National Treasury. It is treated as a general tax and not, as many people assume, for road-related expenses.

Money collected through the RAF levy portion of every litre of petrol sold is used to fund the RAF, which uses the money to compensate victims of road accidents. 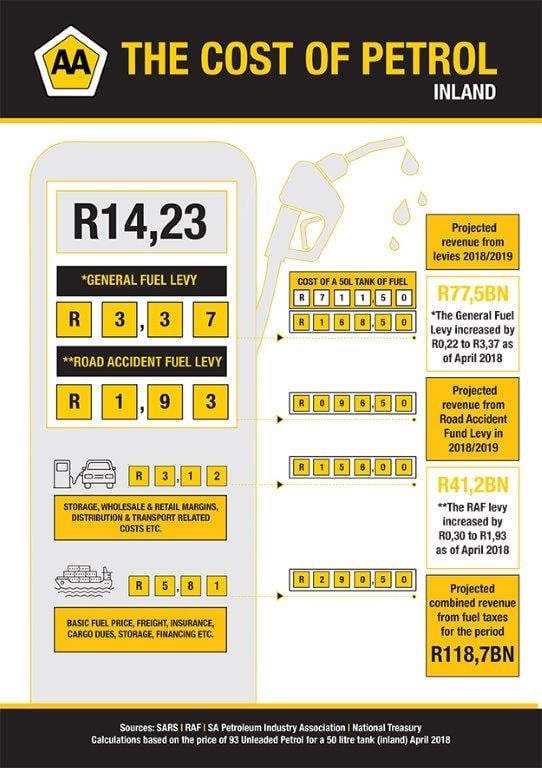 Combined, the general fuel levy and the RAF levy constitute R5.30 of every litre of fuel sold in the country.

The difference between inland and coastal fuel prices is mainly due to transport costs of the fuel from depots at the coast to inland outlets.

The basic fuel price (BFP) is calculated based on costs associated with shipping petroleum products to South Africa from the Mediterranean area, the Arabian Gulf and Singapore. These costs include insurance, storage, and wharfage. The current BFP is R5.81.

Other costs associated with the petrol price include transport costs (from the harbour to inland areas), customs and excise duties, retail margins paid to fuel station owners, and secondary storage costs. These costs currently total R3.12 for inland petrol, and R2.78 for coastal petrol.

Movements in these costs over the past 12 months include an additional 10c/litre charge in transport for fuel from coastal areas to Gauteng, and an 11c/litre increase in the retail margin at both inland and coastal stations. 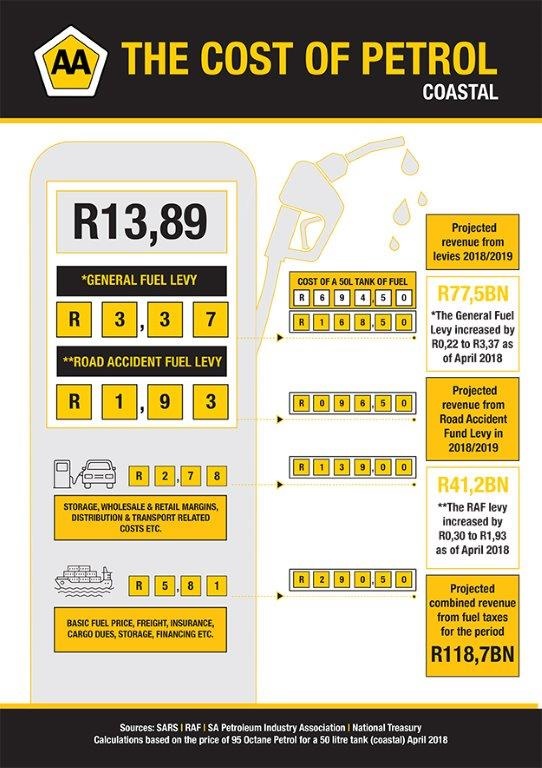 At the beginning of April, road users across the country paid between 69c and 72c more for a litre of fuel at the pumps. According to the AA, this massive increase was due to a number of factors, namely strengthening international petroleum prices and the addition of 52c to the fuel levies.

These fuel levies are mainly in the form of two indirect taxes: the general fuel levy, and the RAF levy. The increases to these levies were announced in Budget 2018 in February, but only came into effect at the beginning of the month.

At the time the AA warned that any such hikes above inflation will hurt the poorest of the poor. Increased fuel prices also impact public transport costs as well as the cost of transporting goods.

Given current increased international petroleum prices and the volatility of the rand against the dollar, it is likely that the price of a litre of petrol will increase, at least in the short term, the AA believes. – Fin24