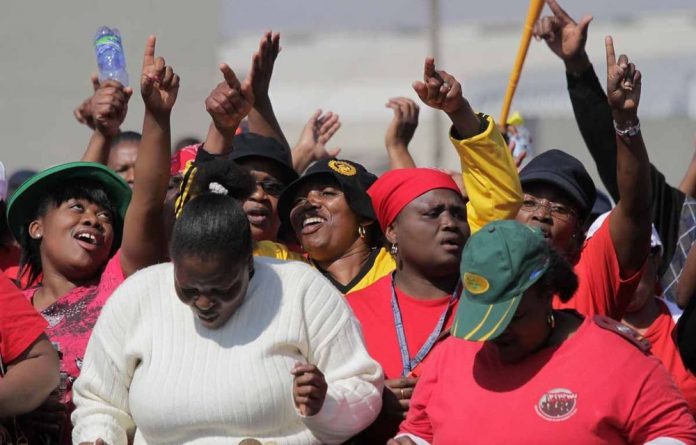 The protracted public sector wage negotiations are close to being clinched with 42% of the employees represented at the Public Service Coordinating Bargaining Council (PSCBC) having signed the three year deal.

“It will take us some time, we are not there yet with the majority agreement…as long as I get to 50%+1,” said PSCBC’s general secretary Frikkie De Bruin.

Two of the largest unions in the public sector, The Police and Prisons Civil Rights Union (Popcru) and the South African Democratic Teachers’ Union (Sadtu) have said they have inked the deal.

De Bruin explained that other unions who have signed do not want to make this public yet as they are being labelled “sell outs” by labour organisations who have rejected the agreement.

The PSCBC will be able to implement the deal after 50%+1 employees, as represented by their unions have signed. They have until approximately June 18 before government can implement the agreement unilaterally, 21 working days from the PSCBC presenting the document on May 21.

The three-year wage deal will see 7% increases for junior employees for 2018/2019, while mid-level employees will receive 6.5% increases and senior staff will see raises of 6%.

The increases for the second and third years of the wage agreement are on a sliding scale. It will also de-link spousal housing allowances for junior employees from September and for mid-level and senior staff 12 months later.

Unions who tabled their demands in October initially wanted increases of between 10% and 12%.

The seven months of negotiations saw several delays with the departure of former President Jacob Zuma and the new ministers in the President Cyril Ramaphosa administration under pressure to contain the public sector wage bill,

The PSA, the largest of the unions not affiliated to the Congress of South African Trade Unions (Cosatu) was at odds with the ANC’s labour ally, accusing leaders of cosying up to Ramaphosa, to the detriment of their members.

The PSA is sticking to its demand for 10% increases across the board and the union’s general manager Ivan Fredericks told Fin24 on Tuesday they were finished balloting their 238 000 members towards a strike and will start collating their responses.

Sadtu on Monday called the PSA a puppy which “barks loudly in a provocative manner whilst relying on the bulldogs to fight”.

The teachers union claimed that the PSA has no history of industrial action and the final agreement “was closer to what would have suited the workers”.

Government is standing firm with its above inflation offer, insisting that it has no room to manoeuvre within the tight budget.

The PSA responded in a statement on Tuesday night acknowledging it seldom embarked in strike action as they “have a long history of success when dealing with labour matters”.

READ MORE: Sadtu accuses PSA of being ‘all bark and no bite’

“If the majority unions sign this agreement, PSA would have lost the fight but not the war and we would have been defeated by the unions,” the statement read.

Moody’s Investor Service in March said the market had already priced in increases of 2%+ Consumer Price Index (estimated to be 5.2% in 2018 by the Bureau for Economic Research) which the rating’s agency called “disappointing”. — Fin24