A few years ago Ga-Mokgotho and the Mankele residents were renowned for their innovative ways of crossing the majestic Lepelle (Olifants) River, which separated their mountain-locked village from the rest of the Greater Tubatse municipality. They used a makeshift cable car (segwaiwai) to help learners and community members cross the river to get to the nearest village of Penge, or 36km further down to the town of Burgersfort. When the bridge was commissioned in 2004, it brought to an end an era of risk-taking and anxiety for the locals.

The spirit of innovation is still rooted in this community nestled at the foot of the various mountain ranges, including the Drakensburg. For years they have not tapped into the readily available water from the Lepelle River as a source; instead they rely on the springs found at the top of Mapelwane Mountain to water their gardens, feed livestock and help them engage in entrepreneurial ventures such as brickmaking. This is an ideal example of community-driven multiple use of water (MUS). They have kept it alive for over 33 years, making Ga-Mokgotho a scenic garden; the 4 300 residents enjoy a comfortable existence.

Most homesteads at Ga-Mokgotho resemble stretches of orchards, with mango, guava, pawpaw, avocado and banana trees in each yard. Usually there are no less than five mango trees per yard. These are functional trees; Lazarus Mokgotho says they are part of residents’ daily life. He has a 1 500 square metre orchard, in which he has planted a variety of fruit trees and vegetables.

Mokgotho points out to the many mountains that surround his village, especially Mapelwane, Rotole, Poung and Sepitsi that supply the village with water. Since 1987 he has connected water pipes from the mountain to the village as a way of sustaining his livelihood. He is regarded as a forerunner in community-driven water multiple usage in this area, among the first to start connecting water directly from Mapelwane mountain and pipe it down to water his garden.

“I started this project in 1987 after getting some pipes that I connected to the well at the top of the mountain. Since then a number of people have emulated the work that I did and also attached their pipes to the source. Thankfully, we haven’t experienced many problems since we started,” Mokgotho says.

Stephen Mathake joined Mokgotho in 1989. He says that his father bought him pipes, which encouraged him to start with the process of drawing water from the mountain. They both laud the support that came later from Tsogang Water and Sanitation as a great way to ensure that they sustain their methods of collecting water. 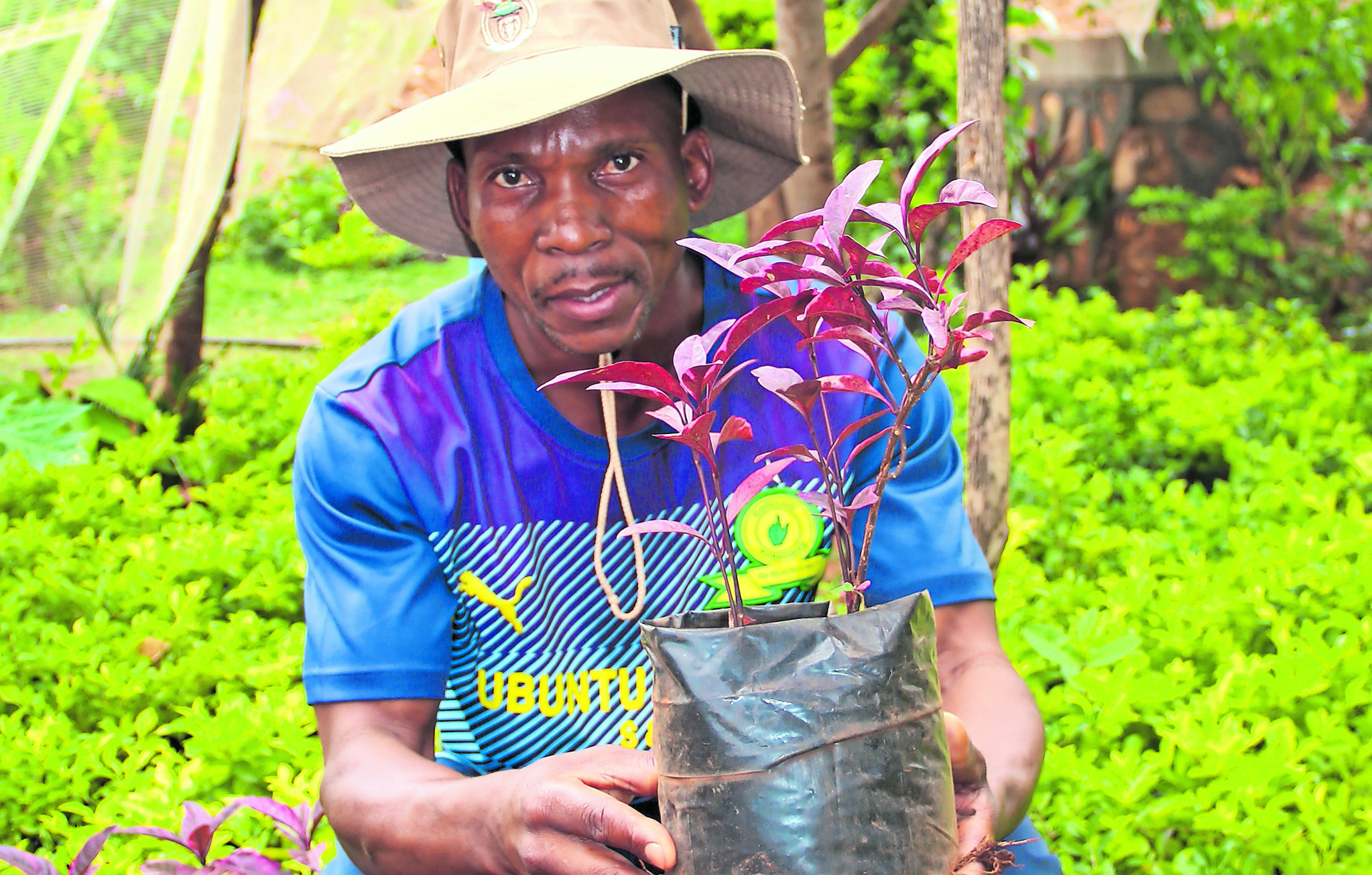 MUS National Learning Alliance member in an orchard in Ga-Mokgatho

Since 2006 Tsogang, a developmental nongovernmental organisation with close working relations to the Water Research Commission (WRC), rode on the back of the success of this community endeavor, by examining areas where the communities would need to be assisted in sustaining the scheme. They helped build a 220-kiloliter reservoir, which receives water from the source, and uses three inlet pipes to feed the reservoir. There are now three outlets to the village. The community follows a schedule to receive water; some get it between Monday and Wednesday and others, on days in between. There are also a few tanks used to store water in the village. The system used for this relies on gravity rather than any pressure or mechanical force, making it easy to maintain.

The system is efficient and reliable, due to the interventions the WRC made through Tsogang. It has made lives of the villagers sustainable, and given them the ability to diversify on the use of water.

Leah Maebane is one of the recipients of the 15 Jojo storage tanks the community received.She says since she received the 2 500-litre tank in July 2018 she is able to do more than she did previously. In her yard she has started a brickmaking enterprise that serves the local community, and has been steadily growing. In addition, she has now a fully developed garden with a variety of vegetables and fruit.

Meabane says: “I am thankful to the MUS people who have helped me start up this business. Out of the proceeds I get from these projects I started building the house that I hope to finish this year. I now have consistent supply of water all the time.”

Another beneficiary of the interventions from WRC is Salmitah Mahlakoana, who started a flower project in 2014. She plants flowers, sells them to the locals and delivers the rest to Burgersfort. She says her startup was a bit shaky until 2017, when she received direct help from the MUS project. She says her water is flowing well, but she could do a lot better with a reservoir in her yard. She gleefully speak about how she uses the money she received to take her children to school; her aim is to sell more flowers, so that her son, who is now at a tertiary institution, will be able to get a laptop when he seeks employment.

Lindi Magabe story began with a failed drop-in centre, which lacked funding and pushed her and her friends into vegetable farming. The local school had a portion of land that they offered to her co-operative to plant vegetables. They plant spinach, mustard spinach, cabbage and other vegetables. They then sell the vegetables to the locals as well as in Burgersfort. Initially they used the boreholes sunk at the school, but these did not yield enough water. The MUS project intervened and brought them a special pipe that they now use to water the garden. So successful has been the garden that they have agreed that the school shall get 25% of the proceeds of sale. They have also recently established a relationship with Shoprite in Burgersfort, which is supplying them with seed. Magabe says the idea is that they should eventually be able to sell their vegetables directly to Shoprite on a long-term agreement.

As the sun sets early on the mountains and visitors slowly ebb out of Ga-Mokgotho, the brilliant waters of Lepelle greet the eye, a symbol of the innovative life of the locals, who now have room for economic growth, far from city life.