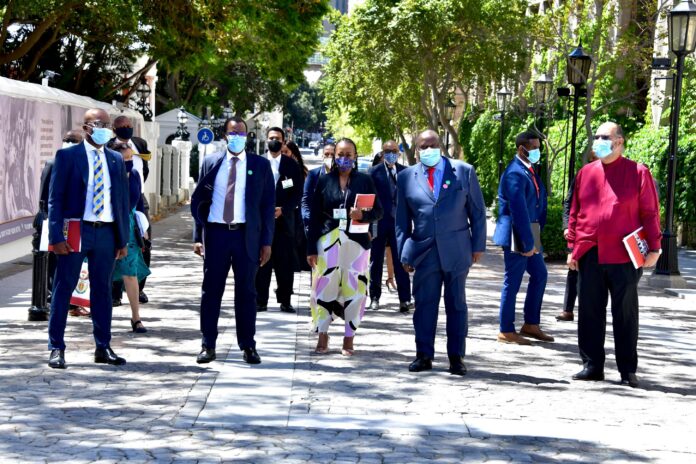 Finance Minister Tito Mboweni has doubled down on his commitment to curb government spending by slashing the public sector wage bill.

The treasury’s budget document, released on Wednesday, restated its plans to radically reduce spending on public servants’ compensation, which accounts for 32% of government expenditure over the medium term.

Treasury views an increase in public service compensation as the primary culprit for the sharp rise in government spending over the last decade.

This announcement comes after the labour appeal court ruled in favour of the national treasury in December 2020, empowering it to renege on salary increases set out in the public sector wage agreement. This saved the government R37-billion.

Trade union federation Cosatu has hit back at the treasury for failing to honour the wage agreement, accusing the government of undermining collective bargaining.

In his speech on Wednesday, Mboweni said Public Service Minister Senzo Mchunu is working with organised labour to achieve a fair public-sector compensation dispensation when negotiations on a new multi-year wage settlement begin later this year.

Cutting spending aims to stabilise the debt to GDP ratio and narrow the budget deficit, which has doubled since the 2020 budget from 6.8% of GDP to an estimated 14% in 2021.

The 14% budget deficit is slightly higher than analysts predicted.

The deficit, the largest on record, results from expanded government spending in response to the Covid-19 pandemic.

Mboweni said: “Continuing on the path of fiscal consolidation during the economic fallout was a difficult decision. However, on this, we are resolute. We remain adamant that fiscal prudence is the best way forward. We cannot allow our economy to have feet of clay.”

Compared with the 2020 budget, the main budget non-interest expenditure will be reduced by R264.9-billion, or 4.6% of GDP, over the medium term. Most of these adjustments are to the wage bill.

Over the medium term, the main budget non-interest spending is significantly lower than the 2020 budget estimates, reflecting large reductions — mainly to the wage bill — to stabilise the debt-to-GDP ratio.

However, relative to the 2020 medium-term budget speech, spending has been revised up over the next two years, mainly for additional Covid-19-related spending.

About R11-billion has been provisionally allocated towards the public employment initiative in 2021-22. According to the budget, the initiative has created 430 000 jobs and aims to create another 180 000 by March 2021.

Even so, the initiative will likely not be enough to stem the tide of the jobs bloodbath caused by Covid-19, which has left 1.4-million people unemployed even as the economy slowly recovers.

To attend to Covid-19’s effect on employment, the temporary employer/employee relief scheme has been extended to April 2021. This will increase spending on the scheme to R73.6-billion in 2021-22.

The special Covid-19 social relief of distress grant has also been extended to April 2021. However, over the medium term, the total social grants budget will be reduced by 2.2%.

According to the budget review, the number of beneficiaries is expected to increase by about 300 000 people over this period.

Though spending on health will increase in the current year to R247-billion, this will be reduced in 2023-24. These reductions will be focused on compensation.

But even if the expenditure is decreased in the medium term, it will be difficult to offset the effects of debt-service costs, which — estimated at R916-billion over the medium term — exceed all individual consolidated spending items by function, other than social development, learning and culture.

According to the budget, debt-service costs are expected to average 20.9% of gross tax revenue over the medium term. South Africa’s borrowing remains large by developing-country standards, and debt is projected to grow by 7% of GDP over the next three years.

This means that money that could be spent on economic and social priorities is redirected to pay local and overseas bondholders.