With various modelling groups estimating that the daily rate of Covid-19 deaths may rise to more than 300 people, the next few months are critical for the country.

Currently 481 people have died since the first two coronavirus deaths were reported on March 27, and the average number of daily registered cases is more than 1 000.

In the past week, the number of positive cases as a percentage of the number of people tested has risen from an average of 2% to more than 3%. This means that South Africa is well on its way to a spike in the disease.

This steady increase comes after weeks of calls for the government to reveal the basis of its decisions for lockdown and other measures to restrict the spread of Covid-19, the modellers and their theories were presented to the country on Thursday last week in a Zoom call hosted by the department of health.

Though the speeches were loaded with jargon it was agreed by most participants that the country will face large mortality numbers, even higher infection rates and a hospital system that will not be able to cater for the high number of coronavirus cases.

The main modelling group used by the department of health is the South African Covid-19 Modelling Consortium, which mainly made up of researchers from the top universities and the National Institute of Communicable Diseases (NICD). It projects that about one million people will be infected with Covid-19 and show symptoms.

The peak in cases is estimated to be in July or August. This essentially means that by that time more than 8 000 people may test positive for the virus every day.

According to the Modelling Consortium, the long-term projections show the spike in mid-August. This is being optimistic: “Lockdown has flattened the curve and pushed the peak later.”

Based on the Modelling Consortium’s information, about 75% of cases are asymptomatic, but can infect others. These people may possibly not go for testing because they have no symptoms. About 95% of people who show symptoms experience mild to moderate symptoms. On average, 3% of people will have severe Covid-19 and less than 2% will be critical.

But these projections are subject to considerable uncertainty and variability.

The Actuarial Society of South Africa estimated that even with the lockdown there may still be about 50 000 deaths. That translates into about 500 deaths a day at the peak of the pandemic.

This would be in the same range as occurred in the United Kingdom, which in April was seeing more than 560 deaths a day. At that time about 30 000 people had tested positive for the coronavirus in that country. 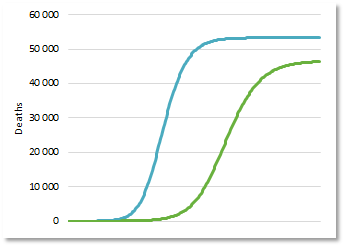 Much remains unknown, according to the Actuarial Society of South Africa. These projections show that there could be more than 40 000 deaths.

This may or may not be the picture for South Africa, but at our peak, we will not be far off. On Sunday, President Cyril Ramaphosa made it clear once again that the lockdown would only delay the spread of the virus and would not be able to stop it.

“Until there is a vaccine available to all, the coronavirus will continue to spread in our population. This means that we must get used to living with the coronavirus for some time to come,” he said.

Currently, on average about 20 people die every day.

Deloitte projections for ventilators and oxygen required until August

Ramaphosa added that of the more than 11 000 active cases, 842 people were in the hospital and 128 of these were in intensive care.

The hospitals can handle the number of patients, but by August there will be a shortage of intensive care beds, according to rough estimates by Deloitte for Business for South Africa.

Deloitte’s numbers show that in three months there will be a need for more than 7 000 ICU beds and close to 7 500 high care beds.

The Modelling Consortium’s models show that even under its optimistic scenario there will not be enough beds; 25 000 ICU beds will be required just before September. But it’s likely that general bed space will be adequate.