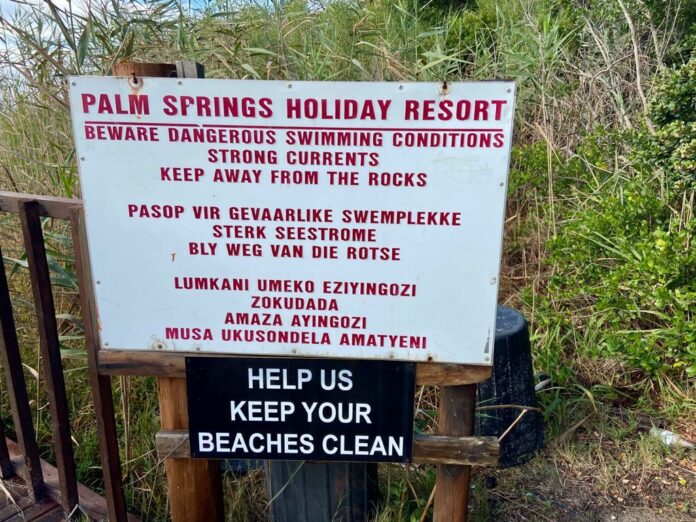 A 15-year-old attending a leadership camp organised by Equal Education (EE) drowned off a beach near East London last week. The camp was held at Palm Springs Resort and no lifeguards were present. A notice board warned of rip currents.

Equal Education’s general secretary, Noncedo Madubedube, said in a statement that 30 learners, who are members of the organisation, from 19 schools in the province and that they were accompanied by 10 staff members.

On Thursday last week, some of the learners went to swim under the supervision of one staff member. Madubedube said the learners were “instructed to only go into the water if they knew can swim”.

“Avethandwa got into distress on the beach and tragically drowned …The beach is frequented by swimmers although the beach does not have a lifeguard and notices about a current are visible at the entrance to the beach,” said Madubedube. “While swimming, she then got caught in a rip current, which made it impossible to try to reach her.”

Divers searched for Nokhangela on Thursday. Her body was recovered on the beach on Friday.

Madubedube said the EE’s sister organisation, Equal Education Law Centre, is conducting a fact-finding investigation into the drowning and that the outcomes will be handed to an independent reviewer.

“Disciplinary proceedings, if necessary, will be conducted depending on the outcomes of this investigation,” she said. “In addition, as a precautionary measure, we will undertake a review of all practices in relation to camp safety and will not hold any other camps until the finalisation of such a review.

“Given that the police have announced that an inquest will be held into this terrible accident, we also believe justice will best be served by supporting the law enforcement agencies. We have already begun supporting this process.”

The Eastern Cape department of education alleges that the organisation hid the incident from the department. In a statement the provincial department’s spokesperson, Malibongwe Mtima, said the department learnt about Nokhangela’s death from the police.

Madubedube has refuted the claim that the organisation hid or delayed reporting the incident to the provincial department of education.

“The MEC [Fundile Gade] hopes that Equal Education will take responsibility and equally apologise for this reckless incident and stipulate why they were hiding this incident from the department,” reads the statement.

Mtima said that Gade had also requested law enforcement agencies investigating the incident “to leave no stone unturned in this tragedy”.

Gade has also asked for the Buffalo City district manager to provide a report on who authorised the camp. The EE said this was not the first camp it had held at the resort and it had also sent a consent request to parents.

“A thorough investigation into the incident is required to ensure that all the facts are established and that those found responsible must be held to account for the unnecessary loss of life,” said Mhlanga.

Madubedube said the day Nokhangela’s body was found one of the EE’s staff members in the province called several officials in the department to inform them about the tragedy.

“Our immediate priorities were towards the grieving family, and supporting the staff and Equalisers who were at the camp, as well as cooperating with the National Sea Rescue Institute and the police. On Friday [30 April], we spoke to the principal of the school that Avethandwa attended, on the phone. So we don’t understand the statement of the [provincial department] given that we reached out to them on the same day as Avethandwa was found,” said Madubedube.

The Sowetan reported on Thursday that Nokhangela’s aunt said when she had asked who authorised the swimming in an area clearly marked dangerous, she never received a response.

The Gauteng department of education said that the excursion was not authorised by it, and later fired the principal, Malcolm Williams.