Maria Matube’s yard is a pool of raw sewage that has been flowing for as long as she and her husband have been living in their Boipatong RDP house in the Vaal. The couple previously owned a shack in the same yard. With their new home came a flushing toilet inside and clean drinking water, a dream-come-true for the couple.

But over the years, their fairytale has turned into a stinking nightmare. For Matube’s husband, who lives with a disability, even getting out of the sewage-flooded yard for his clinic visits is a battle.

“We are really struggling,” she says.

“I end up calling neighbours to come and help carry him outside of the gate. Even if we had a wheelchair, we would still struggle to get out of the yard because the water is everywhere, especially at the gate.”

The couple, who are both unemployed, draw an income from tenants who rent shacks in their yard.

“I can’t even remember when this thing started, but it has been years now. Back then, we would hire a plumber to fix the pipes, but it would just get worse. I now have to go to neighbours’ houses to use their toilet to avoid it spilling over inside and outside the house.”

In February, the South African Human Rights Commission released its long-awaited report into the sewage contamination of the Vaal, finding that it has violated a number of constitutional rights, including the rights to human dignity.

“It cannot be that for a long period of time, raw, untreated sewage in homes, streets, in schools and in public areas accords with one’s sense of dignity,” the report states.

It reveals how millions of litres of untreated sewage enter the Vaal river system daily from the collapsed wastewater treatment infrastructure in the Emfuleni municipality, which is under partial administration. This affects 19-million people who rely on the polluted river for drinking, domestic and commercial use — and ultimately threatens Gauteng’s water security.

“In the absence of a timely and effective response from the multiple spheres of government, Gauteng’s most vital water resource may very well have been irreparably damaged,” the report warns.

The commission made several recommendations, mooted criminal charges for officials, and requested the three tiers of government to respond within 60 days.

But little has improved in recent months, say local residents. In Vereeniging, the sickening stench of sewage wafts all the way down a road that leads to a series of luxury estates set on the banks of the Vaal river.

“We don’t just wear masks because of Covid-19 — it’s because of all this shit,” says Kas Lubbe bitterly, as he shows the culprits: two broken pump stations, a few kilometres apart, where torrents of sickly-grey sewage gush straight into the river.

For Lubbe, watching the Vaal river deteriorate from being a celebrated water sports destination to the polluted water resource that it has become, is a disappointment.

“Some days you can’t even open your doors and windows because of the smell from the sewers,” he says.

“We were all hopeful about the commission’s report, but the situation is even worse than before. Now, nothing is working. The sewage is just flowing straight into the river.”

Mariette Liefferink, the chief executive of the Federation for a Sustainable Environment, says the latest instream water quality results from Rand Water show alarmingly high levels of E.coli, with 8 975 300 counts per 100ml at the Rietspruit at Sebokeng and ammonium levels of 16.52.

“Based on these results it is highly likely that the ammonia levels are acutely toxic to the receiving environment,” Liefferink says. “This will pose significant health risks to downstream water users, including people even washing their hands.”

The general limits for discharge wastewater into the receiving environment is 1 000 E.coli per 100ml; the drinking limit is zero.

The Vaal remains up shit creek 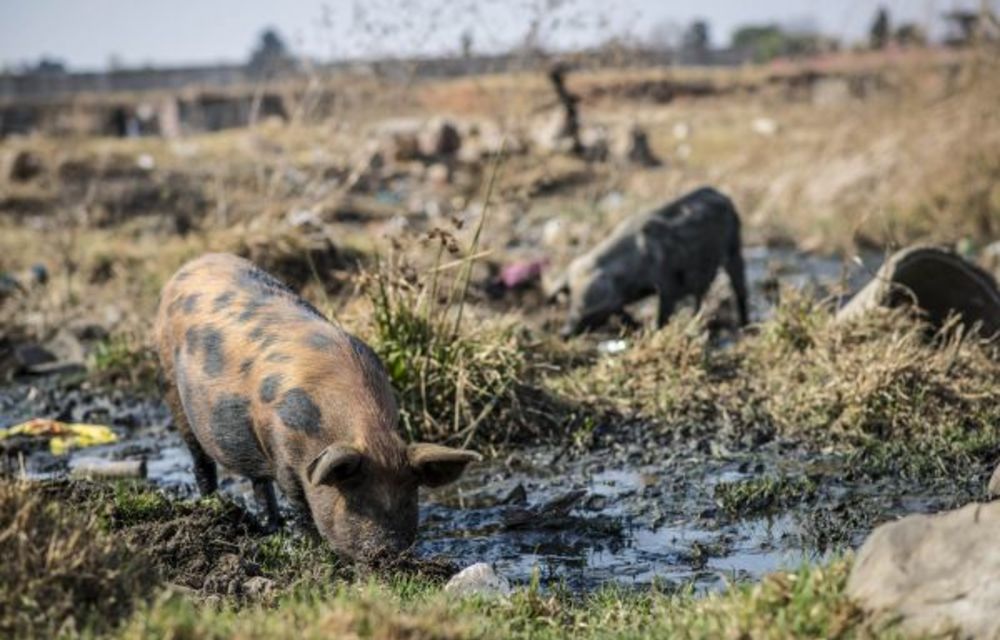 Maureen Stewart, the vice-chairperson of local environmental watchdog, Save the Vaal Environment (Save), tells how “amazing rains” in January swept away the sewage sludge at the mouth of the Rietspruit and in Loch Vaal, both hotspots of sewage pollution.

In February, when the Vaal Dam’s sluice gates were opened, it flushed the river system through Vereeniging and Vanderbijlpark. “We had a clean river for the first time in 10 years. However, as a result of the lack of action on the part of the department of water and sanitation, we are seeing the pollution creep back into the river in all hotspots and are now experiencing blue algae.”

She says the status of the municipality’s wastewater treatment system hasn’t changed since 2017, when the pollution reached crisis proportions.

“The Leeukuil plant is working under capacity because the pump station system remains broken, so E.coli counts in the Vaal River at Vereeniging and Vanderbijlpark remain high.”

The Rietspruit plant is working at 30% capacity.

“Thanks to the minister of water and sanitation, Lindiwe Sisulu, Module 6 of the Sebokeng plant is operational … This means the raw sewage into the Rietspruit from this plant has been reduced by 50%.”

Emfuleni’s wastewater treatment department has not been capacitated by the Gauteng government, as promised, and does not have the resources to deal with the ongoing pipe bursts and leaks of raw or partially treated sewage in the streets and into the river “let alone manage a maintenance programme”.

The department’s spokesperson, Sputnik Ratau, did not respond to the Mail & Guardian’s requests for comment.

As he steers his homemade barge out on the expanse of Loch Vaal, Malcolm Plant, the chairperson of Save, tells how he feels as if he is fighting a losing battle. “Nothing has been done.”

He shows how parts of the river are coated in sewage slime. This used to be their children’s swimming pool.

“Now, you can’t come in here, you take your life into your own hands.”

There’s a new threat lurking in the river: water lettuce, an invasive alien plant that starves water bodies and their aquatic species of oxygen, is toxic to animals and humans, and is a symptom of eutrophication.

“If nothing is done, this will cover the river like a mat,” warns Plant.

At his jetty, a dead fish floats, upturned, in the river. “We see dead fish every other day,” he says. “There’s just not enough oxygen in the water from all this sewage.” The circle of damage is huge. “The river can only take so much and when it collapses, it will kill everything … I don’t think in our lifespan it will ever recover.”

Last week, Sisulu announced the government’s plan to invoke Section 63 of the Water Services Act, empowering her department to take over water and sanitation services within Emfuleni and help it comply with the commission’s recommendations. “We are expected to have made a difference within three years,” she says.

Stewart applauds this move with the provision of sufficient funds being allocated, but notes that similar initiatives in recent years have failed.

Emfuleni’s executive mayor Gift Moerane says the role that national government is playing will “bring some closure to some of the problems that we are facing in terms of resources, in terms of capacity, so we are open to any support that can take the people of Emfuleni out of the kind of crisis they are facing”.

Stewart has heard rumours that Sisulu may be shifted to another portfolio. “She is the first minister to have given time and shown sincere interest in the Vaal pollution problems over the past 15 years.”

The nonprofit is poised to return to court, after having suspended action for six months to enable Sisulu and the national and provincial governments to implement an intervention plan.

Sheree Bega
Sheree Bega is an environment reporter at the Mail & Guardian.