The government has postponed its R10-billion long-term solution for acid mine drainage, which involves turning partially treated acidic mining water into potable or industrial water through desalination and selling it to -consumers.

Funding constraints and a recalibration of the salinity and hydrology model for the integrated Vaal River system has meant the long-term solution has been “provisionally deferred”, according to Bashan Govender, the project manager of mine water at the department of water and sanitation.

“Its magnitude as well as the timeline for its implementation will be determined after the recalibration of the Vaal River system,” Govender said this week.

Acid mine drainage is the seepage of toxic, polluted water from mining areas, which carries metals, radionuclides (atoms that emit radiation) and salts in concentrations that are hazardous to all forms of life.

A decade ago, the minister of water affairs directed the Trans-Caledon Tunnel Authority to implement short-term interventions to deal with acid mine drainage.

This included the upgrading of the Western Basin acid mine drainage treatment plant in Randfontein in 2012 and the construction of the Central (Germiston) and Eastern (Springs) basins treatment plants, in 2014 and 2016 respectively, at a cost of R2.6-billion.

The plants pump 180-million litres of acid mine water every day from the three underground basins, neutralise the acidic water and then discharge it into the Vaal River system and the Crocodile West river system, at a cost of R293-million a year.

But the water is still not fit for use because of its high salinity and 362 tonnes of total dissolved solids — salts — enter the Vaal Barrage daily from the partial treatment.

The second phase, or the long-term solution, was intended to produce fully treated water from the first phase for reuse, which would significantly increase water supply to the Vaal River system.

Water services worse than in 1994 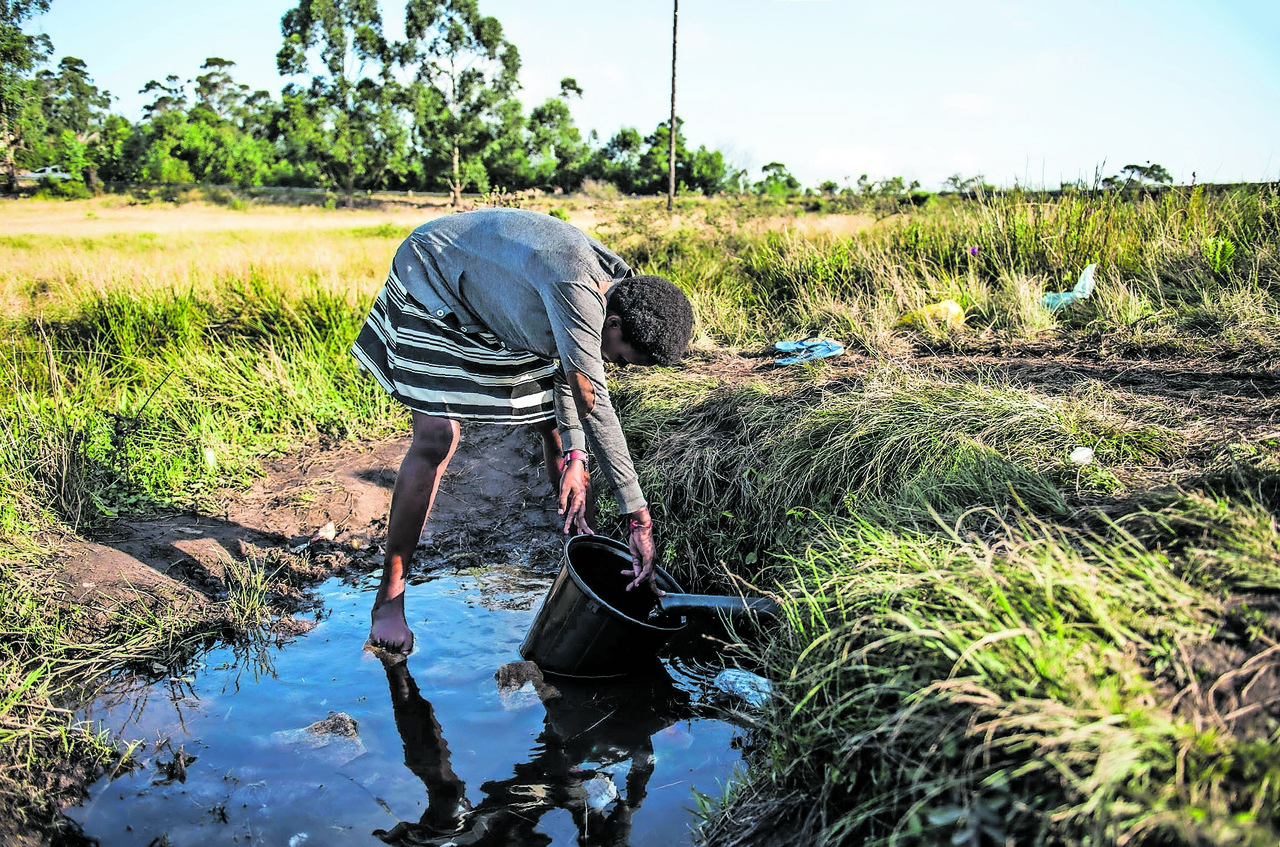 In 2018, South Africa’s water and sanitation master plan envisioned that, by 2040, treated acid mine water would make a “significant contribution” to the country’s water mix.

But Johann Tempelhoff, an extraordinary professor at the South African Water History Archival Repository at North-West University, said: “The real issue is that the state has to pay for the treatment plants. It takes up a lot of energy and consumes a lot of water and this releases a lot of saline water into the system. The department has indicated it doesn’t have the money to upgrade the quality in its [short-term] treatment process.”

There is little appetite among household and industrial consumers for treated acid mine drainage water because of the high costs involved, according to Tempelhoff.

“When the department of water and sanitation started its acid mine drainage treatment strategy in the early 2010s, it was a desperate move to avert a real crisis. Now we’re sitting with this conundrum.

“It’s going to be easier to clean the [sewage-polluted] wastewater of Emfuleni [local municipality] than cleaning the acid mine drainage from either the West, Central or Eastern basins at a reasonable cost.”

To illustrate how poisonous acid mine drainage is, Tempelhoff cites the case of the acidic Rio Tinto in Spain, which flows a deep toxic red for 50km, after it was polluted in mining operations more than 5 000 years ago.

“That river is still polluted — you can’t use it for anything else. It’s dead. That is the crisis we are sitting on with acid mine drainage, “ said Tempelhoff. “Essentially it’s something that extends over thousands of years.”

The problem of acid water from mines has a long history in South Africa too. Mariette Liefferink, the chief executive of the Federation for a Sustainable Environment, points out that 120 years ago, acidic water associated with mining activity was already an established problem. She said acid mine drainage is a legacy issue and will continue for many years after a mine closes.

“If there is enforcement, it does not yield the desired outcomes,” it states.

The draft policy recommends that new mining ventures should prove, beforehand, that the cost to deal with the residual effects associated with mining, such as acid mine drainage, are catered for.

The harmful effects caused by mine water drainage are often externalised by the mining sector, whether during active mining or subsequent to mine closure. “Financial provision predominantly applies to surface rehabilitation,” the document notes.

The 2015 financial provisioning regulations require that a holder of a mining right must make financial provisions for concurrent rehabilitation as well as for latent and residual effects, including the pumping and treatment of polluted or extraneous water.

Liefferink said that although the polluter-pays principle, including its retrospective application, is intrinsic in the National Environmental Management Act (Nema) and the National Water Act, “enforcement is problematic because of the liquidation of companies, transferral of environmental responsibilities and liabilities, change in ownership, the disconnect between the Company’s Act, the Insolvency Act and environmental legislation”.

Catherine Horsfield, the programme head for mining at the Centre for Environmental Rights, said a major problem with enforcing the polluter pays principle in the mining context lies in the failure by the departments of mineral resources and energy and water and sanitation to enforce the law in relation to financial provision, which was previously under the Mineral and Petroleum Resources Development Act (MPRDA), and is now under Nema.

“Since the mining industry is not the best at self-regulation, the principle doesn’t manifest,” she said.

Nema, and previously the MPRDA, prescribes that before a mining company can receive environmental authorisation, the cost of rehabilitating damage to the environment as a result of the mining must be properly assessed. Money must be collected by the department of mineral resources and energy from the mining company as security for those costs, kept safe and secured for rehabilitation.

“In our work we see how the assessment process is flawed,” said Horsfield. “Mining companies under-assess the environmental liability and the department rubber stamps the assessment and does not adequately collect the funds and secure them.”

As a result mining starts without sufficient financial provision to ensure the rehabilitation is properly funded.

“The damage is done, the reserve is pulled out and the profits reaped and, by the time the reserve has dwindled and mining slows down, the mining company has either abandoned the mine or on-sold the mining right to a smaller company that cannot afford the environmental liability,” Horsfield said.

The state is loath to litigate, particularly against foreign companies. “From engaging with some state actors around the failure to collect financial provision upfront, we understand that the state is reluctant to do so as it makes the operation ‘too expensive’ for the developer and that, the state fears, will deter the investment,” she said.

“It seems the potential for short-term gain from the development trumps the long-term costs of environmental and water resource damage, since these are borne not by the polluter who reaped the profits, but rather by communities affected by mining in the first instance, broader South Africa in the second, the state and the taxpayer.”