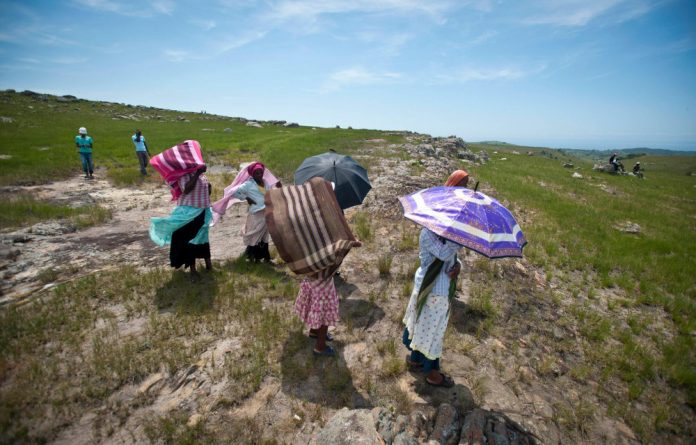 A civil society organisation says Mineral Resources and Energy Minister Gwede Mantashe has shown himself to be “woefully unconscious and ignorant of the times we are living in” by accusing South Africans opposed to Shell’s oil and gas exploration off the Wild Coast of a colonial and racist agenda “that seeks simply to protect butterflies”.

Nonprofit group Sustaining the Wild Coast (SWC) was responding to Mantashe’s description of protests against Shell’s months-long 3D seismic survey between Morgan Bay and Port St Johns as “apartheid and colonialism of a special type, masqueraded as a great interest for environmental protection”.

Small-scale fishers from the Amadiba, Cwebe, Hobeni, Port St Johns and Kei Mouth communities, the SWC and All Rise Attorneys for Climate and the Environment, have filed an application for an urgent interdict to immediately halt Shell’s seismic survey. The matter has been set down for Friday at the Makhanda high court before Judge Gerald Bloem.

The Legal Resources Centre and Richard Spoor Attorneys — supported by Cullinan & Associates and Natural Justice — are bringing the application on behalf of the communities.

The case centres on the argument that the seismic survey — which was approved in 2014 and whose right was renewed in 2017 and in 2020 — is unlawful as it does not have a proper environmental authorisation and will cause significant harm to the environment, livelihoods, culture and heritage of communities in the region, particularly small-scale fishers.

Earlier this month, Makhanda high court acting judge Avinash Govindjee dismissed an application for an urgent interdict by the Border Deep Sea Angling Association, Kei Mouth Ski Boat Club, Natural Justice and Greenpeace Africa, who sought to stop the survey from proceeding but failed to convince him that there was a “well-rounded apprehension of irreparable damage to marine life”.

The Amadiba community has had to resist destruction of their land and livelihoods through coastal dune mining for nearly 20 years, said the SWC, adding: “Now they, together with Wild Coast communities further south, must fight to protect the ocean and their ocean-based livelihoods from oil and gas exploration and extraction. SWC stands with these communities as they stand, like David against the Goliath of Shell and the ANC government.”

SWC director Nobuntu Mazeka said: “To stand together against an unholy partnership between transnational corporation Royal Dutch Shell and companies heavily invested in by the ANC is the exact opposite of having a colonial racist agenda. It says instead that we are tired of our government and connected elite conniving with global corporations to irresponsibly exploit what belongs to all South Africans.”

Fellow SWC director Sinegugu Zukulu, said to stand against seismic testing off the Wild Coast without a proper environmental authorisation is to “demand that the most recent research be taken into account before we risk any further damage to ocean ecosystems. It is irresponsible to allow seismic testing to proceed based on outdated information.”

Environmental futurist Professor Nick King, a former SWC director, said opposing Shell’s oil and gas offshore exploration was meant to protect all South Africans from catastrophic climate change. “The International Energy Agency has called for an end to all fossil fuel exploration, stating that we must not extract more than 40% of known oil and gas reserves if we wish to avoid global warming above 1.5°C. Sadly, it is the poor and vulnerable and communities of colour who are and will be hurt most by climate change.”

On Tuesday the traditional fisher communities of Dwesa-Cwebe, Port St John’s and Amadiba wrote an open letter to Mantashe, which was also addressed to environment minister Barbara Creecy, in which they rejected what they called his simplistic dismissal of the resistance to Shell.

“In fact, we are not only resisting Shell but we are saying that we, as black African fishers and ordinary South Africans, have the right to say no to mining of any kind in our region,” they said, adding that seismic testing would adversely affect fish and other marine animals.

“Blaming white environmentalists, to us, is a demonstration of your arrogance and unwillingness to listen to us, the people of the coast — the people of Port St Johns, of Centane, of Dwesa-Cwebe, of Xolobeni, of the Amathole region,” they said.

According to the applicants, the concerns raised by the communities are echoed by local and international experts in the fields of the behavioural and acoustic ecology of marine animals, marine scientists, ichthyologists and fisheries consultants, whose reports have been filed as part of their application.

This includes expert testimony by Dr Jean Harris, Dr Jennifer Olbers and Dr Kendyl Wright, which concluded seismic surveys do cause harm to both species and the ecology, and that significant direct harm to individual animals and to populations of endangered species is the most likely scenario in this case. Of specific concern is the impact on threatened humpback whales and likely mortalities on critically endangered leatherback turtles and endangered loggerhead turtles.

In his answering affidavit, Hloniphizwe Mtolo, the country chair of Shell South Africa, said the seismic survey will not have significant detrimental environmental impacts.

“Numerous seismic surveys have already been conducted safely offshore South Africa without adverse impacts to the environment … The suggestion that the seismic survey is an unprecedented environmental disaster is simply false,” he said.

After more than 50 years of worldwide seismic surveys and more than 15 years of extensive peer-reviewed scientific research, Mtolo said, there remains no evidence that sound from properly mitigated seismic surveys has had any biologically significant impact on any marine populations in areas in which surveys have been conducted: “Despite the hundreds of pages of specialist evidence that the applicants have placed before this court, this fact remains uncontroverted. Moreover, seismic surveys of this nature are standard practice.”

Shell’s survey started on 8 December and is scheduled to run until March/April. “The expert evidence is that commencing now is the most appropriate step to take, from an environmental perspective, to prevent interference with whales during June to November.”

The survey, Mtolo said, is being conducted according to international standards, including additional mitigation measures specific for the area and is being constantly monitored by independent marine mammal observers and passive acoustic monitoring specialists. “Shell has reduced the sound source output to the lowest practically possible. This reduction is observed to be one of the lowest utilised at these water depths in South Africa for seismic surveys.”

If South Africa can find domestic offshore gas, he said, this could play a key part in diversifying its energy portfolio. “Gas is also a strategic bridge to low carbon emission targets and has a key role to play in South Africa’s just energy transition.”

Shell’s position is that an additional environmental authorisation was and is not required. “Shell has in fact gone above and beyond its minimum obligations to ensure compliance with the relevant regulatory framework … The allegations that Shell has not justified its survey from an environmental perspective are simply factually unsustainable,” Mtolo said.

Mantashe, in his opposing affidavit, said the seismic survey is lawful both in terms of the National Environmental Management Act and the Mineral and Petroleum Resources Development Act.