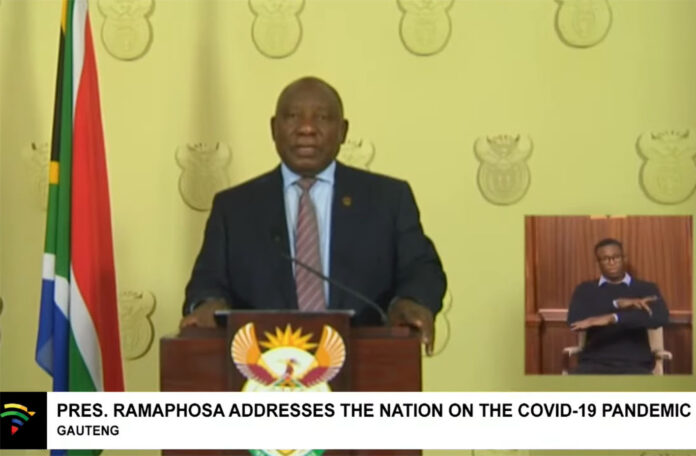 When the president appeared before the nation on Sunday to announce adjusted level-four lockdown, he assumed the shape of a spectral apparition. For the first 10 minutes of his address, the camera operator lacked a bit of focus, and the result was a moving example of form echoing meaning. Because Cyril Ramaphosa has indeed become a blur, politically speaking. He is a hovering flock of loosely acquainted pixels. In his performance of resolve, he visibly lacked resolution.

It can happen to anyone, of course. One minute you’re a fully corporeal being, densely packed and sharp-edged, every molecule of your surface feeling seen, and the next minute you’re just not. You’re vaguely out of sorts. You’re a flickering shadow on Plato’s iPad.

Mistakes happen, but we shouldn’t think too hard about the R750-million or so that we fork out annually to fund the Government Communications and Information Service (GCIS), the august structure that produces these fireside chats. It’s never been cheap to project the government’s utopian vision onto the blank screen of the national mind. There are so many details to think about. For instance, the haunting colour of the backdrop to Cyril’s podium — Plascon’s Custard Corpse? — doesn’t choose itself.

And when focus is lost, you may have to onboard some agile private-sector capacity, as they say, from specialist focus-pullers like Digital Vibes. Such boutique service providers can address the pain points of GCIS’s 431 full-time employees, who pocket an average salary of R670 000 a year. The GCIS might be a shadow parliament of ace propagandists, but they are only human, and sometimes the devastation of the pandemic is just impossible to sex up with only 431 spokespeople.

Since Covid struck, heads of state everywhere have become deranged TV evangelists, selling various mixtures of suffering and fantasy. Most of these miserable bastards rose to power on the tide of their lust for adulation, and now the bill for their vanities has fallen due. They are grimacing national pallbearers, forever caught in the vice grip of the virus.

They hector and they plead; they rage and they bigmansplain. They all want to be President Morgan Freeman in Deep Impact, an implacable national Moses. But they end up as President Jack Nicholson in Mars Attacks, whining in impotent fury at the alien colonists: “Isn’t the universe big enough for all of us?”

The dream is to project a gravitas that painfully few politicians possess in real life. Ramaphosa, as it happens, is one of those few — or was one. In his first two “family meetings”, his adrenaline and ours made his contours sharp; his molecules firmly aligned. And his speechwriters were on fire — inspired to lyrical heights by the surreal grandeur of the crisis. When he fumbled his mask, we loved him for it.

But by the third or fourth family meeting, Oom Cyril was losing his flow, and so were his speechwriters. He stared at the increasingly boilerplate prose on his autocue with barely disguised dismay. The Covid waves kept crashing over us, regardless of whether the curfew started at 9pm or 11pm, whether we were drunk or sober, at school or at home. Many of us stopped watching his speeches at all.

Even the world champions of pandemic leadership are struggling to maintain their heroic outline. Jacinda Ardern seemed to defy the laws of nature by shielding her people from the virus completely. But now the New Zealanders are pissed off with her, because only 8% of the population has been vaccinated. That’s more than twice the progress made in South Africa, but those bratty Kiwis are loudly bemoaning the fate of the other 92% of their Covid-free citizenry. Up in heaven right now, dead New Zealanders are whining about the clouds being too soft and the gates too pearly.

Vladimir Putin, by contrast, doesn’t expect to be loved for his efforts. He projects power and nothing else, and his family-meeting décor would make the GCIS art directors cream themselves. Not for him a Custard Corpse backdrop and two puny flags: he is flanked by six flags, each the height of a bus, and above him on a field of imperial dark blue looms a crest so monstrous it would make Hitler flinch.

Putin uses his rare lectures to command his subjects to line up for Russia’s homegrown vaccines — only 14% of Russians have been immunised. Public trust in Sputnik V, which was rushed to completion by presidential diktat, is understandably scarce. Kremlin health officials also blame a culture of “nihilism”. Putin is not fazed, though. His edges are sharp against the darkness of power.