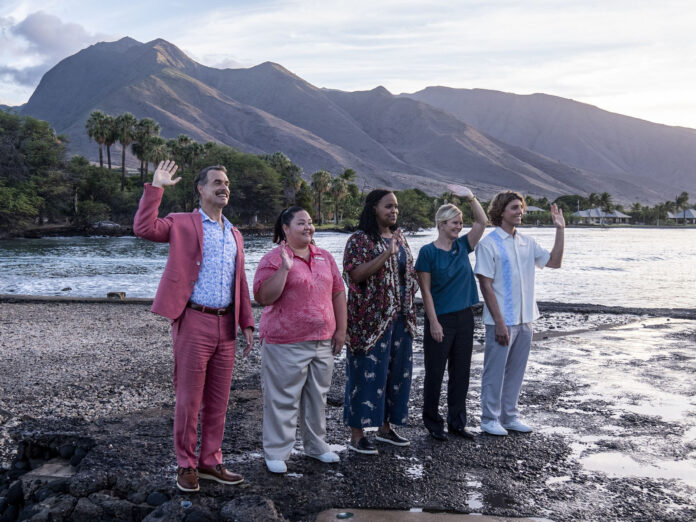 In the excellent The White Lotus, a scabrous comedy drama set on a luxury beachfront hotel in Hawaii, money functions as a numbing psychoactive drug: the lotus fruit of oblivious privilege. It’s not an upper. The stinking-rich guests are as depressed as they are depressing, but the display of their misery is weirdly invigorating. As in Succession, we gawking mortals get some sparkling schadenfreude with our voyeurs’ buffet.

But The White Lotus (now streaming on Showmax) departs from Succession’s  approach to the zoology of wealth by dragging some working people deep into the enclosure. From the moment of a double-booking of the honeymoon suite, a class skirmish kicks off between the guests and the hotel staff forced to lubricate their idleness with a stream of cocktails, massages and rictus grins.

Crucially, the show’s creator-director Mike White steers his wage-earning characters well clear of heroic blandness. In very different ways, the staff are as hapless as their customers. Murray Bartlett shoots the lights out as Armond, the hotel’s junk-haunted trainwreck of an Australian manager. The arrestingly credible Natasha Rothwell is Belinda, a spa manager whose compassion is wasted on her customers. And Kekoa Scott Kekumano is a subtle fulcrum as Kai, a busboy who is steered by his lover (a guest) into choppy waters.

The same kind of three-dimensionality is given to the guests. Only one of them seems irredeemable: the real-estate scion Shane, the sulky, smirky victim of the honeymoon suite mix-up, who cannot let the matter go. Jake Lacy plays him with laudable self-abasement, somehow cramming every rich American dick into the role. Shane is an Everydick, as his new bride Rachel (Alexandra Daddario) discovers to her gradually dawning horror.

In another suite we find Nicole (Connie Britton), a tech tycoon whose spectacularly neurotic family stages an in-house American culture war: she has an anguished Gen X schmo for a husband, a faux-radical harridan for a daughter, a porn-addicted gamer zombie for a son. Along for the ride is her daughter’s black college friend Paula (Brittany O’Grady), who finds herself gaping at the vortex of human clumsiness surrounding her, and rushing headlong toward her own ethical pratfall.

And next door is Tanya (played triumphantly by Jennifer Coolidge) a half-plastic heiress struggling to get rid of her abusive mother’s ashes. She is tormented by her own neediness toward men, and tells Belinda, the spa manager: “I get all afraid, like, you know, how much do I wanna show him? You know, is he gonna be repulsed? Or is he gonna be alarmed? And at the core of the onion, Belinda … is just a straight-up alcoholic lunatic.”

Creator White is very good at obscuring his true intentions and staying off the nose — right up to the complex and ambiguous finale. Throughout the six episodes, the show’s basic coldness and its basic warmth are somehow able to co-exist.

A cable of suspense pulls us onward. At the outset, we are tipped off that somebody is going to die at the White Lotus hotel, but we don’t know who or how. That jangling anxiety is tended by a wonderfully bothersome score by Cristobal Tapia de Veer, whose own name captures his music’s mashup of slightly rotten tropicalia and Hawaiian choral hymns. And we get regular visual breaks from the action to gawk at Pacific swells and breakers remorselessly eroding the island shore. The subtext is clear: this shit ain’t gonna last.