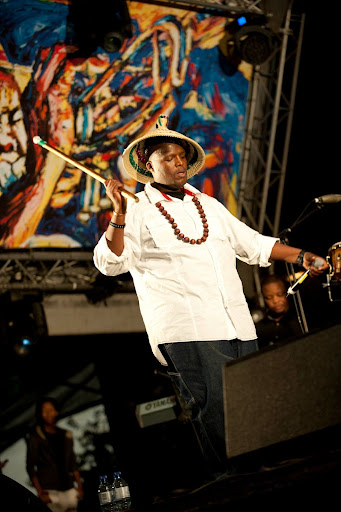 Released 10 years after South Africa’s first democratic elections, Harambe was celebratory — HHP paid homage to the youth of 1976 to whose sacrifices he owes not having to carry a dompas or “call no one a baas”. Declaring himself “not the political type” at the start of the song, HHP ensures Harambe isn’t mistaken for a political statement but is an acknowledgement of the efforts made by ordinary young people and everyone involved in the struggle. As the rapper chants “Harambe” during the hook, Max-Hoba croons the same word, applying melisma to the last syllable for an anthemic feel.

The first song after the intro on HHP’s 2007 album, Acceptance Speech, was indeed an acceptance speech. By 2007, HHP was the biggest hip-hop artist in South Africa. On Thank You Note he expressed his gratitude to Jesus, his family, fellow artists, promoters, radio DJs and fans for each playing their role in orchestrating his prosperity. With a beat built on falsetto horns and a hook that recalls 90s R&B, Thank You Note has grown into a tearjerker after his untimely death.

HHP traced his deep roots and presented them in a joyful tune, as catchy as it is rich both musically and lyrically — keys, guitar licks and a trumpet created a soundscape as layered as the man’s lineage. A montage of insightful vignettes connecting the dots between his forebears, Ancestors showcases the proficiency of HHP’s pen — his storytelling is succinct and his expression emotive, authoritative and accessible.

In 2011, Bosso was one of the first songs to go viral in South Africa. Fans came up with their own definitions of who the bosso was, further boosting the song’s popularity. Many of the catchiest rap hooks in local hip-hop come from motswakolistas, especially HHP and Khuli Chana. The call-and-response hook of Bosso is easily top five — the syllables are few and easy to commit to memory and the lines in the verses are repetitive and easy to recite. Bosso is classic HHP: light-hearted and comical without being corny.

For Music and Lights, HHP stuck to his hit-making formula; a loop of the English disco band Imagination’s 1982 hit was decorated with a selection of percussive contraptions and bolstered by a stronger bassline and drums to bring it into the hip-hop terrain. With half the job done for him, HHP danced over the groovy instrumental, creating a song that rocks the party to this day.

6. Let The Beat Go (featuring Tumi, Zubz and DJ Nana), Dumela, 2009HHP had no qualms about sharing a beat with top-tier lyricists. On his 2009 double album Dumela, he rapped alongside Nas, Naeto C, Nazizi, and of course, Zubz and Tumi, two MCs who were symbolic of lyricism in the 2000s. The three MCs hung out over a sophisticated soundscape containing traces of funk and jazz; the kind of edgy production one had grown to expect from Zubz and Tumi. A masterful display of their skills with evidence of fun being had, Let The Beat Go is a local hip-hop gem that, come to think of it, doesn’t get enough recognition.

HHP introduced a young rapper by the name of Cassper Nyovest, whom he was mentoring, on the cheeky single Wamo Tseba M’Tho from Dumela. An uncompromising kwaito beat, heavy on synths and pads, enabled hip-hop’s veteran pantsula to pass the baton on to the young pantsula ,who would become his successor as the frontrunner of motswako and South African hip-hop as a whole.

One of Thaso’s best productions backed HHP as he sold his hometown Mafikeng (aka Maftown) to anyone who’s not from the province. The listener coasts along to the song’s airy pads that evoke the road trip on which HHP is taking residents from other parts of the country to the beloved Thlabane and Maftown, where “the whole vibe is a turn-on” and his tourists are guaranteed their “best night” as the party never stops.

9. On My Own Remix (featuring Mr Selwyn and Slikour), Omang Reloaded, 2004

Producer Beatmaker is the true star of the show on this remix. Whereas the original On My Own was jazzy, recorded with actual instruments, the remix’s beat consisted of haunting keys and a relatively more defined boom-bap rhythm, ripe for rappity raps, which the three rappers deliver. An ambivalent HHP curses the cliquey and shallow nature of the music industry. Slikour rants about artists receiving the shortest end of the stick, rapping: “Ask these majors about Mahlathini, I bet they will shake/ This shit needs to change, all that’s ours we need to take.” To complete the snapshot of the game in those days is Mr Selwyn who, in his verse, dissects the kwaito-hip-hop rivalry of that era.

After achieving crossover success, Jabba didn’t need to rap competitively. But, being a student of the game and a bonafide hip-hop head, rap’s biggest star sparred with six other MCs — Samba, ProVerb, GC, Straydawg, Mo Molemi and L-Skillz — on Lekoko La Lekoko, the motswako legend’s contribution to the number of memorable posse cuts from the 2000s. The track came with a rare Afrikaans verse from ProVerb alongside a line-up of emerging motswakolistas spazzing over a combative boom bap beat.

One of HHP and his longtime producer Thaso’s finest creations, Tswaka is a glimmering kwaito tune: minimal and pristine yet full, owing to how pronounced each of its elements is. Towards the end of Tswaka, HHP interpolates the hook to kwaito group Trompies’ 2004 hit Bengim’ngaka, a practice that would later define the mid-2010s new-age kwaito sound. He didn’t say it, but he had obviously seen the future. Or, even better, he was creating a future in which many hip-hop artists would prosper.