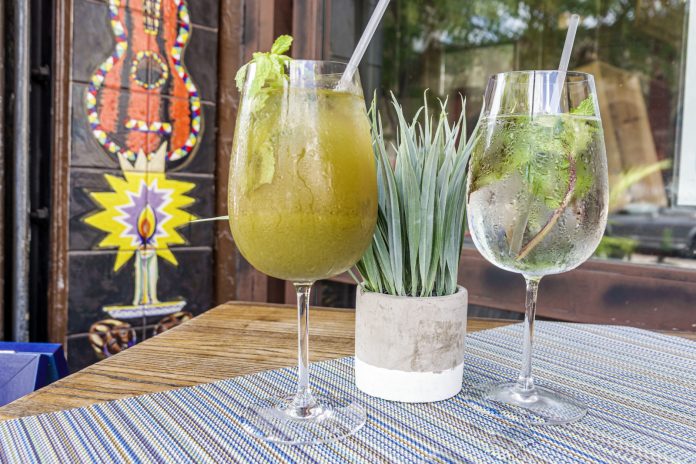 The story goes that the origins of the mojito lie with Cuba and English explorer Sir Francis Drake. The mojito is the cocktail du jour on 11 July: World Mojito Day.

It is one of the most dramatic cocktails one can order – from the complexity of its mix to the theatrics of its preparation.

The Pirates of the Caribbean

Where does one find a stellar mojito? At your local rum bar, of course. In Johannesburg’s bohemian suburb of Melville, Smoking Kills is the five-star dive bar where punks and poets sit together along the rum bar’s counter.

Smoking Kills bartender Aimee May Donofrio prepares a mojito with a little mojo, while sharing the history of the cocktail which allegedly stems from the Caribbean.

“Sir Francis Drakewas sailing through the Caribbean in the 1500s and his ship’s crew got sick, suffering from scurvy, among other illnesses. To treat them, Drake created a concoction of rum, lime, mint leaves and sugar cane juice,” says Donofrio.

This concoction – which came to be known as the “El Draque” after the sea captain – was not random, as each ingredient had a role to play, much like today’s more refined version of the mojito. The lime juice warded off scurvy, mint was for nausea, the rum took the edge off and the sugar cane juice added some sweetness, explains Donofrio.

“A group from the crew set off in search of help when they docked in Cuba and came back to the ship with aguardiente (a type of South American grappa), mint leaves, lime and sugar cane juice, which were swiftly turned into a drink. Shortly afterwards, the El Draque became popular in Cuba.

While serving up the cocktail’s origins, Donofrio pours the rum, which mingles with the crushed ice; it’s hypnotising. She makes use of both white rum from Sugar Barn for sweetness and a darker spiced rum for complexity and nuttiness. Instead of using a muddler, Donofrio squeezes the juice of fresh limes into the glass. Her mojito comes with a bunch of mint leaves to perfume the top of the drink.

It is evident fresh mint and limes are key here, in addition to how you garnish the drink. Sitting at the bar, where you can see your drink being made, plays a role in enjoying a mojito – there’s an element of drama and theatre when you see the bartender making the drink.

The whole bar comes to pay their photographic dues and snap Donofrio’s Cuban creation, which does more than justice to the classic.

A fine balance of flavours

The mojito is one of the most labour-intensive, classic cocktails to make. It is definitely a labour of love, says Caitlyn Hill, professional bartender and ambassador for Rémy Cointreau. Every bartender has a different approach to crafting cocktails, especially when it comes to the classics or a signature drink.

“Because it’s so labour intensive, most bartenders do not enjoy making it, despite how tasty

it can be. Things can go wrong so quickly – at the end of the day, the most important thing when making any drink/cocktail is to use good quality ingredients – that comes down to the fresh items (in this instance limes and mint), the ice, the spirits – and the tools needed,” says Hill.

In contrast to Donofrio’s approach to crafting her mojito, which favours local favourites, Hill’s mojito with a twist makes use of a specialty from Rémy Cointreau, their Mount Gay Eclipse Rum, which, unfortunately, you can’t get in South Africa.

“I approach with the Mount Gay Eclipse Rum, add a dash of Cointreau to take the citrus element

of the drink up a little bit. However, I’d also look at using a more non-traditional spirit such as Octomore whisky – it’s a super-peated Islay single malt, which would complement the lime and mint elements of a mojito in a really cool and different way,” says Hill.

Bartending is a craft and there are traditional ways of doing things. Each bartender picks up different habits and techniques from mentors and other people they work with, introducing their own twists and quirks into the flavours and theatricality of a drink.

“The first bar I ever worked at used a tin cup, that essentially was a spice shaker – like those we see at the cinema for popcorn flavours – for the mojito,” says Hill. “I think that having a raw material such as that impacts the taste and the cooling effect of the drink. So, it may not be traditional as such for a mojito, but it’s traditional for me,” she adds.

Even the sugar has an impact on the final taste of the Cuban-inspired cocktail. Playing with different types of sugar, and using it in crystal form versus a syrup, is important because it has an effect on the texture and taste of the drink, explains Hill.

Mojito’s can be enjoyed in the day, poolside, or later with dinner. But, at the end of the day, or the evening, all the drink’s elements are important.

“Remember, we taste with our eyes first, whether that’s watching the drink being made or delivered to where you are sitting, and how it looks, then potentially touch and aroma,” says Hill.