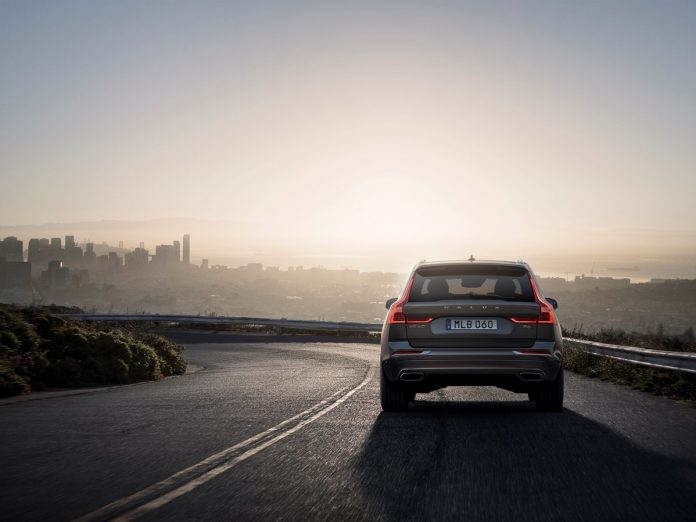 Most Volvos carry an inherent contradiction.

One one hand the Swedes have an insistence on doing things their own way; they’re not  afraid to do anything remarkably different to the innumerable German, American and Asians vehicles on the road.

And yet, given its unshakeable reputation as the quintessential safe family car, Volvos often feel prosaic. Stability is precisely the point but nonetheless leaves the enthusiast’s appetite unsated.

The XC60 that showed up at our doorstep felt like an attempt to merge those opposing forces.

In solid metallic black it looked supremely cool. With dark finishings inside and leather seats, stepping through its doors felt a bit like getting into something Bruce Wayne might drive. A perception which is immediately enhanced when the gauge cluster — which is looking increasingly excellent in these cars —  fires up. The B6 also has more supercharged punch than the model beneath it in the range.

READ MORE: Guest Column: Why did Volvo decide to team up with Google?

But there was a particular reason the SUV’s masters wanted to show this one off. The (minor) facelifted XC60s that arrived in this country a few months ago are some of the first to carry the new Android infotainment system that the Swedes have set up. In the recent past they became the first to offer full Google integration which sets up native use of its apps.

How is this different from Android Auto running in your friend’s Volkswagen Polo? Well, there are a few key differences.

The most obvious is that you don’t have to connect your phone. Rather, the setup uses its own internet connection and prompts you to set up a profile — or link an existing Google account. With your profile making permanent camp in the vehicle, it is able to not only remember your preferences but also interact with your applications. When the need for a service arrives, for instance, the appointment will be seamlessly slotted into your calendar.

Another notable feature is the ability to control your Volvo’s functions with Google Assistant. Unlike Android Auto and Apple CarPlay, this would include verbally asking the climate control to take it easy.

Is it any good?

That probably depends on one’s proclivity to muck about and tinker with the optimised apps. If you’re the type to do so you’ll find something to love here.

If not, it can feel like a needlessly frustrating experience.

The menu layout is unintuitive, taking a good few go’s to mentally plot out. After a few even the more tech-inclined might start to feel uncomfortably geriatric.

Something as rudimentary as Bluetooth listening is made complicated; regularly disconnecting and providing a feature-sparse player. It feels as though the system is deliberately offering frustration so as to offer salvation in the form of onboard apps like Spotify.

Even if we move past those issues there’s still the elephant sitting in the parking lot. In 2022, when the previously mentioned car apps are better than ever, do we really need this?

The beauty of both the Android and Apple offerings is that these days they can replace the interface of almost anything on four wheels. R3-million BMW or bottom-of-the-line cheapo, chances are that you’re connecting your phone for the uniform experience.

Yes, the native Google Maps is excellent in the Volvo. But are you missing anything by using Maps or Waze on the others? Not really. In fact, given that CarPlay was only promised in later 2022, Apple users might argue that this constitutes a downgrade for them.

We’re in the nascency of this technology. The engineers will no doubt streamline it and you wouldn’t bet against Volvo having the last laugh when they get it right. But for now that can only be a consolation.

These clunky innovations are a shame because they detract from an otherwise solid product. Let’s remember that the XC60 is an SUV that’s easy to embrace — and hard to fault in most areas. The current iteration of the facelift is no different.

Stylish, smooth inside and out, it’s just what you would expect from a brand synonymous with consistency. The infotainment system aside, the cockpit is beginning to look increasingly sexy. This is most noticeable in the gauge cluster, which adopts a dark aesthetic which can give the pleasing illusion of clouds engulfing the rev meter and speedometer. It resembles the theme BMW has offered in recent years but possibly even improved upon.

The B6 is driven by a supercharged 2.0 engine which provides some decent nip at this size. Steering is immaculate and the overall driving experience tranquil — Volvo aficionados will know easy it is to lose track of your speed while in an effortless cruise. Of course you will go no higher than 180km/h; that being the electronic limit of everything coming out of the manufacturer’s factory.

To repeat it for the last time: it’s everything you might expect from a Volvo. Which, make no mistake, is a good thing. A lot of effort has been put into crafting a steady state of harmony across anything that has its badge slapped on. Perhaps, like the studious A+ overachiever who cheated on a test just that one time, Volvo wanted a break from the routine. That’s the best explanation for their Google fling.

BMW i4 M50 and iX3 officially in South Africa

Heated seats in your BMW? That’ll be R250 a month extra