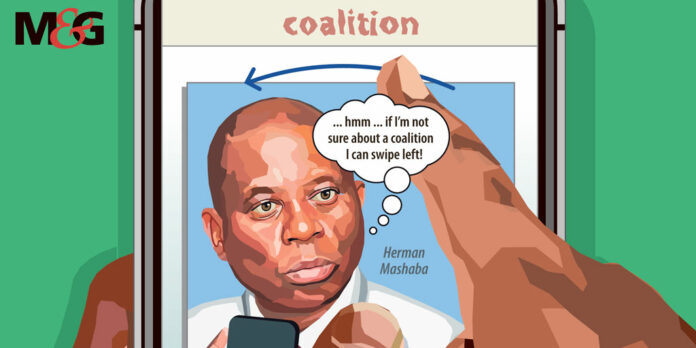 ActionSA leader Herman Mashaba has given the ANC the cold shoulder, telling the top six, who informally attempted to entice him into coalition talks after this week’s local government elections, “Don’t call me, I’ll call you.”

Mashaba revealed this to journalists during an impromptu media briefing in Tshwane at the Electoral Commission of South Africa (IEC) results centre.

“It was one of the top six: it was informal. I was not prepared to entertain that discussion,” he said.

Speaking to the media shortly after Mashaba’s media briefing, DA leader John Steenhuisen said although the party was willing to go into a coalition with ActionSA, it would not be willing to elect Mashaba as mayor.

Mashaba said his party’s senate — its highest decision-making body — had decided to deploy its provincial heavyweights to negotiate with other political parties during coalition talks.

The party would run a 48-hour poll in all municipalities in which it had voter presence so that people could decide which party it should entertain during coalition arrangements, he added.

Mashaba said that ActionSA was also open to a coalition with the Democratic Alliance, but had not yet been approached by its leaders.

“If you want to talk to us around the coalition, you must understand that social justice is one of the non-negotiables,” he said.

“We can’t take votes from people like we own them and do what we like with them. Those votes don’t belong to us: they belong to the people … It won’t be just ActionSA voters, but all residents of that municipality. We serve all residents,” he said.

Beaumont said the party had already begun to draft a written, co-defined, coalition agreement that “must determine how political parties will work, the rules of engagement and, very importantly, how we are going to serve the residents of that municipality”.

Another stipulation is that people implicated in allegations of corruption must be investigated — including members of ActionSA.

“You cannot stand against corruption, but you turn a blind eye to allegations that might have happened to people you are going to be co-governing with for the next five years,” Beaumont said.

At about 2pm on Wednesday, projections from the Council for Scientific and Industrial Research (CSIR) indicated that ActionSA had garnered about 13.6% of votes in Johannesburg, behind the ANC at about 34.4% and the DA with about 28.8%.

Covid-19 figures have never captured the full extent of the pandemic, and the numbers are becoming less useful because fewer people are testing
Advertising