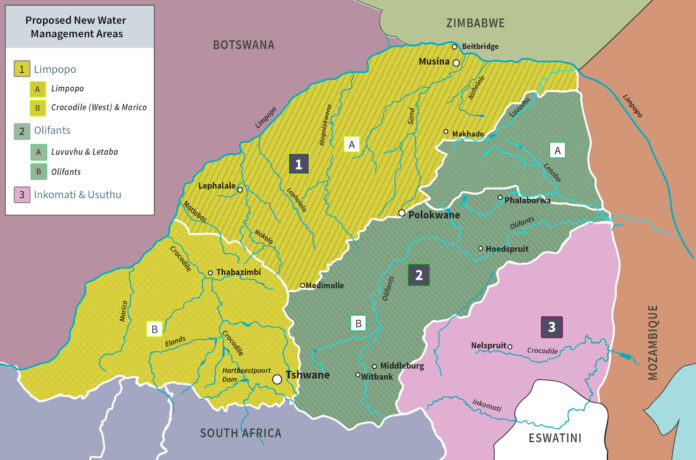 The Musina Makhado Special Economic Zone (MMSEZ) plans do not fit into South Africa’s energy, Just Transition or water planning, and do not respect local residents’ wishes or the biodiversity in the area, said Dr Victor Munnik when presenting his research. With the announcement from China that it would no longer support overseas coal projects, the prospects for this megaproject are fast diminishing.

At a webinar held on Monday, convened by the Friedrich-Ebert-Stiftung (FES), conflicting views were expressed in the discussion of the latest report by Dr Munnik, of the Society Work and Politics Institute at Wits University, titled: Water for the EMSEZ mega-project at all costs — a report on the absence of water governance in the Limpopo River Catchment.

The CEO of the Musina-Makhado Special Economic Zone (MMSEZ) State-Owned Corporation (SOC), Lehlogonolo Masoga of the Limpopo Economic Development Agency (LEDA), faced a barrage of questions from animated panelists, while the Department of Water and Sanitation remained silent. The webinar was recorded and can be accessed via www.fes-southafrica.org

In welcoming participants Uta Dirksen, the FES South Africa country representative, referred to the social democratic principles that guide the FES and noted the relevance of the research under several of the foundation’s thematic work areas, particularly on Just and Sustainable Socio-Economic Transformation, which addresses the urgent need both to mitigate and to adapt to climate change and involves supporting alliances for a just transition at global as well as local levels.

Munnik reviewed findings of last year’s report looking into anticipated water supply and demand in northern Limpopo, in the context of an Environmental Impact Assessment (EIA) process for the proposed southern site of the MMSEZ, which recently published a final EIA Report for public comment by 12 October 2021. Projected water demand for the proposed minerals beneficiation industries, of 80 million cubic metres per annum, prompted this further research into the status of implementation of legislation on water governance.

Munnik characterised the “Electro-Metallurgical” component of the SEZ as a “late coal project”, as it flies in the face of South Africa’s commitment on climate change, to achieve net zero carbon emissions by 2050. This is not changed by the latest MMSEZ revisions that reduce the size of the coal-fired power plant and shift some of the industry, inlcuding a cement plant, away from the southern site.

Munnik welcomed a commitment by the Department of Water and Sanitation (DWS) to initiate a Catchment Management Agency (CMA) that will bring together the Limpopo and Olifants catchments, as this would enable citizens to participate in water governance. This is part of a recent consolidation, with South Africa divided into only six catchment management areas, from a previous 21. Urgency to fill the governance vacuum is proven by the broad alliance of objectors to the MMSEZ that have come together to defend water resources for agriculture, local stakeholders and biodiversity.

Regarding a proposed new “Musina Dam”, for storing floodwater from the Limpopo River to be extracted at a weir downstream of Beitbridge, from Munnik’s research it appears that this is not being considered by the DWS, at least not with any public notification or participation, nor in any deliberations with the three other Limpopo riparian states Botswana, Zimbabwe and Mozambique. He questioned why the dam option was not included in the EIA Report and noted major shortcomings in the Pre-Feasibility Study released by LEDA, as identified by the respected water engineer Abri Vermeulen in an independent review, incorporated in the latest research.

The first panelist was Derek du Toit, of the Association for Water and Rural Development (AWARD), worried that the MMSEZ is proceeding “outside” of CMA jurisdiction. Responsible spatial planning for the megaproject is another concern and he questioned why such important decisions are in the hands of provincial rather than national authorities, particularly when the provincial government is championing the development. He questioned the number of jobs being promised and cautioned that due to inadequate assessment, the greatest costs may fall on those impacted by MMSEZ, rather than the promoters.

Deirdre Carter, chief executive of Agri-Limpopo, said South Africa is already water scarce, particularly in northern Limpopo, where available water is already fully allocated, thus characterised as a “closed catchment”. She highlighted the failure to establish CMAs as required by the Water Act of 1998 and declared that the EIA studies on how the MMSEZ will affect groundwater, underground water and agriculture in the area are clearly inadequate. Carter noted that views on how power should be generated have shifted in the context of accelerating climate change — as evidenced in China’s latest announcement it will no longer finance coal projects internationally — and asserted that agriculture is the most sustainable option for the Limpopo and Olifants River areas, concluding: “No amount of hammering will fit this square into any circle.”

Masoga premised his response with appreciation for the invitation to this engagement and asserted the need for development as the Limpopo provincial government’s overriding imperative. He said South Africa has a duty to grow its economy and improve the plight of the poor, and this requires industrialisation and taking advantage of available opportunities. Masoga said the MMSEZ was conceptualised for this purpose, noting: “I am aware of the concerns raised regarding the environment. We are playing by the rules and have never refused to listen to these concerns.”

He acknowledged that additional water resources need to be found for the MMSEZ and that more than 20 studies on potential impacts have been carried out. The idea is not to strain the water resources in the area, but to use flood water from the Limpopo River as a new, additional resource. He noted that operations in the special economic zone focus on beneficiation and will be above-ground, thus posing no threat to groundwater. “We wish to upgrade the lives of people in the area and create jobs. We will take Professor Munnik’s study findings into consideration,” he said.

Mphatheleni Makaulele spoke as leader of the indigenous-community-based organisation Dzomo La Mupo, saying they had not experienced meaningful consultation on the proposed development or on planning water usage in the area. She noted that the Heritage Act provides protection for local communities, as it recognises that some water catchment areas and forests are sacred for the Vhembe, who regard water as sacred. Calling for recognition of traditional values including respect for nature, Makaulele observed that the rivers in the area and their tributaries are already running dry, in particular the Nzhelele and Luvuvhu, which indicates how badly the MMSEZ could affect the health of land and water and people.

Martha Komape, an official of DWS, said she was not authorised to make a presentation or answer questions, but was attending to listen and would follow up on questions to her department, to get a response. The FES programme manager intervened to note that Komape had sincerely assisted their efforts to secure a DWS panelist with a mandate to engage on the issues, and that he will send a follow-up letter to senior officials that will include the questions raised in the webinar. Additional questions may be submitted to: [email protected]

Concerns raised in the Q&A window included the troubled history of the government’s management of mega-developments, varying accounts of the numbers of jobs being promised and failure to address the cumulative effects of the MMSEZ project.

Masoga responded on the issue of mega-developments that he and his colleagues were learning and drawing from models from other countries. “It is high time that beneficiation took place in South Africa, instead of exporting raw products,” he said. On the issue of jobs, he said similar projects were being examined for job projections and tens of thousands of jobs should be created by the MMSEZ, but he did not specify the current official projection.

Regarding cumulative effects of the MMSEZ project, Masoga said many studies had been carried out in the course of this initial EIA and are included in the Report. He said new sources of water will have to be exploited, potentially including water from Zimbabwe.

Carter said that there had been no consultation with farmers organisations in the area and that no adequate studies had been released to the public on the MMSEZ’s potential effect on the water table or on food security.

Makaulele said the MMSEZ southern site is home to sacred sites, ancestral graves and a wide diversity of nature. She reiterated that proper consultation was not done with local residents.

Masogo disagreed, saying “extensive consultations” had been carried out, with five rounds of public participation and that all the studies are available. The water resources they secured would be shared and would benefit agriculture. He said alternative forms of generating electricity were being examined, and if coal was used, the best technologies would be employed to minimise its harmful impacts.

Du Toit observed that the assessments of water availability in the Limpopo River factor in floods, questioning the notion of new resources being available. He pointed out that ecosystems and water catchments rely on occasional floods, for example with flood spikes cleaning out silt and resetting the ecosystem, so extracting flood waters would impact on water security and compromise current users.

In response to a question about the integrity of a key driver of investment in the zone — the CEO of company licensed to operate the SEZ, Mr Ning Yat Hoi, who is allegedly involved in mining fraud in Zimbabwe — Masoga said he was aware of these allegations arising from differences amongst business partners, that due diligence has been carried out, and that he does not believe that this is a problem for the MMSEZ.

Munnik flagged three further issues of concern: in the EIA Report a 6000 hectare portion of land outside the MMSEZ site has been mapped for waste management, confirming there is likely to be far more waste generated such as ash heaps than the designated area could handle; no consultations with people in the area had been initiated regarding the dam proposals; major risk to existing water users: if the heavy industry MMSEZ proceeds, based on water from a dam that would take at best eight to 10 years to build, or speculative sources in Zimbabwe, what will happen if new water infrastructure or the anticipated floods fail to arrive? “I am not convinced that these ‘solutions’ will stand up to proper scientific scrutiny,” he said.

In his concluding remarks Masoga said that South Africa’s and our region’s development and would result in roads and water resources for people in the area. He said the flood water plans had been put together by a team of experts and were available for Munnik to examine. He reaffirmed a commitment to working in the interests of the people.