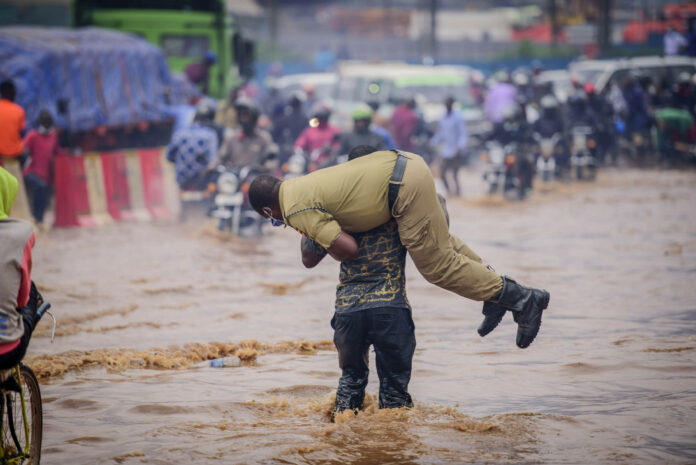 Nicholas Bamulanzeki, a photojournalist, was sitting in his office on the fifth floor of a tower block overlooking the Queen’s Clock Tower roundabout in Kampala. Usually, the busy intersection is awash with traffic, but on this early September day it was submerged under several feet of water. The capital had been struck by torrential rains, and this area is notorious for its poor drainage.

Bamulanzeki watched as cars struggled to make their way through the flood. “I said, ‘No, I must go down and take some pictures; you never know what I might get!’” he told the Mail & Guardian. He grabbed his camera, put on his gumboots and raincoat, and made his way downstairs.

There he found cars and boda bodas (motorcycle taxis) struggling through the water. Enterprising young men were offering to carry pedestrians on their backs from one side to the other, for a fee, in Ugandan shillings, of between R13 and R22.

Bamulanzeki noticed a policeman entering these negotiations. He appeared desperate to get to the other side. After agreeing to a fee, a young man hoisted the policeman onto his shoulders and began trudging through the flood. “I aimed my camera at him and took the shot,” said Bamulanzeki. He was careful to make sure the policeman’s face was not visible. “I was in the right place at the right time. Though the policeman seemed heavy, the man who carried him did it seamlessly.”

Bamulanzeki knew immediately that he had taken an iconic photograph. “In normal circumstances, it’s the police guy supposed to help, but this time the ordinary citizen was offering help.” After taking a few more shots, he removed the memory card and tucked it in his pocket — just in case anyone stole his camera.

Later, when he uploaded the photo to social media, Bamulanzeki was overwhelmed at the responses. “They say one picture is worth a thousand words, but I think this picture has gone more viral,” he said.

It even caught the attention of opposition leader Kizza Besigye, who dubbed it “picture of the week” and tweeted: “Clearly shows a reversal of roles in Uganda. What should be (disciplined) uniformed SERVANTS turned into a LOAD of MASTERS, heavily weighing down their malnourished servants/citizens”.

“This picture is powerful, it shows that the common Ugandan is stronger than police”, added Olivia Musigo, a human resources consultant. Kizza Godfrey, medical laboratory technologist, said that “next day this officer will be beating that guy”.

Bamulanzeki said he would leave the interpretation of the photograph to others. “Some said that I am anti-government, but I was only doing my job.”

The story first appeared in The Continent, the pan-African weekly newspaper designed to be read and shared on WhatsApp.

The Kabaka of Buganda’s fleet of Rolls-Royces was seized in a coup nearly 60 years ago. Now his successor has brought the only known ‘survivor’ home
Read more
Environment

Museveni isn’t worried about winning the election, but about what comes next

Uganda’s president is likely to win the next election. But Bobi Wine’s constituency poses the most serious threat yet to his continued rule
Read more
Africa

COMMENT: For all Bobi Wine’s evident popularity, it remains to be seen if he can build a political machine capable of posing a serious threat to Uganda’s president
Read more
Opinion

A fortnight after an early winter downpour, a recently established informal settlement comes to terms with the Cape’s hydromorphology of seasonal floodplains.
Read more
Advertising