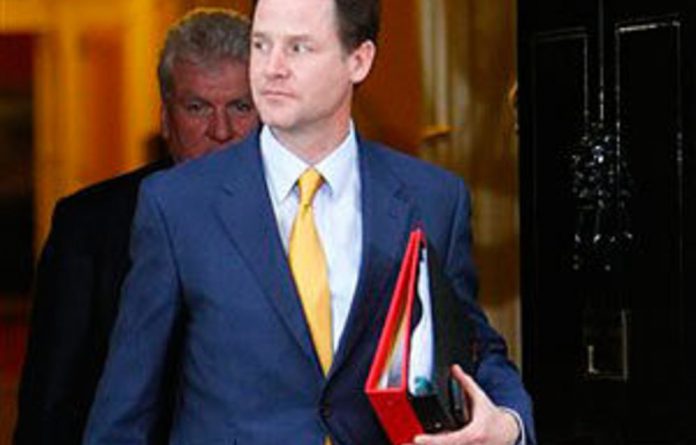 Britain’s new premier, David Cameron, has vowed a “seismic shift” in how the country is governed, unveiling a historic coalition he said would transform the political landscape.

A day after taking office in Britain’s first power-sharing government since World War II, Cameron said on Wednesday his Conservative Party and its Liberal Democrat partners considered a record deficit as their “most urgent issue”.

The detailed joint policy programme published by Cameron — Britain’s youngest prime minister for two centuries — included a pledge not to join the euro and confirmed plans for a fixed five-year term for British parliaments.

“We are announcing a new politics, a new politics where the national interest is more important than the party interest,” he said in an open-air press conference with Lib Dem leader Nick Clegg, his deputy.

In Downing Street’s leafy garden — a striking contrast to his predecessor Gordon Brown’s monthly indoor press conferences — Cameron added: “It can be an historic and seismic shift in our political leadership.

“Our liberal-conservative government will take Britain in an historic new direction,” he said.

The 43-year-old got down to work in Downing Street after striking a post-election deal with the Liberal Democrats late on Tuesday.

He was set to chair the first meeting of his new Cabinet on Thursday and would also name the middle-ranking and junior roles in his administration.

Cameron — who has pulled the party once led by Margaret Thatcher closer to the centre ground — named Clegg and four other members of the centrist party in his Cabinet.

Key points of the seven-page coalition accord included:

Earlier, new Foreign Secretary William Hague insisted the coalition agreement, forged in five days of talks after an inconclusive May 6 election produced the first hung Parliament since 1974, would stand the test of time.

“I don’t think it will be a weak coalition. It will be a strong government,” said Hague, adding that the conflict in Afghanistan — where Britain has about 10 000 troops — would be his “most urgent priority”.

New Finance Minister George Osborne added: “Now’s the time to roll up the sleeves, and get Britain working.”

‘Smart, dedicated and effective‘
London’s stock market and the pound recovered after a jittery few days ended with Tuesday’s deal, although the currency later gave up early gains.

Britain’s deficit stands at £163,4-billion, or 11,6% of gross domestic product — the highest level since World War II. It emerged from recession at the end of last year.

Cameron was asked to form a government by Queen Elizabeth II late on Tuesday after Brown resigned.

The race to be the Labour Party’s next leader got under way on Wednesday, with former foreign secretary David Miliband the first to throw his hat into the ring.

United States President Barack Obama called Cameron within minutes of his appointment, inviting him to visit in July, Downing Street said — and on Wednesday the US leader called the British premier a “smart, dedicated [and] effective” leader.

Hague will travel to Washington, DC, on Friday for talks with US Secretary of State Hillary Clinton, both sides said.

Chinese Premier Wen Jiabao and Indian Prime Minister Manmohan Singh talked to Cameron, with Singh inviting him for an “early” visit to Delhi.

Critics say the deal between the centre-right Conservatives and centrist Lib Dems is an unlikely alliance, since they have strongly differing views on a number of issues.

But between them, they have enough seats to secure a majority in the House of Commons, which Labour and the Lib Dems, seen as more natural bedfellows, did not, although they held talks. — AFP