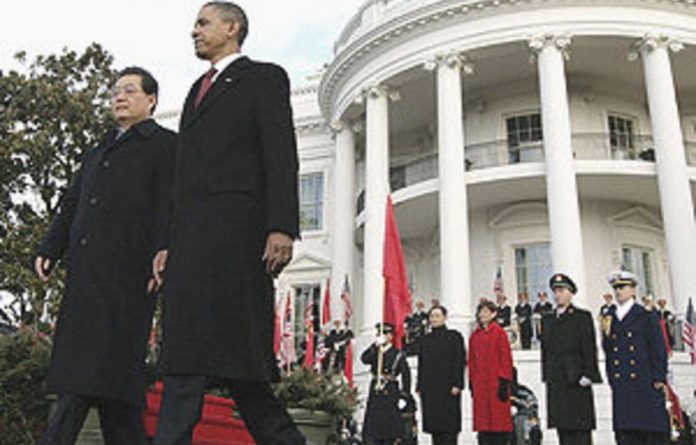 The last time Hu Jintao arrived in Washington, back in 2006, he was given a White House working lunch and by all accounts never forgave former United States president George W Bush for the perceived insult.

By contrast, it is highly unlikely that China’s president could find fault with the welcome laid out by the Obama administration — a private White House dinner to be followed later in the week by a full state banquet, a 21-gun salute and all the pomp and circumstance of a review of the troops.

The message is absolutely clear — these are the world’s two leading powers, meeting as equals. It is that sense of equal status that distinguishes this Washington summit from earlier such encounters.

In terms of absolute size China’s economy is catching up fast with America’s and, according to data compiled by the University of Pennsylvania, may even have overtaken that of the US at some point in the past year.

Militarily, the People’s Liberation Army (PLA) is the biggest on Earth — 2,2-million soldiers compared with the 1,6-million of the US armed forces. On the global stage China has also become a giant, lending more to developing countries in the past two years than even the World Bank, according to the Financial Times.

But those big figures can be misleading. America is a rich country, while most of China is still grindingly poor. “The development of our own country remains our top priority,” China’s ambassador to London, Liu Xiaoming, said. “In terms of per capita GDP we are still behind more than 100 countries.”

Better equipped
When it comes to military might, too, there is no doubt that US forces are far better equipped, better trained and more powerful than the PLA. By that ultimate yardstick of superpower status, nuclear weapons, the US far outstrips China. America is estimated to have more than 9 000 warheads, deployed or stockpiled. China has about 240.

What puts China on an equal footing with the US, however, is its dynamism. As Obama and Hu meet in Washington, it is the Chinese leader who can realistically claim to have the wind in his sails.

In the aftermath of the Iraq invasion and the global economic recession the US democratic-capitalist model no longer appears to be such an inevitable global template.

America is recovering and its economy grew by 3% last year and will probably do the same in 2011. But China’s grew by 10% and will slow only marginally this year.

While the American administration wrestles with a growing debt burden, made worse by a huge balance of payments deficit China’s trade surplus in 2010 was $183-billion, much of it with the US. In the first half of 2010 it enjoyed a $145-billion budget surplus.

The accumulation of vast wealth from selling electrical and electronics goods to the rest of the world has, until recently, been used to buy US government bonds, with the effect of supporting Washington’s need to borrow.

Changing the landscape
Elizabeth Economy, the director of Asia studies at Washington’s Council on Foreign Relations, said: “I think we have a fundamentally different position from 13 years ago. The global financial crisis has changed the landscape with regard to China’s economy relative to the US. China has a global reach in investments and resources and China’s military is fundamentally different.

“The rise of China has progressed to a degree that none of us appreciated 13 years ago,” Economy said. One of the most remarkable aspects of this was the idea of a Chinese president coming to Washington to discuss the dollar with the US president, she said.

China’s inferiority in “hard power”, meanwhile, has turned to Beijing’s advantage. It is benefiting from being the country that did not invade Iraq and is not currently bogged down in Afghanistan.

After the Bush experiment in exporting democracy militarily, China’s mantra of non-interference in the affairs of other states seems benign by comparison, particularly in the developing world, where Chinese “soft power” has expanded dramatically.

Chinese forces have not fought any wars in recent decades and have not occupied foreign territory, but China is currently the biggest contributor to UN peacekeeping forces.

Signs of China’s rising soft power abound. The Wall Street Journal estimated that there are 100-million people around the world learning Mandarin and other Chinese languages. Chinese diplomatic missions are springing up over the globe and it is catching up with the US state department. China now has 251 embassies, consulates and missions, compared with America’s 289.

It is China’s trajectory then, rather than its current power, that gives it superpower status. Pundits regularly talk about the 21st century as being the Chinese century, following the very American 20th century.

The great unknown underlying all these predictions, however, is whether that trajectory is sustainable over the decades to come. The rise of China may yet hit the limits set by the environment. It has the misfortune of industrialising at a time of global warming.

It is also far from clear whether the Chinese state capitalist model, which has proved so successful for the country’s development, can support a sophisticated post-industrial society or whether democracy has long-term advantages that will be felt in the later stages of the great US-China race. — Guardian News & Media 2011