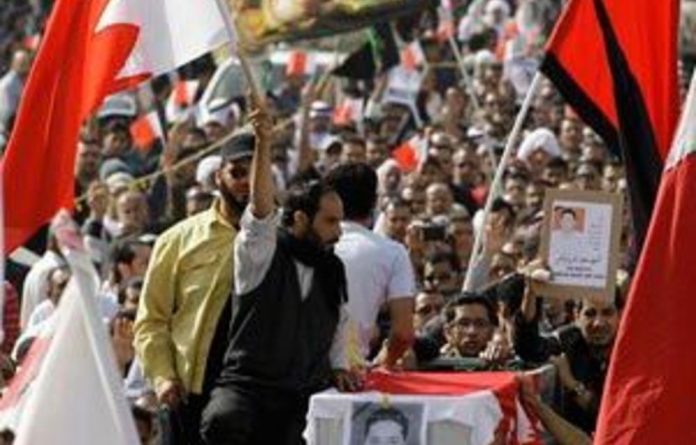 Several thousand Shi’ites turned out in Bahrain on Friday to bury three of those killed in a crackdown ordered by the island state’s Sunni ruling family to quell opposition protests inspired by Egypt.

Four protesters were killed and 231 wounded when riot police drove activists from a makeshift camp in Pearl Square in Manama, the capital, on Thursday. Dozens were detained.

Bahrain’s most revered Shi’ite cleric, Sheikh Issa Qassem, described the police attack as a “massacre” and said the government had shut the door to dialogue, but stopped short of calling openly for street protests.

Qassem spoke to thousands gathered for Friday prayers at a mosque in a Shi’ite village in the north-west of the island.

The mostly Shi’ite protesters had hoped to turn Pearl Square into a base modelled on Cairo’s Tahrir Square, fulcrum of the popular revolt that toppled Egyptian President Hosni Mubarak.

Several thousand Shi’ites joined funeral processions in the village of Sitra, south of Manama, for three of the dead.

“The people want the fall of the regime,” they cried.

Police stayed away, although a helicopter circled overhead. On Tuesday, one protester was killed at the funeral of another.

In a loyalist demonstration in Manama, hundreds of pro-government supporters, waving flags and pictures of the king, streamed through the streets of Bahrain’s capital, footage from local TV showed.

Dozens of cars plastered with the red and white Bahraini flag drove towards Fateh Mosque, the capital’s largest. One flag was emblazoned with “Hamad”, the name of the king.

Several police cars were parked outside the mosque.

Inside the Sitra mosque, men washed the body of 22-year-old student Mahmoud Abu Taki, who was peppered with buckshot.

“This is a failed government,” said Abu Taki, a real estate company manager. “Of course the protests will continue. The government here is like people of the jungle.”

The bodies of his son and of Ali Mansour Khudeir (58) were then draped in red and white Bahraini flags and placed on top of two vehicles which drove slowly through the streets.

Anti-government chants
“Trial, trial for the criminal gang,” the crowd shouted. “Justice, freedom and constitutional monarchy.” A brief attempt to start a chant of “Death to al-Khalifa” fizzled.

The Gulf Arab state is allied to the US and Saudi Arabia, which see it as an outpost against Shi’ite Iran.

The US Navy’s Fifth Fleet, which projects US military power across the Middle East and Central Asia, including Iraq and Afghanistan, is based near Manama.

US Secretary of State Hillary Clinton urged Bahrain on Thursday to use restraint and to keep its promise “to hold accountable those who have used excessive force”.

The unrest in Bahrain, a regional banking hub and a minor oil producer, has shaken foreign confidence in the economy.

The cost of insuring Bahraini sovereign debt against default for five years hit fresh 18-month highs, with the instrument quoted at 300 basis points, up 19 from Thursday’s close.

Bahraini Foreign Minister Sheikh Khaled bin Ahmed al-Khalifa said the police action was necessary because his country had been on the “brink of a sectarian abyss”.

But Hassan Radi (64) a lawyer in Sitra, contested that.

“Nobody wants to be sectarian, but the people are forced into it when they are discriminated against. No jobs, no respect, this is obvious,” he said outside the mosque.

“What they are demanding is … a modern state with a real democratic constitution that ensures their rights and equality.”

A decade ago King Hamad bin Isa al-Khalifa enacted a constitution allowing elections for a Parliament with some powers, but royals still dominate a cabinet led by the king’s uncle who has been prime minister for 40 years. Shi’ites, in particular, feel excluded from decision-making.

Ibrahim Mattar, a lawmaker from the main Shi’ite bloc Wefaq, whose 17 members resigned from the 40-seat assembly on Thursday, said the number of missing after the police attack on protesters sleeping in Pearl Square had shrunk to 11.

“We aren’t sure where they are, maybe hidden in buildings, maybe in prison,” he said, adding that no children were among them. Wefaq MPs said on Thursday about 60 people were missing.

Another Wefaq MP, Jalal Fairooz, said protests were now out of the hands of political parties. “All the masses are full of anger and fear. They are not against the king or the ruling family, but they want an elected government,” he said.

Justice and Islamic Affairs Minister Sheikh Khaled bin Ali al-Khalifa said it was important for the Wefaq bloc to stay in parliament to “push the democratic process forward”.

Britain’s foreign minister said the 1999 constitutional reforms should go on, with a dialogue between government and opposition that “ought to lead to further reforms in the political system and responding to legitimate grievances”.

“It will be difficult for foreign countries to lay down the details of that since it’s clearly a matter that needs to be discussed within Bahrain,” William Hague told the BBC.

Saudi Arabia fears unrest spreading to its own Shi’ite community, a minority there but concentrated in the eastern oil-producing area of the world’s top crude exporter.

Gulf Arab foreign ministers meeting in Manama on Thursday stressed their solidarity and support for Bahrain “politically and economically as well as militarily and defensively”.

The six-nation Gulf Cooperation Council also said it would not accept foreign intervention in Bahrain’s affairs.

Unrest which toppled the long-serving leaders of Egypt and Tunisia in recent weeks has spread across the Arab world. This week has seen deadly protests in Libya, Yemen and Iraq. – Reuters