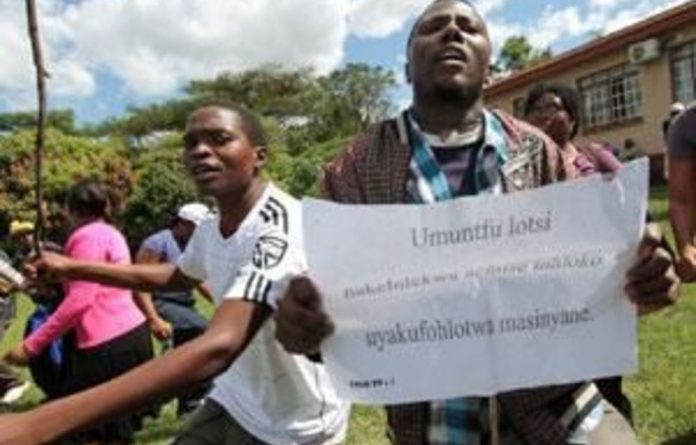 “You can use my picture and my name. I am a citizen, not a subject and if no one talks openly about the situation we will never be liberated,” said Remember Msibi, a history teacher and pro-democracy activist.

Many Swazis no longer want to be anonymous — whether in talking to the foreign media or in their everyday lives.

“In Siswati kuthula, the word for peace, also means silence. The king and his bootlickers want us to be peaceful by being silent. But we refuse to be silent about the hunger and suffering we are feeling,” said Swaziland National Association of Teachers (Snat) president Sibongile Mazibuko.

“These protests give King Mswati a chance to participate in the democracy that will eventually come to Swaziland. Now he can talk to us about a constitutional monarchy because later people will start wanting a republic like in South Africa and there will be no place for him,” she said. “Believe me, democracy will come to Swaziland and the king will be bypassed if he doesn’t acknowledge our concerns now — Yes, you can print that with my name.”

Mazibuko was in hiding when she spoke to the Mail & Guardian, sitting on the floor of the teachers’ association offices so that the patrolling police vans outside would not see her.
Earlier she was arrested, held for 12 hours and interrogated by police.

‘Still a victory’
Almost all the leaders and organisers of Swaziland’s major unions were arrested on Tuesday and again on Wednesday as the security forces — deployed heavily all around the country and especially in Manzini where the protests were scheduled to happen — sought to immobilise dissent.

Despite the crackdown on leaders and more than 500 teachers and schoolchildren who tried to march from the association’s offices to the Manzini bus rank on Tuesday afternoon, the pro-democracy movement remained buoyant.

Said Msibi: “We didn’t get the same numbers as for the March 18 protest because of the police and army clampdown but the whole world has seen that we do not live in a free society.

“They’ve seen how the king and his government have no regard for our lives and our rights. This is still a victory.”

The date of the start of the protest, April 12, was symbolic: it was 34 years ago to the day that Sobhuza II, the father of Mswati III, banned all political parties and declared a state of emergency that is still in force.

The tinkundla system of government, where the king appoints the Cabinet — laden with inept family members, people charge — and rules through a system of chiefs and indunas is just one of the protesters’ many gripes.

“We need a multiparty political system to hold government accountable. After all it’s our money, not the king’s.”

The International Monetary Fund estimates that the country has had a budget deficit of around 13% of gross domestic product in the past financial year.

There is also rising anger about the lavish lifestyle of the king, his 14 wives and their extended families. About R500-million of last year’s budget is thought to have gone to the royal household.

Protester Wandile Simelane, also a teacher, said: “The king’s birthday is coming but we don’t want to be invited. We prefer that he keep it a family affair because then he’ll spend less of our money.”

‘We don’t need this’
Simelane is angry that Mswati’s planned jubilee celebrations later this year will reportedly cost R5-million: “We don’t need this when people can’t work and are starving.”

For this father of four, the protests are about more than his pay cheque. “I can survive on my wages, but I don’t think Swaziland can survive if we continue with this unaccountable government that’s full of corrupt royal lackeys,” he said.

The monarchy is a divisive issue for Swazis. Said teachers’ association president Mazibuko: “I don’t believe in the monarchy myself, but many of our members do, so we have to be careful about how we approach democracy. We mustn’t be too critical of the king.”

Several unionists told the M&G that their criticism is of the government, not the king. Others were openly critical of Mswati.

But this week’s crackdown has not endeared the king to his subjects. Watching the riot police fire tear gas into Snat’s offices – where protesters were holed up on Wednesday afternoon – and then attempt to storm it, a passerby said: “The people have legitimate grievances and if the king is sending his men out to handle them in this way, it shows he doesn’t care for us.”
It is a view heard often on the streets of Manzini.

Vernon Magongo, an activist, said culture and tradition are being “manipulated by the king, his chiefs and indunas to ensure that the people remain passive. Swaziland needs to find a way to retain our culture without being stuck in the dark ages.”