A year on, Gulf still grapples with BP oil spill 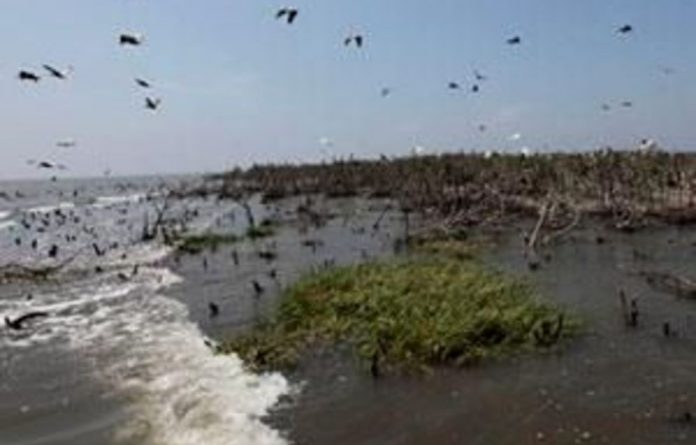 When a BP oil rig exploded and sank in the Gulf of Mexico last April, killing 11 workers, authorities first reported that no crude was leaking into the ocean.

The disaster that captivated the world’s attention for 153 days struck at 9.53pm on April 20 (02.53 GMT on April 21), when a surge of methane gas known to rig hands as a “kick” sparked an explosion aboard the Deepwater Horizon rig as it was drilling the 1,6km-deep Macondo 252 well off Louisiana’s coast. Two days later, the rig sank.

One year on, oil from the largest spill in United States history clogs wetlands, pollutes the ocean and endangers wildlife, not to mention the toll it has inflicted on the coastal economies of Florida, Mississippi, Alabama and especially Louisiana.

It was the biggest ever accidental release of oil into an ocean.

Even so, environmental damage from the ruptured well that spewed more than 4-million barrels of oil (636-million litres) into the Gulf in three months seems far less dire than the worst predictions, according to some Gulf residents and experts.

“It’s a horrible mess but it’s not the end of the world,” said Edward Overton, professor emeritus of environmental sciences at Louisiana State University in Baton Rouge.

“Some people thought it would be the end of the Gulf for decades and that’s not even near the case,” Overton said. “None of those predictions were right.”

Such considerations are cold comfort to Gulf residents who saw their livelihoods decimated by the spill. More than 500 000 have claimed compensation from a $20-billion fund set up by BP — at the insistence of President Barack Obama — and administered by Kenneth Feinberg.

The mitigated view will also do little to stem the tide of litigation that will take years to make its way through federal court in New Orleans and beyond as plaintiffs seek to extract damages from London-based BP, which owned the Macondo well, and Swiss-based Transocean, which owned the rig.

“Fishermen are still worried that there’s oil on the bottom of the Gulf. But we’ve got no control over that,” said Errol Voisin, manager of the Lafitte Frozen Foods plant in Louisiana, who spoke ahead of a new shrimping season.

‘Insult to injuy’
The National Wildlife Federation paints a picture of an ocean ecology mauled by the spill and facing a long road to recovery. Thousands of birds and other wildlife died.

Sea turtles were hit hard. The western population of the bluefin tuna, which breeds only in the northern Gulf, was breeding just as oil spewed from the ocean floor. Contamination may have reduced juvenile tuna production by 20%

In many cases, the slick compounded factors that already threatened the environment. Wetlands, for example, act as a natural barrier against storm surges but for decades oil industry penetration and other factors have eroded them.

Few places illustrate the damage more poignantly than Bay Jimmy, a breeding ground for shrimp, fish and oysters nestled in a labyrinth of waterways south of New Orleans.

Marshland around the bay still bears scars from the oil spill, with some areas ringed by dead grasses. Oil oozes from the ground just as it did last summer.

“When the oil hit, it was like adding insult to injury … The concern for us is in terms of habitat for the wildlife,” said Maura Wood, NWF’s senior outreach coordinator.

Yet for all that, assessing the spill’s impact presents a puzzle, experts say. Two examples illustrate the challenge.

“Out of sight, out of mind”
This year, 153 bottle-nosed dolphin carcasses have washed up on Gulf coasts: 65 of those were infants: new born, stillborn or born prematurely, according to figures from the US National Oceanic and Atmospheric Administration (Noaa).

The dolphins were conceived at the time of the spill, said Moby Solangi, president of the Institute for Marine Mammal Studies in Gulfport, Mississippi.

To determine the cause of death requires a necropsy, which Solangi can perform at the institute, as well as toxicological and other forms of analysis.

But in February the government halted all external investigations into dolphin deaths and turned the matter over to Noaa, which is yet to release any findings.

“It is frustrating to any scientist. Certainly we want to get results,” Solangi said in an interview.

For Samantha Joye, a marine sciences professor at the University of Georgia, the problem is the slow pace of research into exactly how oil affected the ocean.

Joye first identified so-called undersea ‘oil plumes’ during the spill and has since found evidence, such as crabs behaving sluggishly that seems to point to damage to the ocean floor. But she acknowledges more work needs to be done.

“I would like to be able to make conclusive statements about the health of the Gulf of Mexico but I can’t because there’s a lot we don’t know,” Joye said in an interview.

“There seems to be this ‘If we can’t see it, it’s not going to hurt us’ mentality. There’s no oil on the surface therefore the problem is solved. That’s just not true,” she said.

Conflicting view on economic toll
One corporate casualty of the spill was BP Chief Executive Tony Hayward, who lost his job last July in a storm of criticism over perceived insensitivity to Gulf coast residents. He was replaced by Bob Dudley.

The oil giant says it has spent over $16-billion on redress and restoration projects, with total spending estimated at $40,9-billion.

BP chairman Carl-Henric Svanberg told shareholders on Thursday the company’s response to the spill “was without precedent, and I think, has been recognised as such”.

Protesters against the spill, some from the US, demonstrated at BP’s annual shareholder meeting in London.

The disaster wiped about $70-billion from BP’s market value, knocking its share price down from $61 a few days before the explosion to $26,75 in late June. The stock has recovered to close Thursday at $45,54 a share.

BP at least is upbeat about the Gulf’s recovery.

“We are absolutely confident that the water is safe. The residents and tourists are telling us that the beaches have never looked better, the seafood is safe and delicious and I hear fishing is excellent right now as well,” Mike Utsler, chief operating officer of BP’s Gulf Coast Restoration Organisation wrote in Facebook comments published this week.

But there are no clear overall estimates of economic damage from the slick as it ripped through sectors as diverse as fishing, tourism, municipal finance, real estate, banking and services.

In fact, there are almost as many conflicting views of the economic toll as there are stakeholders on the coast.

Tom Becker, president of the Charter Boat Captain’s Association of Mississippi, said his business was down at least 50% because of a perception among potential clients that Gulf waters remain unsafe.

Rene Cross, owner of the Cypress Cove Marina in Venice, Louisiana, canceled his Cajun Canyons Billfish Classic deep sea fishing tournament last year as the government closed Gulf waters to fishing. But he is restarting the event this spring.

“We are getting reports of marlin getting caught, some nice fish. That’s a positive sign for us,” Cross said.

Many Gulf fishermen said they were waiting for full compensation from fund administrator Feinberg, a financial and psychological hardship among coastal residents who pride themselves on fierce independence.

Darlene Kimball, an oyster buyer at Pass Christian’s harbour in Mississippi, opened her receipt books to show that this time last year she was buying up to 1 500 sacks of oysters a day. Last week that figure was down to 47 on some days.

When officials inspected the offshore beds, they found large numbers of dead oysters, so they did not do the dredging necessary for the new season.

Experts are yet to identify the cause of those deaths, though tests show live oysters are clean and Gulf seafood is now the most heavily tested in the world, residents said.

“I can’t say for sure what killed the oysters because I’m no marine biologist. But what happened? They [the oysters] were there on April 20. We have not gotten paid [by Feinberg] and our business is nowhere near back to normal, Kimball said. “It’s not fair. We didn’t ask for this spill.” — Reuters

Drilling deep mistakes in the Arctic