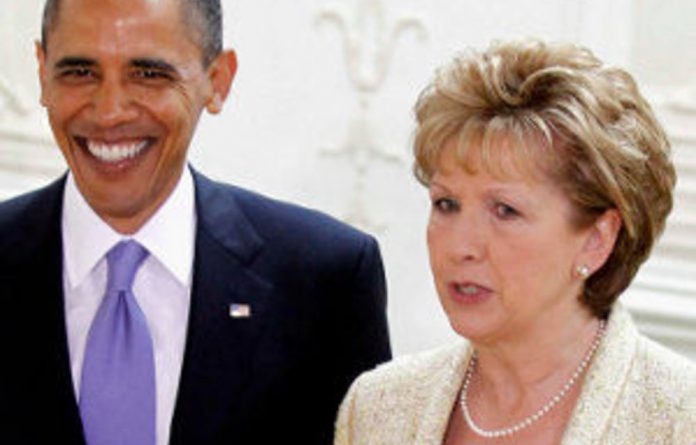 United States President Barack Obama flew into Ireland on Monday to celebrate a portion of his exotic biography and to administer a jolt of confidence to a nation battling out of a deep economic hole.

Obama and his wife Michelle landed aboard Air Force One as wind and rain whipped across Dublin airport, launching his most comprehensive European tour in two years, which also takes in Britain, the G8 summit in France and Poland.

The highlight of the overnight Ireland stay was a pilgrimage by the Hawaii-born son of a Kenyan father and white American mother to the tiny midlands village of Moneygall, home of Obama’s great-great-great grandfather.

The 350-odd residents of Moneygall in County Offaly, which has just a few shops and two pubs, have been looking forward to the US leader’s visit — expected to last just an hour — for months.

“This is going to be one of the most historic days we have ever seen,” he said.

Rocking the road to Dublin
The president was also due to deliver one of his trademark soaring speeches to thousands of Dubliners in a high-security outdoor event from the steps of the Bank of Ireland, against a backdrop of famed Trinity College.

“It’s a chance for the president to really celebrate the ties between our countries and the kind of unique feelings that the American people have for Ireland,” said Ben Rhodes, a deputy national security advisor.

Obama’s visit comes just a few days after the historic journey to Ireland by Britain’s Queen Elizabeth, who laid historic enmities to rest with the first trip to the Republic by a British sovereign since independence in 1922.

A beaming Obama quipped about the weather as he met Ireland’s President Mary McAleese at her official residence.

He also planted an Irish oak tree which will find a permanent home in Phoenix Park, close to a Sequoia planted in 1963 by the late president John F Kennedy.

Obama was also set to hold talks with Ireland’s Prime Minister Enda Kenny, expected to focus on Ireland’s bounce back from a punishing debt crisis, which culminated in an International Monetary Fund-European Union bailout.

The president’s visit will also take him on a state visit to Britain, the G8 summit in France and to Poland.

Obama’s great-great-great grandfather on his mother’s side Falmouth Kearney, the 19-year-old son of a shoemaker, emigrated more than 160 years ago, arriving in New York in search of a better life.

Parts of the Kearney house are still standing, while an upper floor has been added on the pebble-dashed, two-bedroomed home.

“O Leary, O’Reilly, O’Hare and O’Hara, There’s no-one as Irish as Barack O’Bama,” goes the ditty by the Corrigan Brothers.

“He’s as Irish as bacon and cabbage and stew. He’s Hawaiian, he’s Kenyan, American too,” it goes on.

Obama is to round off the day with a speech in Dublin’s College Green road, where one of his Democratic predecessors Bill Clinton gave an address in 1995.

A crowd of 20 000 was due to gather to hear Obama speak at a vast street party boasting acts including Westlife, the Sawdoctors and Irish Eurovision stars Jedward among the performers.

“The ebb and flow of political and social power in America reflects the changing demographics of the world’s greatest melting pot,” the newspaper said.

“President Obama may be the epitome of that energising diversity but we should all celebrate the fact that he chooses to celebrate his links with Ireland, however distant.” — AFP