Clashes on Durban streets as COP17 gets serious 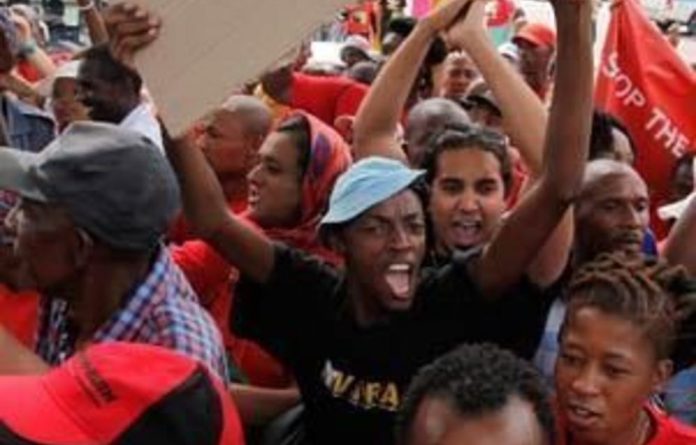 The COP17 climate talks enter their second week this week entangled in a thick mesh of issues with no guarantee that negotiators and their ministers will be able to sort them out, even as protests outside the official meetings turn ugly, with protesters complaining of violent harassment by official volunteers.

The 194-nation process is facing the prospect of a bust-up, even as scientists warn against the mounting threat of disaster-provoking storms, droughts, flood and rising seas made worse by global warming.

Cop17: Listen to the people

Thousands of activists have hit the streets of Durban to make sure their voices are heard during COP17. Representing diverse organisations and causes from around the world, they maintained that climate change negotiators need to do more.

The 12-day Durban conference is eyeing a deal which secures the future of the Kyoto Protocol, set to be cast into limbo just a year from now.

It also would seek to coax China, the United States, India and Brazil into a new treaty on emissions curbs.

At the heart of the manoeuvring is the future of Kyoto, which stipulates legally-binding targeted curbs in greenhouse gases for rich countries.

Extending Kyoto pledges
The European Union (EU) — nearly alone — has offered to extend its Kyoto pledges after they expire at the end of 2012.

But it will do so, it says, only if major emitters — including the United States and emerging giants such as China — back plans for a new binding pact that would be completed by 2015 and take effect by 2020, when the current roster of voluntary pledges runs out.

After a week of mixed signals, China declared on Sunday that it could envisage post-2020 binding commitments — provided a range of conditions, including the survival of Kyoto, were met.

For now, the United States has resisted the EU road map, saying it cannot sign up to a legal framework the contents of which have not been spelt out.

The other big question is whether India, and also Brazil, can be drawn into the roadmap-plus-Kyoto deal.

Trouble on the ground
Meanwhile, in Durban at the weekend, protesters who were attacked with water bottles and stones in a civil society march during COP17 in Durban say they intend opening a criminal case against their attackers.

The Civil Society Committee for COP17 and members of the Democratic Left Front (DLF) confirmed to the media on Sunday that they intended opening criminal cases against individuals dressed in COP17 volunteer overalls alleged to have set fire to DLF members’ placards and to have attacked them with water bottles and stones.

The Civil Society Committee said the agent provocateurs were ANC members planted at the march by the local eThekwini Municipality so as to disrupt it. The green-suited group of about 300 people engaged in skirmishes and threw projectiles at members of civil society before the march had begun.

The DLF’s Vishwas Satgar also confirmed that the organisation would approach the office of the public protector Thuli Madonsela, to “investigate what we endured, which appears to be the use of public funds by this government to attack us”.

A complaint with the police’s Internal Complaints Directorate would also be lodged, because of the “police’s failure to act against what amounted to sustained and provocation and abuse”, said Satgar.

Volunteers interviewed by the M&G said they were there “in support of COP17” and to “defend our president, Jacob Zuma”. Many claimed to be either ANC supporters or members from areas like KwaMashu and Umlazi. Several carried Zuma kangas and placards stating “100% Zuma and 100% Cop” and “Fire Malema”.

In a statement, the Civil Society Committee noted that “as volunteers {are] paid daily by the municipality of eThekwini, it is of grave concern that their intimidation of peaceful marchers was left unchallenged by those in authority. As such, the [Ethekwini municipal] manager [Mike Sutcliffe] and mayor [James Nxumalo], together with the UNFCCC, must answer to the involvement of this group and the failure of authorities to address this unnecessary violence.”

Sutcliffe said on Sunday: “I thought the march went incredibly well. I know of no disruptions and certainly together with my team in monitoring the march saw nothing to suggest otherwise. I do know at the beginning there was a small issue and we took action to defuse things and as I say the march was pretty peaceful.”

He later said: “I understand there were actually a number of incidents and am rather surprised that only one is highlighted. I also find it strange that the city is being challenged when my teams have done so much to make the civil society space work.”

Sutcliffe refused to put a figure to, or detail, the incidents his monitoring team had picked up, calling the committee’s claims “silly”. — Additional reporting by Sapa-AFP

It is 40 years since Ruth First was assassinated. What would she say about South Africa today?
Advertising