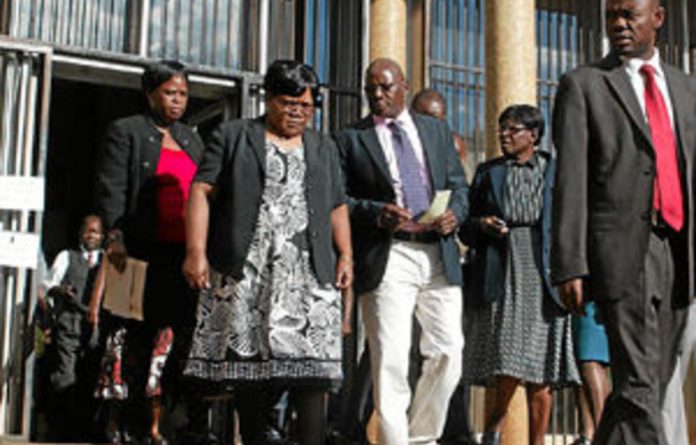 A public inquest into the mysterious death of retired army general Solomon Mujuru is testing Robert Mugabe’s grip on the feuding factions in his Zanu-PF party as suspicion and conspiracy hang over the week-long hearing.

The factions in Zanu-PF are led by Deputy President Joice Mujuru and Defence Minister Emmerson Mnangagwa, who are locked in a bitter race to succeed the 87-year-old Mugabe.

The high-profile inquest, presided over by magistrate Walter Chikwana, kicked off on Monday with a sideshow of tears, conflicting statements and visibly angry Mujuru allies.

“I think if the outcome of the inquest points towards foul play, then that will now lead to a new dimension of trying to find out who the suspects are,” said Trevor Maisiri, a senior analyst at the International Crisis Group. “This will obviously open a can of worms, which will cause a diversion from the focus that Zanu-PF has on elections.”

Chikwana is expected to present his findings next week.

The atmosphere inside the small, crowded courtroom in the Harare Magistrate’s Court reeked of suspicion and conspiracy. A police guard, Obert Mark, was driven to the verge of tears under cross-examination by Joice Mujuru and her relatives.

Mark admitted to negligence and may well take the fall for Mujuru’s death, but the consequences will probably extend beyond the lowly police constable.

Every conflicting statement made by members of Mujuru’s security detail was met with murmurs from the rows of wooden benches where his widow, her family and dozens of powerful allies sat, with prominent banker James Mushore among them.

“Everyone is watching to see if this inquest will proceed in a transparent and professional manner. If it does, this will serve to build some levels of confidence in the judiciary and investigation systems in the country,” said Maisiri.

On Tuesday police cordoned off the crowded courtroom, while dozens of people waited outside to catch a glimpse of the Mujuru family and supporters leaving the court.

Many believe Mujuru’s extensive business links — including diamond mining, cattle ranching and farming — helped his wife rise to her position and gave him more influence than his political rivals in Zanu-PF.

Also in court was Mujuru’s right-hand man in business, Tirivanhu Mudariki, and other associates who heckled the police officers on the witness stand with questions about how they had failed to save the general.

Mujuru’s family has demanded that the inquest clear suspicions about his death, brushing aside official police investigations that suggest he died in “a fire accident caused by a candle”.

The results of the police investigations were never made public and, five months after his death, Joice Mujuru and her allies continue to suspect foul play. Forensic experts from South Africa this week ruled out the use of chemicals or explosives in the fire that left Mujuru burned beyond recognition.

Clemence Runhare, a security guard who was at the farm on the night of Mujuru’s death, testified that he had heard what “sounded like gunfire”.

“After midnight, I heard a noise which sounded like the explosion of bullets coming from the direction of the Mujuru residence,” he testified. Later he retracted the statement, saying the sound had probably come from burning asbestos.

The testimony given so far by other witnesses has done little to put an end to speculation — fodder for a nation long hooked on conspiracy theories about the deaths of its top political leaders. Other Zimbabwean political luminaries who have died under suspicious circumstances include Herbert Chitepo, Lookout Masuku and Josiah Tungamirai, who are all thought to have been assassinated.

In the aftermath of her husband’s death last year Mujuru told mourners she could not understand how the highly decorated soldier had failed to escape the fire.

On Tuesday she complained that she had not been given access to statements made to the police by her husband’s police guards.

In their testimony the guards said they had been sleeping when the fire broke out and that they could not call for help because their police radio was broken and their cellphones had run out of airtime. When the fire brigade arrived hours later the truck did not have water.

Mujuru described the conduct of the men who had guarded her late husband as “shocking”.

“These are obvious and straightforward things that I think an ordinary policeman should understand,” she said, adding that she was wary of adding to the controversy.

She also refused to condemn the entire security system in Zimbabwe. “Do you think I can judge my security forces just because of one person? Do you think it will be honest or fair?”

The guards also differed about whether Mujuru had arrived alone — one guard insisted there was another man in his car. One of the guards also said Mujuru appeared drunk, contradicting the testimony of six other witnesses who said the general — known as a heavy drinker — was “sober and jovial”.

Mujuru asked in court how the police officers could not have known the location of the main bedroom, where her husband’s charred remains were found.

“I myself had some security training. You should have at least learned the structure of the house,” she said.

Whatever the outcome of the inquest, which is set to end on Friday, it has unleashed suspicions among Zimbabwe’s powerful elite and is likely to dog Mugabe’s Zanu-PF party for a long time.

As political analyst Dumisani Nkomo said this week: “Factionalism in Zanu-PF is certain to intensify as the search for truth over Mujuru’s death persists, but there is a danger that the inquest itself can end up becoming a smokescreen and be used to divert attention from the pertinent issues of the day.”

Ray Ndlovu
Ray Ndlovu has been a correspondent for the Mail & Guardian in Zimbabwe since 2009. His areas of interest include politics and business. With a BSc honours degree in journalism and media studies, Ray aspires to become a media mogul.