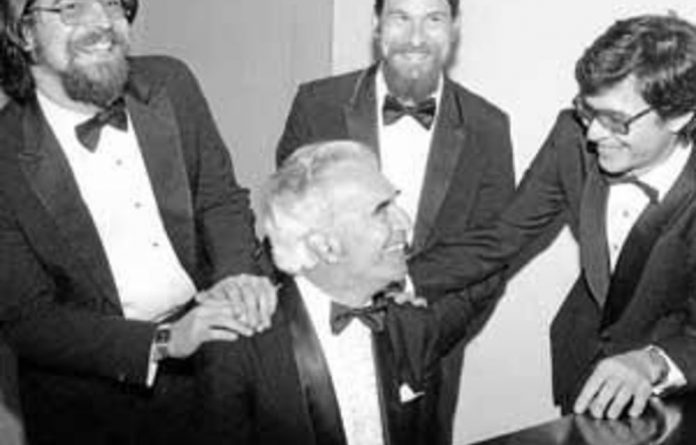 Up in the music school at the University of Cape Town, the South African Association of Jazz ­Educators has been debating topics such as “Unlocking the inner ear to advance improvisation”.

Down at the convention centre, riggers encrusted with tattoos and piercings are hammering together stages for the international jazz festival. The two worlds ought to intersect more often than they do, but this year, one jazz story features at both: the tale of Dave Brubeck.

Down the hill, Dave’s sons, the Brubeck brothers — pianist Darius, multi-instrumentalist Chris and drummer Dan — will explore the family canon in a Friday-night jazz festival concert titled Brubecks Play Brubeck. As a prelude, the association on Sunday hosted the South African premiere of the 2010 Clint Eastwood ­documentary Dave Brubeck: In His Own Sweet Way, with the brothers on hand to share memories.

Eastwood’s credentials as a jazz lover and occasional piano player are genuine and, as well as frequently seeking out interesting scores for his projects, he has made one other jazz movie, the Charlie Parker biopic Bird. That raised — and this one reprises — an interesting bunch of issues about the ingredients that make a good biography and a good jazz film.

The director’s fondness for the thumpingly obvious (in sequence, in framing, even in symbols) is his strength when the task is telling a straightforward adventure tale. It works less well when the lead is as nuanced a character as the real Dave Brubeck. At times, it reduces the story to flashcard history: “Maurice Ravel,” enunciates Eleanor Bron’s plummy voice-over and a sepia image of a distinguished-looking bloke in an old-fashioned suit pops up, then disappears.

There’s not much rhythm or swing in filmic language like that. And although Eastwood was clearly hoping to create a groove through the constant returns to the melody of Take Five, even Chris Brubeck c­onfessed to finding the device ­overdone.

A world apart
Many critics have played the race card to knock Eastwood’s Bird. The Guardian‘s David Thompson in 2008 called it “an overcooked chestnut”, noting that “the immaculate self-promoter and calculating machine in the very white Clint Eastwood is a long way from the experience, character or music of — Charlie Parker, too far to make Bird a good film, let alone a decent history of jazz.”

But discourse in film is more complex than that. Some white men can jump and Bernard Tavernier in the 1986 Round Midnight made a somewhat more musical attempt at a jazz film, raised to the sublime by Dexter Gordon’s work in the lead.

What Bird and the Brubeck biopic have in common is Eastwood’s philosophy of jazz as the product of individualism: the discourse of the heroic soloist. Rightwing commentators facilely recruit the individualism of the ­– invariably male — improviser as evidence of the essential “Americanness” of jazz. That discourse was fathered by a predominantly white, privileged, male coterie of obsessive fans-turned-writers and promoters: John Hammond, Leonard Feather, ­Martin Williams, Whitney Balliett, Ross Russell and more. Eastwood carries on the tradition and, although Stanley Crouch and Bill Cosby now get through the gates, the narrative is the same.

Apart from Iola Brubeck, every voice framed as authoritative is male.

But jazz is a collective enterprise. The magic of Brubeck’s music lay in the chemistry of his quartet, whoever actually composed Take Five. And women play, compose, organise, improvise in and write about jazz too (as they always have, back to the Bantu World’s Johanna Phahlane in Bloemfontein in the 1940s).

The self-promotion Thompson saw is still prominent: far too much footage is occupied by images of a craggy Clint exchanging fairly empty comments with such luminaries as the craggy Sting, the craggy Keith Emerson, the somewhat more glossy George Lucas and the positively cherubic Jamie Cullum. Only Emerson gets a real opportunity to demonstrate, rather than simply recount, Brubeck’s influence on his playing.

As the live question-and-answer session with his sons rapidly revealed, that space could have been used to tell far more interesting stories about Dave Brubeck. Chris was saddened that this cut of the film reduced the role of his mother, Iola. Largely portrayed as a sweetheart, mother and “the angel in the dressing room”, Iola Brubeck had also been a proactive and highly capable manager, organiser and publicist during the most important years of the Brubeck Quartet’s rise to fame.

Locked out
And South Africans watch in vain for any reference to the pianist’s ill-timed and naive but certainly well-intentioned 1976 tour of South Africa. He demanded integrated audiences and got them in Cape Town but not in Johannesburg, cutting the visit short when told that Durban would be segregated too. When his African-American bassist Eugene Wright was denied entry, he recruited Victor Ntoni to fill in and later helped him to study at the Berklee College of Music in Boston in the United States. As drummer Dan Brubeck told it, faced with heavily armed security snipers around the auditorium in Jo’burg, he admonished his son: “No rim shots!”

That is an example of what saves the film: the character of its lead. Brubeck, carrying his 90 years like a feather, is by turns impish, self-deprecating, passionate and meditative — and he still has the music in him.

Kieran Legg, both a musician and an intern writer at Independent newspapers, summed it up perfectly after the showing: “Dave Brubeck’s life was about complex time. Why did Eastwood have to film it in 4:4?”