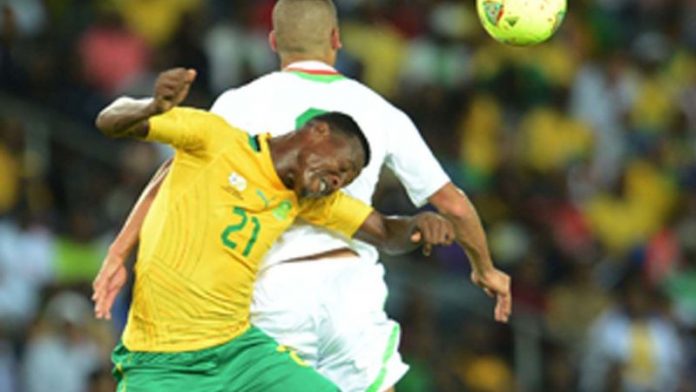 Nobody can blame Bafana Bafana for being edgy ahead of their opening Africa Cup of Nations showdown against Cape Verde on Saturday. The national team's camp is vrot with tension.

The players have been shielded from media pestering, but coach Gordon Igesund has become terser than a blocked haiku poet in his interviews.

Sensing Bafana's anxiety, President Jacob Zuma has urged the team to chillax and tune out the criticism. It's a bold political strategy (apparently based on the ideas of George W Bush) that works well for him.

But there's a big difference between edginess and edge. And it's some of the latter that Bafana urgently need to find or reveal. They have to cultivate an old-school "fuck-you" attitude if they are to compensate for their limitations and maximise their strengths.

The greatest Bafana team yet – the African champions of 1996 – had that spirit in spades.

Of course Clive Barker, the coach of that generation, had plenty of clinical ability at his disposal.

Igesund would kill for players with the sheer technical quality of Doctor Khumalo, Lucas Radebe or John "Shoes" Moshoeu. But skill wasn't the only ingredient in the recipe. Most of Barker's troops were blessed with grit and fire and earned arrogance.

At first, the giants of Africa belittled them during their early misadventures. Nigeria skipper Stephen Keshi once shared a hotel lift with tiny Bennett Masinga on the eve of a qualifier and drily asked whether he was a ball boy. Doctor was warmly saluted in Harare as "Nurse" Khumalo. But slowly, resolutely, Bafana carved out respect.

Shibobo
"That 1996 side was blessed with so many personalities. They were icons," said Barker, who is now coaching Bidvest Wits, this week. "They all had their own identities. Maybe they were born in the wrong time."

Khumalo had the regal insouciance to "shibobo" world-renowned midfielders in the first minute of a contest, thus reversing the power balance and puncturing enemy morale. This stunt was often pulled on the direct instructions of Barker.

"I would do that often," said Barker. "I went through the team before kick-off and the last player I would talk to was Khumalo. I would tell him: 'Doc, just stick the ball through somebody's legs as soon as possible.' Against Germany in a friendly game it was Andy Möller who tried to close him down and it just carried on from there. I remember the physio, David Becker, saying to me: 'I hope this game never ends.'" That December 1995 clash ended goalless, but did plenty to deepen the side's confidence.

Another player with edge, concealed by his slight physique and unfailing politeness, was "Shoes". He had the technically justified audacity to slam the ball home with a bicycle kick in the semifinal against Ghana.

Then there was the indomitable defender Mark Fish, who had the lunatic spirit to gallop upfield in the teeth of a thunderstorm and score from close range against Algeria.

Eric "Tinka" Tinkler and Linda "Mercedes Benz" Buthelezi had the inclination to kick both their opponents and the ball simultaneously – often and hard. Sometimes they let the ball off.

So what about this lot? Does Barker see any potential fire starters in this Bafana side – players who could get the mojo flowing with one flash of dominance?

"I would like to see Siyabonga Sangweni take on that role," said Barker. "He's combative and he can win battles. That could set the tone, if he starts dropping the shoulder and sorting out a few guys. It would send the right message.

"This Bafana side also has top-quality players," said Barker. "Itumeleng Khune is one of the best keepers in Africa. I honestly believe he distributes the ball better than any other keeper in the world.

Greatest defenders
"We also have two good centrebacks, but we lack a bit of variation in wide defence. The fullbacks don't do much going forward and they're not the greatest defenders either. But the middle of the park is our Achilles heel. It's normally a good area for Bafana, but I think Kagisho Dikgacoi has disappointed.

"Siphiwe Tshabalala beats a player but can't get away from him. Thulani Serero is under a cloud because he's returning from injury, but he could turn a game for you. And Katlego Mphela is a top-class player. If he holds up, he could be the key.

"The two central midfield players are workmanlike, with not much flair. Of course we didn't have that in 1996 either, with Tinkler and Buthelezi. But we were blessed that we could give the ball to Shoes and Doctor.

"But nobody is comparing those guys to this team," said Barker, somewhat unconvincingly. "We all want to move on with this generation."

Nailed to the mast
"They were pretty average," he said.

"They play a very European style, getting wide and flinging crosses in. I think we should be capable of sorting them out.

"But the Cape Verde game – that has to be three points nailed to the mast.

"If I was Gordon now, I would tell the boys: 'Look, we're up against it, nobody believes in us except our grannies and grandpas, because even our mothers and fathers don't. So cut loose a little bit and express yourselves.'

"Lastly, I would tell Gordon himself just to relax and enjoy it. It only comes once in your lifetime."

The big fat cats
Côte d'Ivoire
Didier Drogba's Elephants tried and failed miserably this week to shirk the favourites' mantle. Boasting a core of world-class experience and abundant young quality in support, the Ivorian squad is unrivalled in the draw – which is not to say they're incapable of imploding. Far from it. Rookie French coach Sabri Lamouchi is the unknown quantity. Odds to win: 7/4

Ghana
Coach Kwesi Appiah raised eyebrows by shunning the mercurial André Dede Ayew but there is enough guile in the Black Stars attack to go all the way. Egomaniac striker Asamoah Gyan returns to the scene of his World Cup melodrama, itching to silence his many detractors by firing Ghana to their first Nations Cup gold in 30 years. Kwadwo Asamoah's creativity will be pivotal. Odds to win: 7/1

Zambia
Don't be fooled by the Copper Bullets' ropey warm-up results with experimental line-ups. Chris Katongo and his defending champions are the most united and motivated force in the field and more talented than Eurocentric bookies allow. Zambia's lack of big-league manpower might prove an asset: they are aching to bully the fancy-pants teams yet again. Odds to win: 13/1

Nigeria
Will the real Super Eagles rise up under the legendary Stephen Keshi? They didn't qualify for last year's tournament and, although the squad is young and dynamic, it lacks an inspirational senior figure in the mould of Jay-Jay Okocha or Nwankwo Kanu. Much will depend on the form of Chelsea duo Victor Moses and John Obi Mikel. Odds to win: 10/1.

Mali
The Eagles achieved their best finish yet – third place – in last year's edition. And they could thrive again, with the superb Seydou Keita still in the saddle and supported by the likes of West Ham striker Modibo Maïga and QPR enforcer Samba Diakité. Morale must be affected by the civil war raging in Mali: Will it disturb or drive them on? Odds to win: 15/1

South Africa
A Bafana triumph seems an absurd thought now but, if they plot a passage to the quarterfinals, that old home-ground voodoo might kick in. But several players will need to raise their game a few notches to propel a title challenge, notably striker Katlego Mphela, playmaker Thulani Serero and central midfielders Kagisho Dikgacoi and Dean Furman. Problem is, the last two don't appear to have any notches left on their dials. Odds to win: 10/1.

Algeria
The Desert Foxes, ranked second in Africa, have emerged as plausible outside bets under the seasoned Bosnian coach Vahid Halilhodzic. In Sofiane Feghouli he will deploy a crafty number 10, and the side has all the defensive rigour you expect from Maghreb teams. But advancing from Group D – which also features the Ivorians, Tunisia and Togo – will be a mission. Odds to win: 15/1 – Carlos Amato